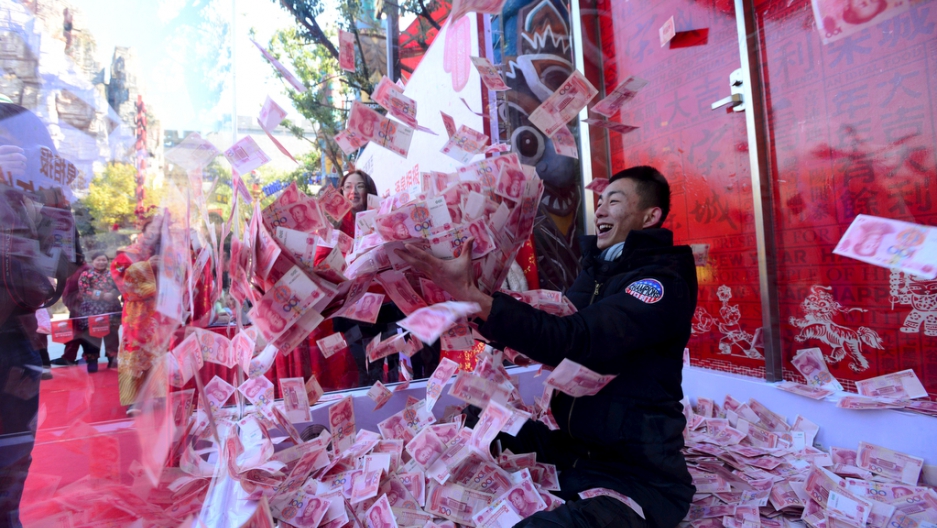 A man tries to snatch 100-yuan banknotes inside a glass cage during an event held to celebrate the upcoming Spring Festival, at a park in Hangzhou, Zhejiang province, China, on Jan. 26, 2016.
Share

China has been spending billions of dollars propping up its currency.

That might sound odd given Beijing deliberately devalued its currency in August, but it's another example of Chinese policy makers failing to anticipate the market's reaction and paying the price.

New official figures show China's foreign-exchange reserves fell by a staggering $99.5 billion last month as Beijing sold US dollars and bought yuan to stem its fall against major currencies. That's more than oil-rich Oman's economy is worth, according to the World Bank.

China's central bank still boasts the world's largest stockpile of foreign currency — worth $3.23 trillion — but it's hit the lowest level since May 2012. January's drop-off followed a record fall of $107.9 billion in December.

The data, released by the People's Bank of China on Sunday, helped fuel a sell-off in global equity markets this week and added to the already long list of worries about China's economy, which is growing at its slowest pace in a quarter of a century.

US stocks were mostly in the red on Tuesday a day after the S&P 500 lost 1.4 percent and the Dow Jones Industrial Average fell more than 1 percent. That followed sharp falls in Europe where London’s FTSE 100 dropped 2.7 percent while German and French stock indexes fell more than 3 percent.

You might be wondering what all the fuss is about. After all, $3.23 trillion is still a lot of money to have in a rainy day fund. For comparison, the world's second-largest holder of foreign currency is Japan. Its reserves are worth about $1.25 trillion. So what if China's falls by a $100 billion or so?

The problem is that December and January were not one-offs. Beijing has been dipping into its foreign currency reserves a lot lately, particularly since August when it unexpectedly devalued the yuan.

Beijing says it wanted to allow the yuan price to reflect market forces. Analysts think the devaluation was meant to make China's declining exports more appealing on the global market. But investors interpreted it as a sign that China's economy was much weaker than its leaders were letting on and dumped the currency to reduce their exposure.

That's not what Beijing had intended. Or expected. But investors were already jittery after the Chinese stock market collapse last summer and a constant stream of data pointing to an economic slowdown. For many, the devaluation was the final straw.

More from GlobalPost: China's sudden currency devaluation is a really big deal — and here's why

China has dumped $420 billion in foreign currency over the past six months, the BBC reported, as the People's Bank of China tries to avoid the kind of devaluation that could really wreck the economy.

While a cheaper currency is a positive for the manufacturing sector, which is still a major driver of the Chinese economy, it also reduces the purchasing power of Chinese consumers, which contradicts Beijing’s efforts to get people to spend more money on washing machines, cars and furniture.

And if a currency is too weak it erodes confidence in a country, deters investment, and makes it harder for companies and governments to repay foreign currency-denominated loans, potentially leading to widespread defaults.

But Chinese policy makers are creating a new problem by trying to solve that one. The more dollars they sell to buy yuan, the less the yuan depreciates. But burning through its foreign-exchange reserves to prop up the yuan might lead investors to question Beijing’s ability to maintain a stable currency.

Apart from potentially hurting the Chinese economy, it could also set off a chain reaction across emerging markets: China’s export rivals could then devalue their own currencies to ensure the prices of their products remain competitive overseas.

"While the remaining reserves still represent a substantial war chest, the mathematics around this rapid pace of depletion in recent months is simply unsustainable for any length of time," Biswas told the BBC.

"The PBOC is caught between the devil and the deep blue sea, facing a choice of either continued slow erosion of FX reserves, or a rapid currency adjustment that could be destabilizing for China and plunge global currency markets into turmoil," he told CNN Money.