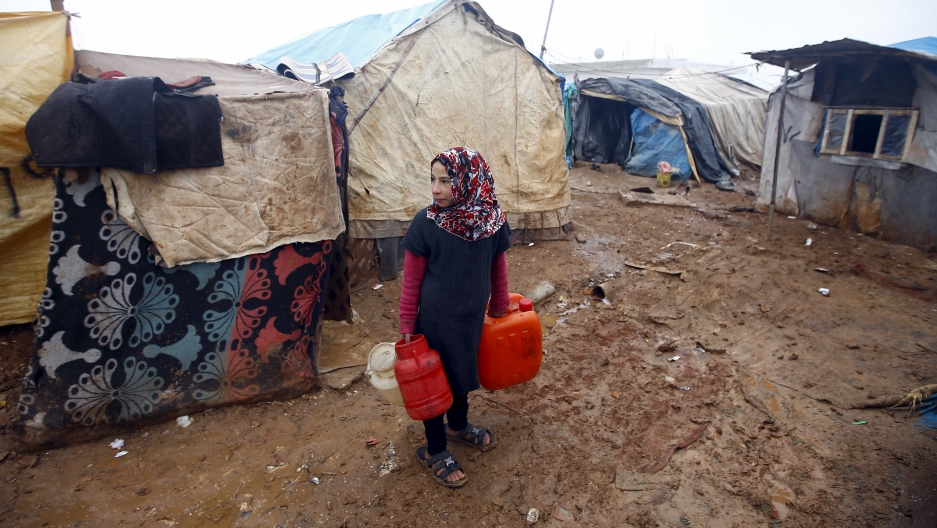 An internally displaced Syrian girl carries water cans at a refugee camp near the Bab al-Salam crossing, opposite the Turkey's Kilis province, on the outskirts of the northern border town of Azaz, Syria on February 6, 2016.
Credit: Osman Orsal
Share

Here's the latest crisis in the seemingly endless human tragedy that is the Syrian civil war: Tens of thousands of Syrians are stranded at the Turkish border with nowhere to go.

Most of them are fleeing a Russian-backed Syrian government offensive in Aleppo that torpedoed peace talks last week between the Syrian government and the opposition — the first such efforts to end the war in nearly two years — before they had even begun.

GlobalPost correspondents Richard Hall and Reem Al-Najjar report from Turkey that some of these trapped civilians are turning back as makeshift camps set up to deal with the influx have become overwhelmed. The speed and ferocity of the regime offensive caught aid organizations by surprise, and the camps in and around the Syrian border town of Azaz were hastily constructed. Many of those fleeing have been left out in the cold and rain.

“Dying is much better being than humiliated in this place,” said Ayman, a father of two from Tal Rifaat, which lies in the path of a push by the Syrian army. “There is no water, no services and my kids are sick,” he told GlobalPost by phone from the Syrian side of the border. Ayman said he would return to his hometown the next day, despite the danger.

Turkish President Recep Tayyip Erdogan says Turkey will open its borders "if necessary," but has not indicated when that might happen. Turkey already hosts 2.7 million Syrian refugees, and Erdogan is determined to show the international community that his country won't shoulder the burden of the refugee crisis alone.

Today is the Lunar New Year, and it marks the culmination for many of a seriously busy travel season in China — when millions of workers travel home to be with their families on the most important holiday in the Chinese calendar.

This year, many of those workers won't return. That’s because they may not have jobs to go back to.

And that's not the only reason the world's biggest annual human migration is shrinking, Allison Jackson explains.

In South Africa, you can get a college scholarship for being a virgin.

Under the terms of the bursary, recently given to 16 young Zulu women, the recipients must be "maidens," meaning virgins, and undergo regular virginity testing. This unusual requirement has stirred a national debate over the bursary program, which is sponsored by the uThukela district municipal government in South Africa's KwaZulu-Natal province.

Supporters defend virginity testing as a cultural practice, and claim that the bursary helps young women stay focused on their education while avoiding unwanted pregnancy as well as HIV and AIDS.

But critics argue it is discriminatory and unconstitutional.

“It may be well-intentioned, but it is a wholly inappropriate and discriminatory policy, especially in a country with high levels of sexual violence where sex is not always a choice,” said Sanja Bornman, an attorney with Lawyers for Human Rights.

Erin Conway-Smith reports on the controversy.