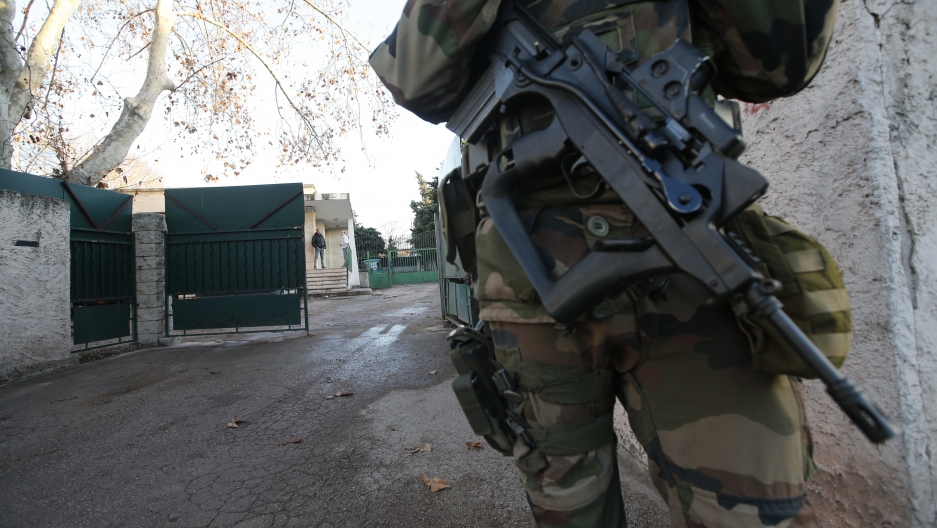 A French soldier secures access to a Jewish school in Marseille, France, January 11, 2016 after a teenager, armed with a machete, slightly wounded a Jewish teacher before being arrested. Armed guards are the new normal for Jewish institutions in France.

You could walk by Temple Kehilat Gesher in Paris without realizing it’s there — if it weren’t for the soldiers, three of them in camouflage and carrying automatic rifles standing outside.

Armed guards in camo are a familiar site at Jewish institutions in France in the year since last year's attacks on the Charlie Hebdo satirical magazine and the hostage crisis at a Jewish supermarket a few days after that.

Shortly after the attacks, the French government stationed soldiers outside Jewish synagogues all over France.

“I’m very thankful because the French army saved my Talmud Torah, my religious school,” says Rabbi Tom Cohen at Temple Kehilat Gesher, “because right after the attack at Charlie Hebdo and Hypercasher [market] the parents were frightened about ever sending their kids back to a synagogue.”

For a while, Cohen had six armed officers at his temple around the clock. The ones who were off-duty napped in his basement office.

“There was enough firepower in my front room here to take out a small village,” Cohen recalls. Originally from the US, he helped found the congregation in the 1990s.

In recent months, soldiers are only stationed out front when temple members are inside. He says they’re trying to make the best use of their time. “We’re all starting to worry [that] there's a tired factor that comes in,” Cohen says, because it’s not clear when this will be over.

Jewish communities around France are struggling to respond to verbal and physical attacks that have become disturbingly regular.

Last month, the Jewish Council of Marseille advised men not to wear their kippahs in public until the security situation improves for French Jews. This came after a series of assaults on Jews in that city in recent months, the latest with a machete. (That prompted a social media campaign aimed at getting Jews and non-Jews take photos of themselves wearing kippahs with the hashtag #tousavecunekippa — everyone with a kippah— in a show of solidarity.)

In January of this year, on the one-year anniversary of the Hypercasher market attack, a dozen vanloads of national police stood guard at a commemorative vigil in Paris.

Estelle, a French woman in her 20s who asked that we not use her last name because of security concerns, was at the vigil. She says the heavy police presence feels necessary these days, if not exactly comforting.

“In the end,” she says, “it’s the thing that keeps us safe. It’s not normal but we learn to live with it.”

France has been living with smaller attacks on Jewish institutions for some time. Marc Weitzmann, a journalist, says the situation started to escalate in 2000, around the beginning of the second Palestinian Intifada. He says Jews in France became a target for young radicalized Muslims, but the country was slow to recognize the pattern of anti-Semitic attacks.

“That's when the Jews really started to feel very lonely in the country and it's a sort of perverse dynamic. The more you say you're lonely the more you turn out being lonely because everybody thinks you're crazy,” Weitzmann says.

But since 2014 it’s become harder to dismiss the escalation of anti-Semitic incidents in the country. That January, right-wing protests in Paris included large groups of people chanting anti-Semitic slogans.

“That [chanting] was really a first,” Weitzmann says. “You know, ‘Jews, France doesn't belong to you.’ This was unheard [of in France] since World War II.”

And now growing numbers of French Jews are considering leaving the country. An estimated 8,000 moved to Israel in 2015, though Weitzman says France’s weak economy plays a significant role in the exodus and many French Jews might return. Nevertheless, he says he feels that French Jews’ sense of belonging has been damaged.

“The army in front of the synagogues,” he observes, “it protects the Jews in a way, but it also marks the definite difference. It's like a border now.”

Another woman I met at the Hypercasher memorial also feels ambivalence about the soldiers in the streets, though for a different reason.

Rosalie Solkam is not Jewish, but lives behind the kosher market. She watched the police stand-off in January 2015 from her window, terrified that a stray bullet would come through the wall. The soldiers on constant watch in her neighborhood ever since have made it hard to forget.

“It’s a little worrying. In some ways we feel safe, but we also say to ourselves that the fact that they’re still there, it’s because there’s a problem,” she says.

Since the Paris attacks in November, she adds, it’s been clear this problem is not going away anytime soon. But it’s not just French Jews and a few other groups that are the targets now.