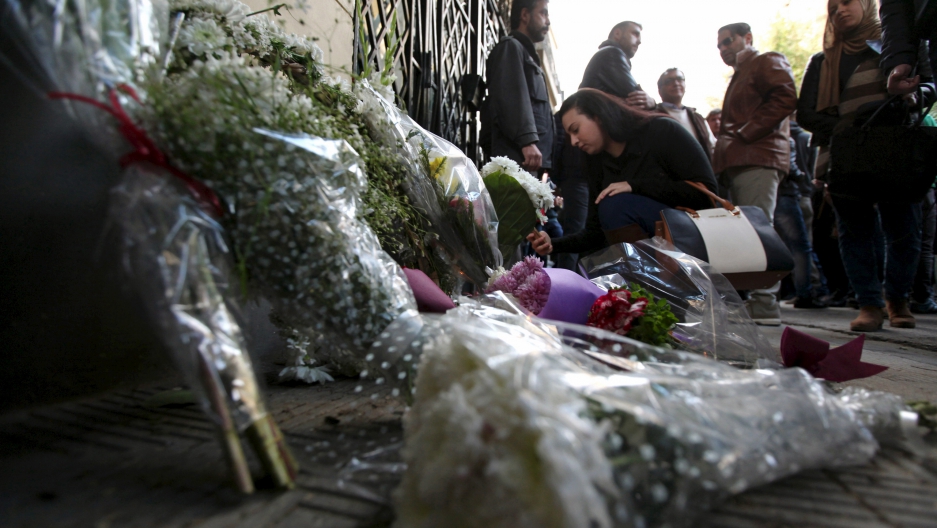 People attend a memorial for Giulio Regeni outside the Italian embassy in Cairo, Egypt, February 6, 2016.

The story of a 28-year-old Italian student named Giulio Regeni who disappeared in Egypt last month is gripping both his native country and the country where he disappeared.

He was in Egypt, researching labor movements for Cambridge University. But on January 25 — the anniversary of the Arab Spring uprisings — Regeni vanished. A week later, his body was found. And there were signs he may have been tortured.

Italy is demanding to know what happened. But a lot of details about the case are unclear.

"We know he left his apartment on the evening of the 25th. It was a big day here in Cairo. It was the 5th anniversary of the start of the uprising that eventually led to the ouster of President Hosni Mubarak," says Declan Walsh of the New York Times.

Walsh says security forces were on high alert. Protesters largely kept quiet that day, but the city was largely on lockdown. Regeni texted a friend he was coming down to Tahrir Square on the metro. “And that’s the last anybody heard of him,” Walsh adds.

Egyptian security forces remain a suspect in the man's disappearance, despite the government denying any involvement. “But the Italian government has been extremely forthright in their statements about this,” he says. “They’ve avoided directly accusing the Egyptians. But in many senses they’ve done all but that. They’ve repeatedly stressed the need for the truth. They have pointed to the quite gruesome injuries Regeni suffered before he died.”

The injuries include cigarette burns to his body, and wounds to his face.

“Italian officials are convinced the Egyptian government is behind this,” Walsh says. “And I suppose, partly that is because the injuries that he suffered are consistent with the sort of injuries that many Egyptians have suffered who have disappeared into the custody of the security forces.”

The killing comes as Washington and Cairo meet about human rights. Walsh says the issue will most likely be talked about. “Questions will certainly be asked about whether the Egyptian government is taking this seriously. And who they intend to bring to buck for this if it is confirmed that the Egyptian security forces had a hand in Mr. Regeni’s disappearance.”