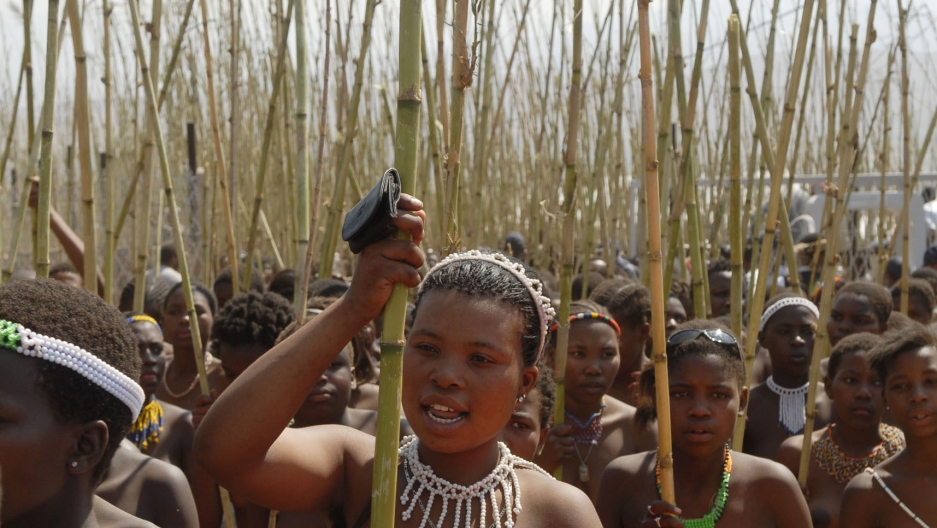 Under the terms of the bursary, recently given to 16 young Zulu women, the recipients must be "maidens," meaning virgins, and undergo regular virginity testing.

This unusual requirement has stirred a national debate over the bursary program, which is sponsored by the uThukela district municipal government in South Africa's KwaZulu-Natal province.

Critics argue it is discriminatory and unconstitutional. But supporters defend virginity testing as a cultural practice, and claim that the bursary helps young women stay focused on their education while avoiding unwanted pregnancy as well as HIV and AIDS.

On Friday, residents of uThukela, including "maidens" and “maidens’ matrons” who look after and test the young women, marched to the town hall in support of the bursary.

"Young girls are more vulnerable," Dudu Mazibuko, mayor of uThukela, told Eyewitness News. "They are the ones that fall in love with sugar daddies, get diseases and fall pregnant and then their lives are messed up."

More from GlobalPost: The new front line in the fight against HIV: 'Sugar daddies'

The young women are required to be “tested” while home for holidays. This involves lying on a grass mat and being inspected by elderly women who check to see if the hymen is intact.

If the students are found to have lost their virginity, they will lose their bursary.

A 22-year-old pharmacy student who received the award told local media that her family didn’t have enough money to pay her college tuition fees.

"They asked me if I was a virgin and if I tested regularly and I said yes. I am proud to be a virgin, I did not know it could open so many doors for me,” she told News24.

The young woman, who was unnamed, said she didn’t mind the tests, explaining: "They open the vagina and look, but they don’t insert anything in it. I have never heard of them getting it wrong."

"My father has two wives and he is already struggling to cope," she added. "This motivates me to do well and give back at home."

"Virginity testing" is also standard for young women participating in the reed dance, a traditional ceremony held yearly by King Goodwill Zwelethini, leader of the Zulus.

More from GlobalPost: Probing vaginas is the only way to test a woman's morality, Indonesia's military assures us

“It may be well-intentioned, but it is a wholly inappropriate and discriminatory policy, especially in a country with high levels of sexual violence where sex is not always a choice,” said Sanja Bornman, an attorney with the group's gender equality program.

Bathabile Dlamini, the South African minister of social development, wrote in a column this past week that arguments in favor of virginity testing are “at best, misguided,” adding that they “provide a convenient screen for a patently harmful practice steeped in patriarchal practices that serve to oppress women.”

“Girls under the age of 18 cannot be subjected to virginity testing. It is against the law,” she wrote. “Girls over the age 18 must, under the current law, must give informed consent. This does not include coercion through making access to resources to study a condition for that support. That is discrimination and not consent.”

The South African Human Rights Commission as well as the Commission for Gender Equality have said they will investigate the bursary program. Mazibuko said she will consult with uThukela district communities on whether or not to continue with the award.