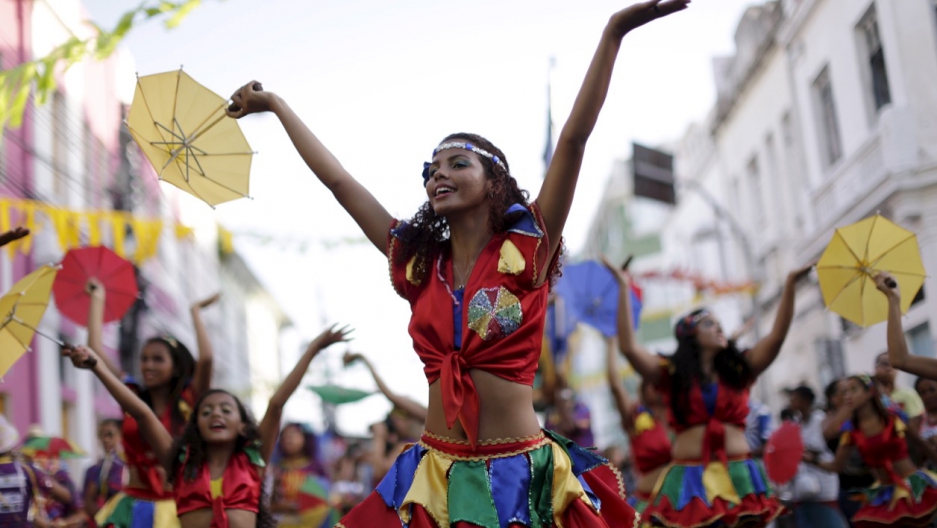 Revelers in Recife, Brazil are out in the streets for Carnival festivities. That means lots of skin on display for bloodthirsty mosquitoes.
Credit: Ueslei Marcelino
Share

RECIFE, Brazil — “I’ve had Zika. It was horrible. I want to buy mosquito repellent, but it’s too expensive. It’s 8 reais [$2] a bottle, and that’s my food money.”

Twenty-one-year-old Juliana Markues is sitting outside a hut in a slum that clings to the banks of the Sao Francisco River in Recife, northeast Brazil. At this early hour, the mosquitoes swarm beneath the slats at her feet, buzzing in the fetid space between the beach of trash and the hovels above.

This impoverished city, home to more than 3 million people, has become the epicenter of an international health crisis over Zika, a virus carried by particular mosquitoes. Experts strongly suspect the disease has caused an increase in babies born with abnormally small heads, known as microcephaly.

Cases of suspected microcephaly spiked late last year in Pernambuco state, of which Recife is the capital, reaching alarming proportions. That set off what the World Health Organization declared is a global health emergency.

The United States Centers for Disease Control is calling for "enhanced precautions" when visiting Zika-hit countries across the Americas, part of Africa and the Pacific Islands — including using condoms or refraining from sex. One Brazilian official even said pregnant women should beware of whom they kiss, after scientists found Zika in saliva. Eritania Maria, who is six months pregnant, is seen in front of her house at a slum in Recife, Brazil, Feb. 2.

As GlobalPost reported Wednesday, the number of newly reported microcephaly cases in Pernambuco has dropped off significantly in the first weeks of 2016 from the peak in November. But experts warn that without radical action from the government and citizens, northeastern Brazil could face a similar increase in babies born with small heads later this year.

It’s a case of delayed reaction: Mosquitoes multiply and spread diseases quickly during this region's wet season — which is now. As Carnival brings millions of revelers onto the streets in scanty costumes, Recife’s mosquitoes feast on the bare flesh, potentially passing on Zika, as well as dengue fever and the chikungunya virus, with their bites.

Experts say women who are pregnant during these hottest, rainiest months of December to March, and who contract Zika during their first trimester, could go on to give birth to babies with microcephaly in September to December — exactly when last year’s big spike happened.

“The fear is that we’ll have this big increase in Zika cases now and in March, and that the pregnant women infected will start giving birth in November,” said Dr. Angela Rocha, a pediatric infectologist at the Oswaldo Cruz University Hospital in Recife, who was one of the doctors to first spot the microcephaly increase. Just how bad a delayed reaction could be depends on what’s happening right now in cities like Recife, said Uriel Kitron, an expert in tropical infectious diseases at Emory University in Atlanta.

A new wave of Brazilian microcephaly cases later this year “is a definite possibility,” Kitron said. “It depends on people’s behavior and whether that changes in these months.”

Unlike last year’s rainy season, in 2016 Zika is high on everybody’s minds in Brazil, especially pregnant women. Kitron expects that people will be far more careful not to get bitten by mosquitoes during the current wet season than they were in previous years.

In theory, that sounds reasonable.

But in slums like the one Markues lives in, buying mosquito repellent or even covering up or staying inside to avoid mosquitoes are less of an option. In these hot, wet months, residents escape crowded, humid huts to sit outside, where the mosquitoes lurk. Mosquito-borne diseases have long been a problem here, but this new threat has residents spooked.

“I’m really scared,” said 14-year-old Thaissa Alves, who was sitting with Markues. “There are mosquitoes everywhere — look at them.”

Though northeastern Brazil has witnessed a modest economic boom in recent years, the nation is battling a deep economic crisis. Recife remains a city of crumbling and decrepit infrastructure, with foul open sewers running through even some of the most gentrified neighborhoods.

As Rocha points out, mosquitoes aren’t picky. They’ll bite a billionaire as soon as a child living on the street. But richer residents can climb into air-conditioned cars or stroll air-conditioned malls to escape the heat and the bugs. They can buy comfortable long-sleeved shirts and light pants and drench themselves in repellent, unlike people in the poor neighborhood.

One factor that could limit this year’s impact of Zika, however, makes no distinction between socio-economic groups. Kitron, the Atlanta infectious disease expert, said a hugely important element of the crisis will be how many people have already built up immunity to Zika, or will do so in the coming months.

Except for at least one case thought to have been sexually transmitted, Zika mainly thrives when mosquitoes pass it from person to person. But many people who catch Zika display no symptoms at all — the CDC says 1 in 5 actually become sick. If they do, the symptoms are usually mild and can include fever, rash, joint pain or red eyes, that last a few days to a week.

Several international firms and research groups are working on developing a Zika vaccine, but experts caution that could take years.

Over time, the population should hopefully build up immunity to the virus, Kitron said. As more people become immune, the spread of the virus should slow, he said.

However, Kitron cautioned that this virus has so far refused to play by the rules.

“Zika has been surprising us,” he said.