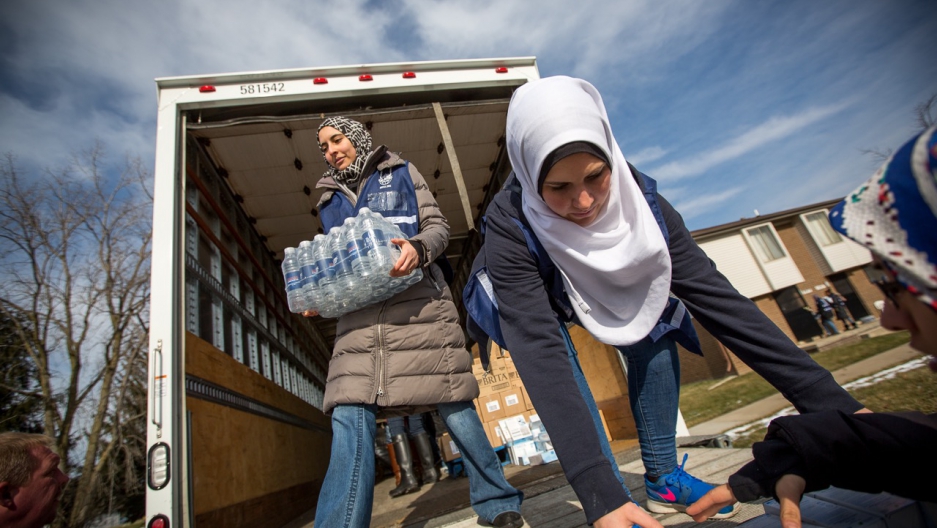 I met Abdullah Shawky last fall on the Greek island of Lesbos in the midst of the refugee crisis. He's a regional emergencies director for Islamic Relief USA and had come to Greece with a small team to offer aid to the refugees.

The day we met, the Greek coast guard had rescued refugees at sea and towed their boat into the port of Molyvos. I watched as Abdullah and two of his colleagues, Rihab Aslami and Fahima Rakmansi, greeted the wet, frightened people and helped them navigate their dramatic arrival to Europe.

They were a blur of activity and in high demand because of their Arabic and Farsi language skills. Abdullah was born in California to Egyptian parents and now lives in Dallas. Rihab and Fahima both live in California, but came to the United States as refugees from Iraq and Afghanistan. In an interview with PRI's The World from Lesbos last fall, I talked about how moving it was to see former refugees helping new refugees. 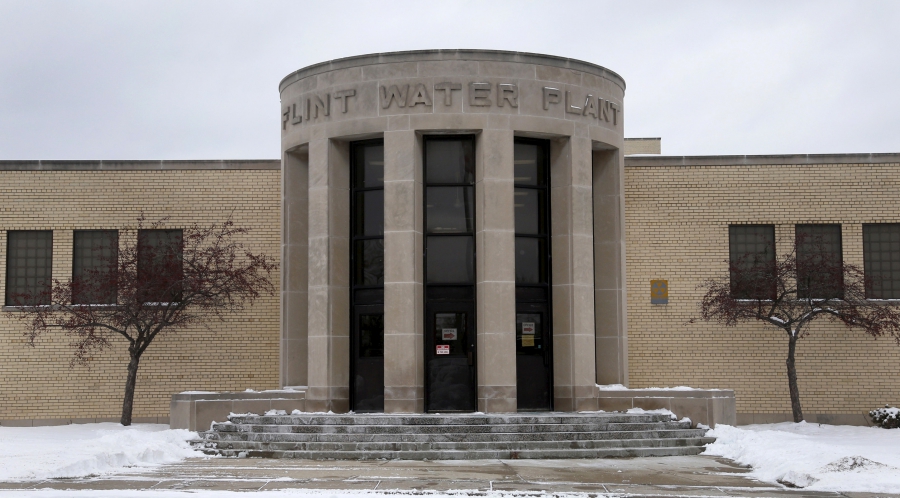 The front of the Flint Water Plant is seen in Flint, Michigan January 13, 2016.

A few months later I was back in the US and called Abdullah. Among other things, I wanted to know how the climate of increasing Islamophobia was impacting him. He told me, in his characteristic upbeat manner, that he wasn’t very concerned. It was nothing more than the usual election-time political rhetoric; people continued to appreciate their work.

As an example, he told me that when his team deployed to help survivors of a Texas tornado in December, many people went out of their way to thank them and say that not all Americans think like Donald Trump.

Islamic Relief’s next deployment, he told me, was to Flint, Michigan, where lead in the drinking water has caused a major health emergency.

The last time I saw Abdullah, he was distributing bottles of water and other supplies to Syrian refugees in Lesbos; now he was doing something eerily similar in the US. Since the disastrous decision to swap the city’s water supply to the corrosive Flint River two years ago, Flint’s tap water has been contaminated with dangerous levels of lead. Islamic Relief has joined with the Red Cross, FEMA and many other agencies and volunteers in a massive effort to distribute bottled water and filters to some 30,000 homes.

When I arrived in Flint, I joined Abdullah at the Flint Islamic Center to watch as they recruited volunteers for Saturday and Sunday. It was Friday and Imam Muhammad Abdullah Waheed was delivering his weekly khutbah, or sermon. I pulled my scarf over my head and sat among the female worshippers in the back of the mosque and listened as the imam urged everyone to volunteer for Flint. “There’s a community in Flint that needs help,” he boomed in English, peppered with a little Arabic. “It’s our community. They’re going through a water crisis. Who’s going to support?”

As Abdullah worked the crowd after the service encouraging as many people as possible to sign up, I sat down with Imam Waheed in his office. “Sometimes people have this misconception that we are serving people of the same faith. That isn’t true,” he told me. “As Muslims, we are taught by our prophet and our tradition that we need to serve everyone, irrespective of what ethnicity or religion.”

Most of the approximately 1,500 Muslims in the greater Flint area live in the suburbs and aren’t directly affected by the contaminated tap water. But the imam is adamant that the entire community should show up and help. He also feels it's the best response to bigotry. “So how do we combat it? We don’t do it forcefully, neither do we do it insultingly,” he said. “The best tool is performing virtuous and compassionate acts for those who are suffering from the water crisis in Flint.” 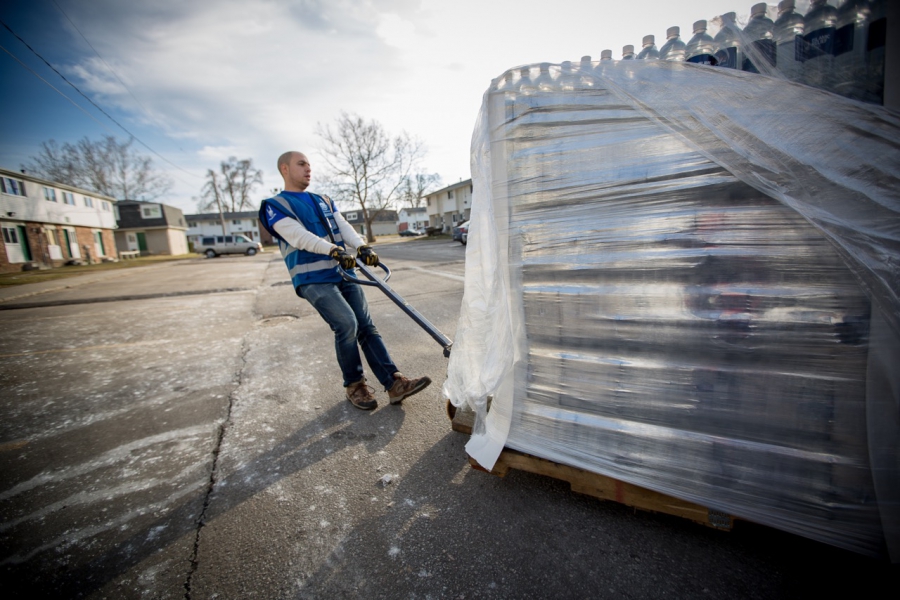 Abdullah Shawky pulls a dolly of water for residents of Flint, Michigan.

The next morning the Islamic Relief staff and about 75 volunteers headed out to public housing projects in north Flint, an economically depressed area of the city. I walked along with a gaggle of young people in blue and white “Islamic Relief” vests as they pulled heavy dollies of water down the hall, knocking on doors and calling out “volunteers with water.”

I chatted with a few residents in the hallway about how difficult it is to use bottled water for all their household needs. Eugene Walker, who is about 6-foot-4, told me that having to bathe with bottled water made him feel like an infant: “When you first have a newborn baby and you have to do the baby in the sink — that’s what it’s like, like I’m reliving a baby’s life all over again.”

Later Angela Howell, a 57-year-old retired Flint resident, told me how angry she was. “When you get a case of bottled water per household and you have to drink off that water, cook on that water, wipe your kids’ faces with that water — it’s not working. You shouldn’t have to live like that. We’re not a third world country. We’re America. We’re the strongest country in the land.”

As they hauled their empty dollies back to the truck, I spoke with Zanib Salman, a high school teacher, about why she had come all the way from suburban Detroit to help. “According to the UN, water is a basic right and unfortunately this community is not getting access to that basic right,” she said. “I live in Canton. I grew up in Bloomfield Hills in Troy and the disparity between the communities is troubling.”

The next day, I head out with Abdullah in the truck. When we reach our destination, a housing complex in north Flint where Islamic Relief is suppose to hand out water, we find an empty corpse of a building. Flint has fallen on hard times since its heyday in the 1980s when GM still employed some 70,000 people. The population has shrunk in half and much of north Flint consists of half empty blocks with burned out, boarded up or dilapidated housing.

I never found out how it was that Abdullah was given that address. It seems not even the Red Cross knows which buildings are abandoned.

Over the last two weekends, Islamic Relief has distributed two semi-trucks full of water — that’s one 24-bottle case each for 3,000 households. FEMA, the Red Cross and many other agencies, businesses and individuals are also helping in the mammoth effort. Approximately 30,000 households need water every day.

Even though the city switched back to the Detroit water system in October, test results from January 31 still show unhealthy lead levels in many homes. It’s not clear how long it will be until the drinking water is safe again. For now, the clean water people require does not reliably come out of the tap in Flint.

Abdullah continued to drive. “It literally looks like a war zone out here,” he said as we passed through block after block of abandoned, burned and gutted houses. “There are certain blocks that are so run down they resemble pictures out of [bombed] Syrian neighborhoods.”

We started talking about the Syrians on Lesbos again, where we met. We saw thousands of refugees forced to leave home and seek safety elsewhere. Now, in Flint, we were again seeing people where were seeking safety — but inside their own homes.

“The similarities are pretty striking,” he said about the refugees and the people in Flint. “If anything here, they resemble internally displaced peoples within their own country. How can this be happening in the United States?”