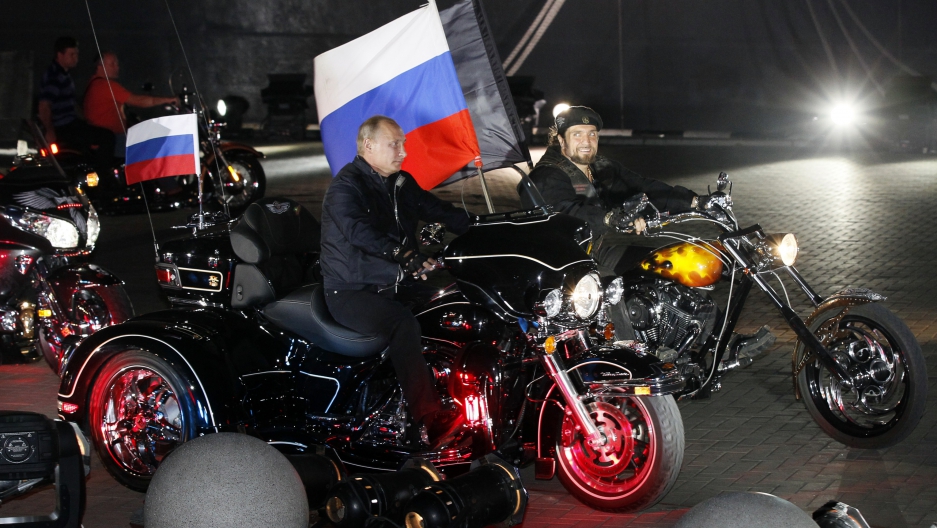 President Putin has used the Night Wolves in public appearances. In 2011, he rode with the group in the Russian city of Novorossiisk.

Their mission, as they see it, is to play a part in securing the region’s independence from Kiev.

Jack Losh is one of the few Western reporters to have spent time at the Night Wolves’ Luhansk base, as part of a reporting trip with film-maker Sebastian Rabas. “It was certainly one of the weirder weeks of my life, that’s for sure,” he says. “They combine fierce patriotism, pro-Putinism, and orthodox Christianity with quite an intense, post-industrial, sort of Mad Max aesthetic. So there are huge rusting gates at the entrance, spent artillery shells decorating the place and blown up tanks salvaged from the battlefield."

According to Losh, the Night Wolves have followed a surprsing ideological journey from their origins in the 1980s. Originally, they formed in the Gorbachev era as a rebellious anti-Soviet subculture, inspired by American rock music and biker culture.

But that ideology has mutated, even as the clothes and music have remained the same. The modern Night Wolves are now proud supporters of the Russian state and are particular fans of President Vladimir Putin. Putin himself has even appeared on a bike at a Night Wolves rally. Russian opposition activists claim that the Kremlin also provides financial support to the group.

Losh says many of the members are well aware of the changes their tribe has gone through. “They started out as this gang on the fringe who listened to western rock music, to [now] becoming part of the Putin Show. For sure, they’re one of the weirder episodes of the Putin Show, but they’re there to spread the gospel for him."

The expansion into eastern Ukraine marks a further departure for the group. Whereas in the past their main purpose was mainly political, their new objective is also military. Night Wolves members have taken part in the fighting in Ukraine, and are currently undergoing weapons training at the base. According to Losh, the group’s members see taking part in the Ukraine conflict as part of their national duty.

“Many of the guys we met had fought on the front line. Some had been killed. And probably some of them had killed Ukrainian troops as well. They look back at the USSR with great nostalgia, and for them that was lost when the USSR fell and all they got was McDonald, jeans and chewing gum," Losh explains.