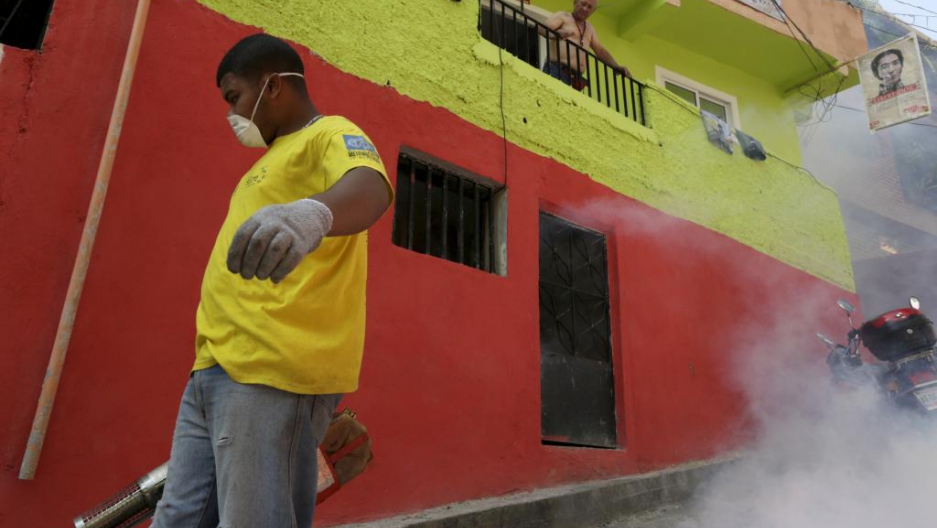 A municipal worker fumigates the Petare slum in Caracas to help control the spread of the mosquito-borne Zika virus, February 3, 2016.

The world’s attention may be focused on the Zika outbreak in Brazil, but there’s a chance the spread of the disease could be even more intense in neighboring Venezuela.

That is the conclusion of doctors in the crisis-hit South American nation, whose response to the virus has been hampered by a collapsing health system and the government’s failure to release reliable numbers about the spread of the mosquito-borne disease.

Doctors in Brazil fear the virus is responsible for a spike in cases of microcephaly, babies born with unusually small heads and potential brain damage. The worst affected state is Pernambuco, in the Brazilian northeast, near Venezuela. Zika has also been associated with the rare and debilitating Guillain-Barre syndrome in adults.

But independent experts in Venezuela believe that Melo’s figures are an underestimate by two orders of magnitude, and blame the government for covering up the true extent of Zika.

Julio Castro, a professor of tropical epidemiology at the Central University of Venezuela, says he believed between 250,000 and 400,000 people had been infected with Zika in Venezuela. He calculated those numbers by feeding the government’s limited official data and other reports of unexplained fever cases into epidemiological and mathematical models, he said.

Other Venezuelan experts, including some from the independent Network to Defend National Epidemiology, have come up with similar projections.

If those numbers are correct, that would mean Venezuela, with its 33 million people, could have a higher per-capita rate of Zika infection than Brazil, which has 205 million people, and where officials estimate there have been between 500,000 and 1.5 million infections.

Castro added that there are other reasons to believe that Zika is several times more prevalent in Venezuela than Brazil. They include the fact that Aedes aegypti, the mosquito that carries the disease, is present in 16to 20 percent of Venezuelan homes but just 4-5 percent of Brazilian homes, he said.

“The first thing the government needs to do to start tackling Zika is provide the public with reliable, trustworthy information,” Castro said. “That has not happened up to now.”

Huniades Urbina-Medina, president of the Venezuelan Pediatric Society, agreed, warning that he feared Venezuela could be on the brink of a more concentrated wave of microcephalic births than Brazil has witnessed.

“We can expect the first births from mothers potentially exposed to Zika in March and April and right now, we simply have no idea what is coming,” he said. “That lack of information and transparency [about the number of Zika infections] would be unthinkable in a serious country. Of course, I am extremely concerned.”

Urbina-Medina also cited the government’s dropping of its weekly public health report, which included current numbers of cases of infectious diseases. “Remarks from officials every now and then, on an ad hoc basis, are not enough for us to be able to address this problem,” the doctor said.

This is not the first time the self-styled “Bolivarian” socialist administration of President Nicolas Maduro, the political heir of the late Hugo Chavez, has been accused of failing to acknowledge the true extent of a tropical disease.

The Health Ministry failed to respond to GlobalPost’s requests for comment.

Venezuela has been staggering through a deep economic crisis for several years, with the world’s highest inflation rate and shortages of all kinds of basic goods, including medicines and hospital equipment.

Tales of horror coming from Venezuela’s crippled healthcare system include unnecessary mastectomies for breast cancer patients due to the lack of functioning radiotherapy machines.

Urbina-Medina says that, with the exception of a single government hospital in Caracas, Venezuela even lacks the supplies to test for Zika and give definitive diagnoses.

Just as worryingly, the doctor says a shortage of new machines and parts to repair old ones means many hospitals in Venezuela are unable to carry out ultrasound scans to determine the health of babies in the womb.

“Venezuela is not in a position to address public health crises,” Urbina-Medina said. “Right now, there is a national deficit of 70,000 intensive care beds. The future is very dark for our patients, and even for our doctors as they are especially exposed to Zika.”

This story was crossposted from our colleagues at GlobalPost.