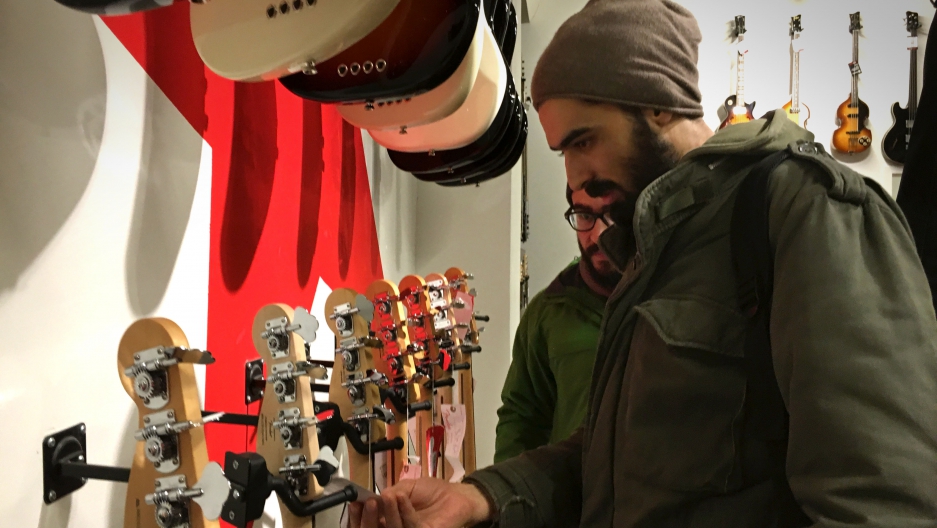 Anas Maghrebi at a music store in central Berlin. He and his Syrian band Khebez Dawle turned their journey from Turkey to Germany into a series of concerts.

On New Year’s Eve, Anas Maghrebi and his band Khebez Dawle played for a packed theater in Cologne, Germany.

“When you’re on stage you start to think, where am I exactly? Why am I here?” Maghrebi says.

This wasn’t how he had expected to be spending this New Year’s Eve.

Maghrebi formed Khebez Dawle in Damascus in 2012 when he was still optimistic about the Syrian uprising. Khebez Dawle literally means “government bread” — the type the state provides at a subsidized price.

“It used to mean to Syrian people a lot more than just food. It has this symbolic meaning — stability, safety, independence. As long as this bread is available everything is okay,” Maghrebi says. “It’s great, it’s delicious. I miss the taste actually, but it’s not enough.”

For a while Maghrebi produced and uploaded politically charged music from his home in Damascus, but after a fellow musician was killed, he fled to neighboring Lebanon.

“The Syrian uprising was going somewhere really dark. So, at some point, there was no job for people like me. I’m not the one who would [take up] weapons,” he says.

Maghrebi spent two years living in Beirut. The band had a few regular gigs, but Maghrebi’s legal status was in jeopardy; job prospects were scarce and the music scene relatively small and poorly funded. It was starting to sink in that there was little chance at a future in Beirut.

Maghrebi sold almost everything he owned, except his harmonica and an old melodica, put them in a backpack with a few clothes and flew to Turkey to meet the other members of his band who had left for Turkey months earlier.

“The agreement with the smugglers happened in Istanbul,” he recalls.

Like hundreds of thousands of other refugees, Maghrebi and his band mates made the risky journey across the Aegean Sea, arriving on the Greek island of Lesbos.

“That was a really surreal moment, a really remarkable one,” he says. “We landed on a hotel beach. Tourists were tanning on the beach, under the sunshine, having a good time, and all of a sudden this rubber boat with 16 young guys [arrives on the beach].”

Refugees crawling out of boats is now a regular sight on Lesbos, but Khebez Dawle made a different sort of entrance.

“We introduced ourselves as a band [and] we gave them our CDs from the bag,” Maghrebi says.

From there, the band followed the route of many Syrians before them, up through Macedonia, into Serbia and on to Croatia.

“In Croatia, we did our first concerts on the way,” Maghrebi says.

Some activists suggested they play in a refugee camp about 50 miles from the capital, Zagreb, but to Maghrebi’s surprise, most of the people who showed up were Croatians, not refugees. Word spread about the concert and the owner of one of the biggest venues in Zagreb asked them to play a show.

“It’s a venue that hosted Mogwai and God is an Astronaut. They are well known post-rock bands,” Maghrebi explains.

“What happened with the concerts, I started to think ‘the word tour, when bands say that,’ what does it mean? Isn’t this a tour?” Maghrebi asks.

They were invited to play two more shows in Austria.

“We started to get a lot of requests for gigs in Germany and all around Europe,” he says.

When I caught up with the band they were in central Berlin, living in refugee shelter. They say the bureaucracy is tough to deal with, as is the need to live off the small amounts provided by the German government.

And there’s concern that Germany’s welcome for Syrians and other refugees might be cooling. The same night that Khebez Dawle played to the packed theater in Cologne, hundreds of women reported being mugged, groped and assaulted by groups of men of Arab and North African origin, outside Cologne’s cathedral and train station. And those attacks have prompted calls to make it easier to deport failed asylum seekers.

Still, for Khebez Dawle, they’ve found a community of musicians and artists in Germany and along their journey that has welcomed and supported them.

“Especially during the journey, they made me almost forget about all these stupid stuff we invented — passports, borders, fences,” Maghrebi asks.

And those borders are still a real barrier. Khebez Dawle just signed with booking agent that will organize gigs for them across Europe — a real European tour — but they’ll have to wait until June. Until then, they are not allowed to leave Germany. It’s a condition of their asylum application, but they say, that’s fine.

“Because the plan originally, for all of us,” says Maghrebi, “was just to reach to this destination.