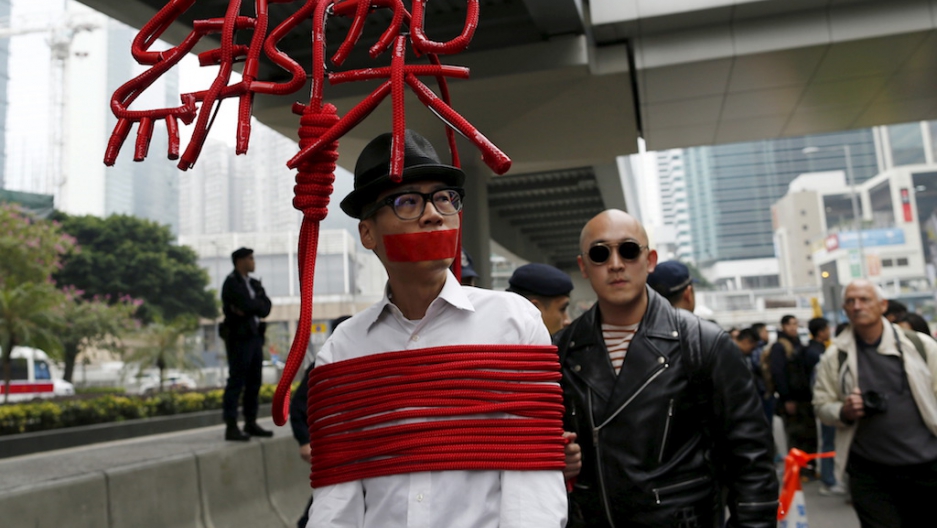 An artist ties himself with a rope that spells out "Kidnap" during a protest over the disappearance of booksellers in Hong Kong, Jan. 10, 2016.
Credit: Tyrone Siu
Share

BANGKOK, Thailand — Flee China if you dare. But know that, even in foreign lands, your criticism of the Communist Party may be punished if Chinese agents find you and spirit you back to the mainland.

That’s the message China’s government is sending to citizens who dare to dissent.

Recent months have seen an unprecedented expansion of China’s power to snatch up detractors across borders. Under mysterious circumstances, critics of China’s ruling party have been yanked from various foreign countries as well as the quasi-autonomous city-state of Hong Kong.

These operations are increasingly brash. In Myanmar, Chinese authorities captured the teenage son of two detained rights lawyers with the cooperation of mountain-dwelling rebels. In Thailand, four critics recently swept back to China include two men with United Nations refugee status.

Others snatched from Thailand: a journalist, detained in January while preparing to seek asylum, and a publisher with dual Chinese-Swedish citizenship. The latter, Gui Minhai, later appeared on Chinese state TV weeping and claiming unconvincingly that “returning to the Chinese mainland and surrendering was my personal choice.”

Foreign citizenship also failed to protect bookseller Lee Bo, a Hong Kong resident with a British passport. After his Dec. 30 abduction in Hong Kong, he claimed in an equally improbable letter, written from an undisclosed detention center, that he simply volunteered to go to prison in mainland China.

More from GlobalPost: Hong Kong's publishers keep disappearing. Its autonomy could be next

Few are convinced that established critics of China’s authoritarian regime would suddenly decide to rush into its arms. All are now at “the mercy of a criminal justice system where torture and other ill-treatment to extract ‘confessions’ remains widespread,” according to Amnesty International.

Their offenses include publishing exposés and reports on scandals that embarrass the Communist Party. Some of them amount to substantial accounts of abuse. Others are closer to National Inquirer-style tabloid fodder. At the time they disappeared, Lee and Gui, both Hong Kongers, were prepping a salacious book on the Chinese president’s love life.

But in the eyes of Chinese authorities, that’s enough to lump them in with what Communist Party mouthpieces call “Hong Kong’s radical camp” who are “confused about their identity.”

China’s increased brazenness in grabbing critics-in-exile may be worrisome. But it’s really not so shocking.

After centuries hobbled by colonial invasion and gruesome civil war, China is now eager to solidify its historic position as the dominant force in Asia. China has been Southeast Asia’s top trading partner since 2009. With that status comes perks for struggling nations: arms sales, loads of tourists flashing cash, construction of a sprawling rail line across the region and more.

Better yet, while the US incessantly needles Southeast Asian countries over their abuses, China keeps its mouth shut.

That may encourage Thailand, controlled by a military regime, to cooperate when China seeks out dissidents living in tropical exile. Thailand’s foreign minister, himself an army general, even gushed late last year that he would “fall in love” with his Chinese counterpart if only he were female.

The hard-learned lesson for Chinese dissidents: If you plan to flee, try to flee farther than China’s backyard.

Prominent classified intelligence leakers sought by America — namely Julian Assange and Edward Snowden — have sought refuge with the help of Ecuador and Russia, among a small number of nations willing to defy the world’s leading superpower. Likewise, as China ascends, it too is expanding the pool of countries willing to help capture dissidents on the lam.

That’s why one of the more recent detainees — Lee Xin, the journalist nabbed in Thailand — previously tried to travel to the US to seek asylum. He was too late. Instead, he vanished on the border of Thailand and Laos, two authoritarian nations that would rather endure a chorus of condemnation from Western rights groups than infuriate loyal allies in Beijing.