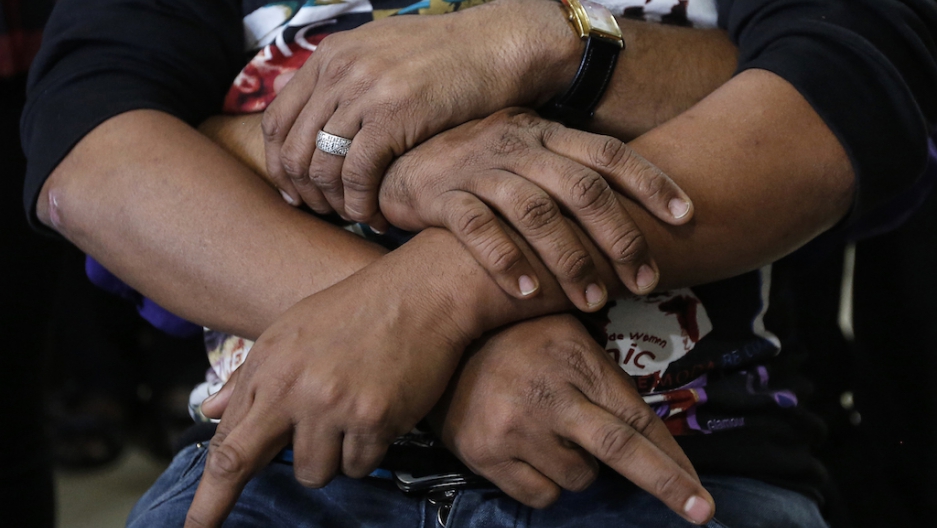 Gay rights activists in Mumbai, India, hold each other as they watch TV coverage of the Supreme Court's decision on a petition against the decision to recriminalize gay sex, Feb. 2, 2016.
Credit: Danish Siddiqui
Share

NEW DELHI, India — It took only five minutes, but India’s Supreme Court sent a ripple of hope through the LGBT community and its supporters this week by agreeing to reconsider their campaign to decriminalize homosexuality.

“We were so scared, none of us could sleep last night,” said Ramachandran, one of the activists present outside the Supreme Court building on Tuesday, the day that judges heard a petition against the top court’s 2013 decision to recriminalize gay sex four years after a lower court declared it legal. His sweatshirt read #HarmlessHugs, which he was handing out for free.

Like Ramachandran, many felt that this was a moment of reckoning. Long-time rights activists and other concerned citizens spoke about the heartbreak that the 2013 ruling brought.

That decision wiped out a victory that campaigners had fought years for: an order by the Delhi High Court in 2009 that Section 377 of the Indian Penal Code, which criminalizes “carnal intercourse against the order of nature,” was against India’s constitution. When the Supreme Court overruled that judgment, the long fight against Section 377 — a law from the colonial era — had to start all over again. First campaigners filed a petition asking the Supreme Court to review its decision. It was dismissed. So they resorted to their last legal hope: a special type of plea called a curative petition, intended to “cure” cases of grave injustice after all other appeals have failed. Only three such petitions have ever been admitted for a Supreme Court hearing since they were introduced in 2002.

The 377 petition has not been admitted yet, but on Tuesday — in just five minutes — the chief justice referred the decision to admit or dismiss it to a larger bench of five judges, calling it a “matter of constitutional importance” that needed further deliberation.

“The 2009 ruling was fundamental for human rights — either everyone is equal or no one is,” said Gautam Bhan, a petitioner in the case and a member of the campaign group Voices Against 377.

“There has been a gross miscarriage of justice [in 2013], and we ourselves asked for a larger bench to consider it. The court is acknowledging that these are important constitutional matters.”

As television crews flooded around the 20 or so supporters who had turned out for the decision, their optimism was evident. “The fact that it wasn’t thrown out makes us very hopeful — obviously the Supreme Court sees some merit,” said Anjali Gopalan, founder and director of the Naz Foundation, the NGO that filed the original suit against Section 377 back in 2001.

“I think it’s a tiny development. We cannot be subjugated by the religious right when it comes to human rights.”

India’s current government is dominated by right-wing Hindu movements, and campaigners have struggled to get the issue raised in parliament. In December, MPs voted against even discussing a private member’s bill to decriminalize gay sex.

Others at the courthouse on Tuesday spoke of an outpouring of public support since 2013, especially from young Indians who say they do not share the sentiment that “unnatural” sex is against Indian morals and a threat to the family unit.

“This is a matter of equality and rights, it is not just about sex,” said Vimal Bhai, an activist who has worked on a range of progressive issues with the National Alliance of People’s Movements. “If 377 is abolished, nobody is going to come out and force people to be gay. Decriminalization will actually save Indian families, because gay men and women will no longer be forced into unhappy marriages that harm the straight spouse, too.”

Those fighting the legal battle are convinced that India’s highest court will eventually agree with them.

“It has to happen, times are changing,” said Gopalan. “The 2009 judgment was ridiculous. It was beyond belief that they recriminalized homosexuality because they thought the LGBT community are a ‘minuscule minority.’”

A few rainbow flags on the Supreme Court’s lawns, a lot of support on social media and campaigners’ determination to pursue every appeal possible said otherwise.