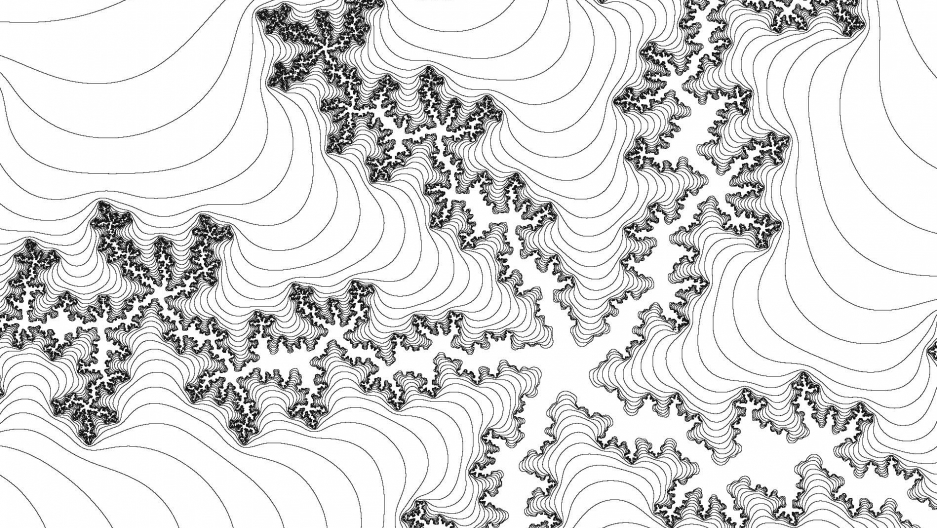 A detail of the Mandelbrot set, a fractal named after Benoit Mandelbrot, the French mathematician who investigated it in the 1970s. If you were to zoom in at any point on the intricate, wiggly line, the elaborate pattern would reappear infinitely.

If you’ve ever felt intimidated by math, or consider it a daunting labyrinth of numbers and equations in a textbook, open up Patterns of the Universe: A Coloring Adventure in Math and Beauty.

Flipping through this new coloring book is a mesmerizing journey. From perfect hexagonal tilings to luscious sine waves to nautilus shell spirals, every line illustration by mathematical artist Edmund Harriss (and a handful of others) brings a hypnotic sense of harmony.

“We think this is something that you can appreciate, knowing nothing about math,” says math writer Alex Bellos, who conceived the idea for the book and worked with Harriss to choose the designs. “To me, it’s like an encyclopedia of amazing mathematical images that can be enjoyed for their aesthetic appeal — but can also be enjoyed to learn stuff." 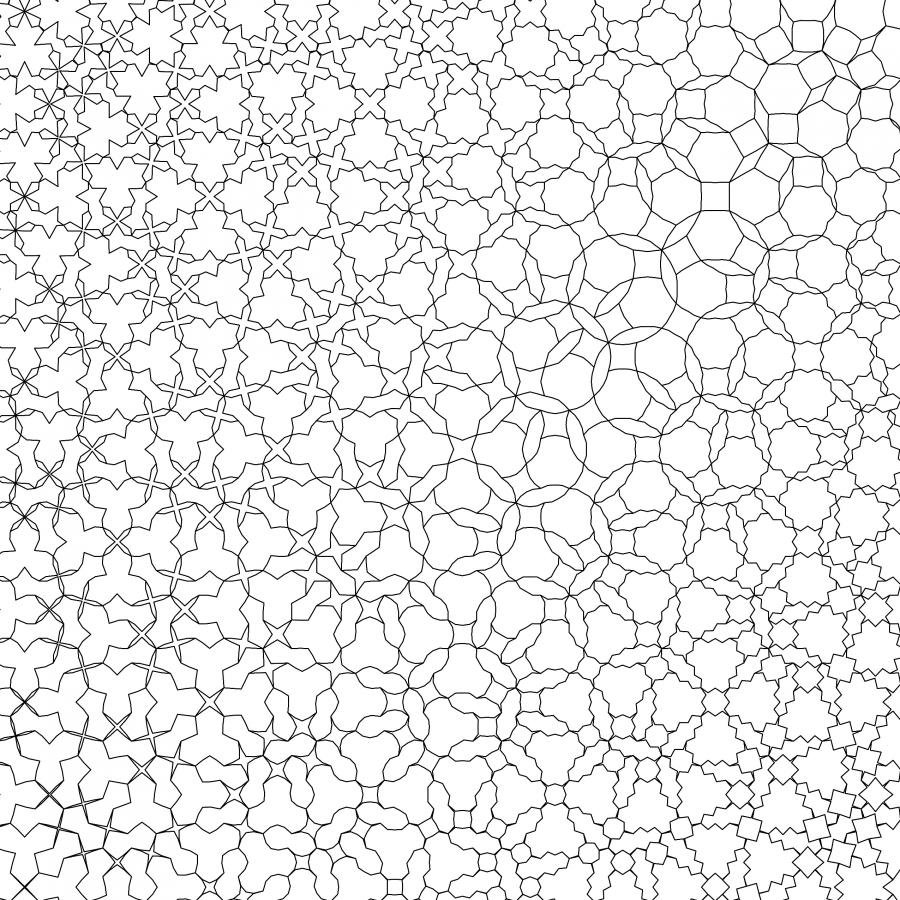 A deformation is a tiling in which the tiles slowly change while keeping the same underlying pattern. The earliest deformations, seen in the work of the Dutch mathematical artist M. C. Escher, morphed in a single dimension: from left to right, or from top to bottom. In this image, the deformation is two-dimensional. Edmund Harriss has created four different non-periodic tilings, one in each corner, that morph into each other from left to right and from top to bottom. Deformations are the nearest geometry gets to a “temporal” art form. You only get a feel for the pattern by following how the shapes shift across the page.

The drawings in the book are based on mathematical concepts, such as prime numbers, fractals and tessellations. Readers are encouraged to color as they please — “you should do it exactly as you want to do it; there are no rules,” encourages Bellos — though some drawings offer prompts based on the math at hand.

One page in the book, for example, instructs you to color by the numbers on a Sudoku grid. For another drawing, called “Coin Hex” in a section on randomness, you choose two colors, assign each to a side of a coin, and then flip the coin to determine which color you’ll shade in each of the hexagons in a full-page hexagonal grid. The resulting color scheme is in fact random. “Most people think that math is pattern, but it’s also the absence of pattern,” says Bellos. When it’s all colored in, this page is “rather beautiful,” he muses. 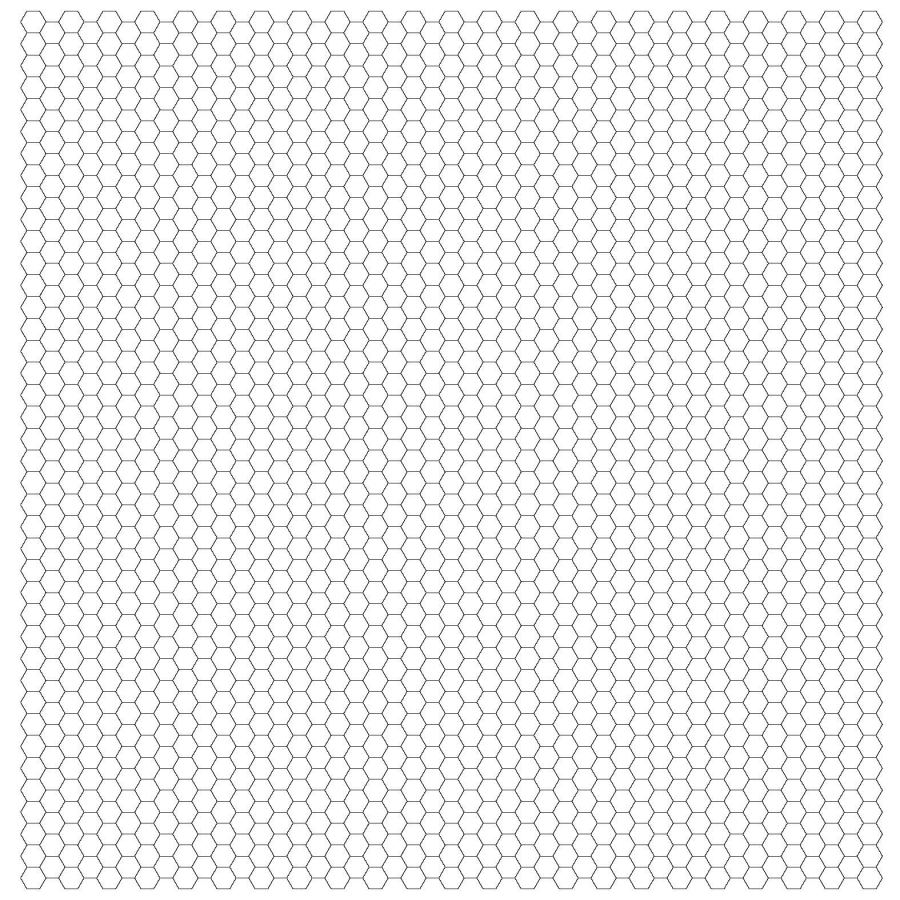 For each hexagon, toss a coin to determine the color. Choose one color for heads, one for tails. The point here is that you will have colored the hexagons totally randomly. But stare at it and you will see patterns. It’s a reminder that we find randomness very difficult to comprehend.

Bellos first came up with the concept for his book after noticing a friend had a famous mathematic image, the Ulam spiral, on a wall in his home. “And I thought, well, it actually works really well as art,” he says. “Art is supposed to provoke you, and to have this kind of deeper meaning.” Bellos was inspired.

He realized that exposing aesthetically pleasing mathematical images like the Ulam spiral might be a good way to communicate math to a broader audience. He had also noticed a recent boom in the popularity of coloring books for adults, which are often marketed as a way to relieve stress and anxiety. 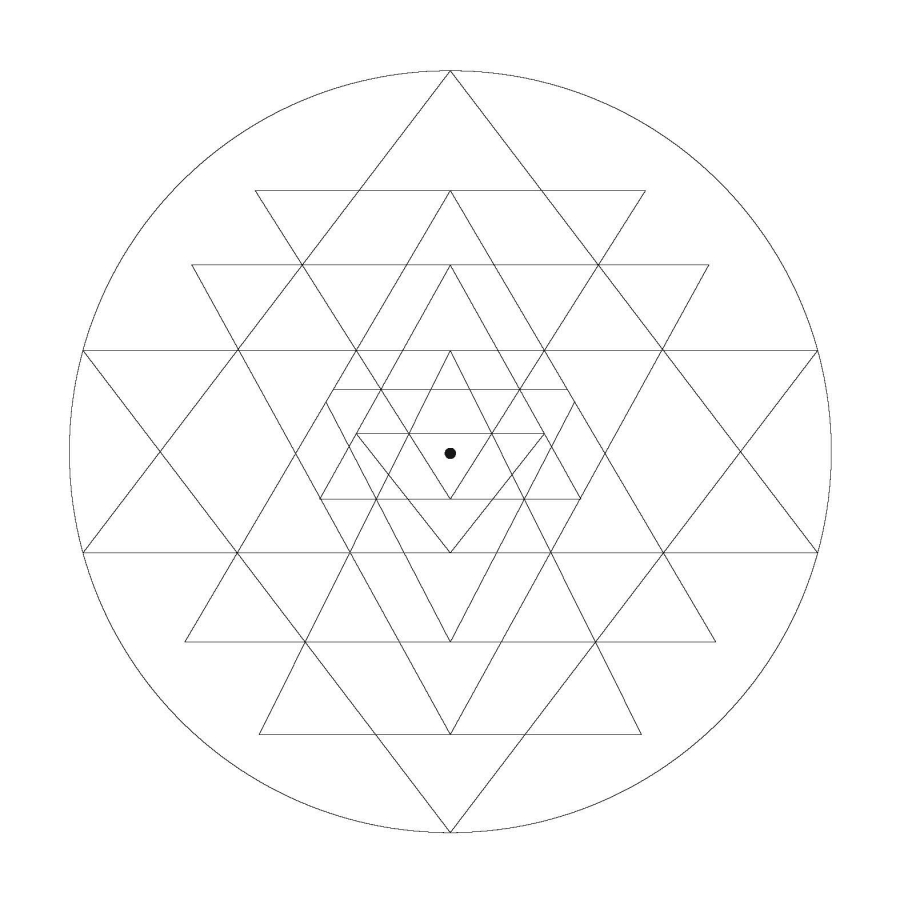 The best-known and most geometrically complex Hindu mandala: nine interlocking triangles with a dot, or bindu, in the middle. The Sri Yantra has many metaphysical interpretations and is used for meditation and worship.

And math itself could be considered a form of stress relief. Centuries ago, mathematical concepts were used in a lot of religious imagery to induce contemplation, says Bellos. For instance, the first drawing in Patterns of the Universe is a Sri Yantra, a Hindu symbol that’s long been used for meditation and worship, and which happens to be a basic geometric composition of nine interlocking triangles with a dot in the middle.

“You can look at all these images in this book, and you can contemplate them, you can meditate on them,” says Bellos. “It fits in really, really well with this whole idea of coloring as art therapy.”

Plus, you might gain some mathematical insight in the process. “It’s a bit wacky, and geeky,” Bellos says. “But it’s kind of cool.”

Teachers and educators can request a printable classroom packet via the book’s page here.

Images excerpted from Patterns of the Universe: A Coloring Adventure in Math and Beauty © Alex Bellos, 2015. Reprinted with permission from the publisher, The Experiment. Available wherever books are sold.