Leo Goldberger and his family came from Czechoslovakia, but they moved to Denmark before World War II. That decision was the reason they escaped the Holocaust.

In recent months, Denmark has earned a reputation for some of the strictest refugee policies in Europe.

Last week, Danish legislators passed a new law that slows down the resettlement process for refugee families. It also requires refugees to give up property to cover the costs of asylum.

Backlash against the new measure has been fierce — and some critics have even compared it to the Nazi seizure of Jewish assets before World War II.

For those familiar with Denmark's history, that's an ironic comparison. Denmark was the only Nazi-occupied country to rescue almost all of its Jews.

“The Danes were so angry at the Germans,” says Leo Goldberger, who grew up in Denmark before the war. “That was an easy way for them to rebel.”

More than 70 years ago, Goldberger was himself a refugee. His father was a Jewish religious leader in Copenhagen, and the beginning of the war put the whole family at risk. Danish Jews heard rumors that in other countries, like Poland, thousands of Jews were being imprisoned in huge camps.

One night, Goldberger woke up to a banging at the door. It was around 4 a.m. “The Germans came and tried to take my dad,” remembers Goldberger. “I was afraid that they would become angry enough to break down the door and shoot.”

After a terrifying moment, the neighbors intervened. They told the German soldiers that the Goldbergers were on vacation. The danger passed, at least temporarily. But then Danish Jews learned from their fellow Danes that the Germans were preparing for mass deportation.

“The Danes began to collect money,” Goldberger says. “They would even look in the phone book to see Jewish names. And they would come to your house and say, do you know what's happening? You've got to get out. We'll help you.”

When the warning came, Leo's family had an hour to pack whatever they could carry. They fled to the coast, where they waited in the rain for a signal. A light flashed in the darkness.

“I felt, suddenly, what I can only describe as an absolute rage. I kept thinking — what the hell did we do?”

“We walked right into the water,” says Goldberger. “Shoes and everything wet.” Almost 20 people piled into a cramped fishing boat.

These students attended the synagogue in Czechoslovakia where Leo Goldberger's father worked as a cantor. Of all these people, only three survived World War II — including Goldberger himself.

That experience still haunts Goldbeger. He and his family had to crouch under a piece of filthy canvas. When the boat was halfway across to Sweden, each passenger had to leap onto the deck of a Swedish boat. Somehow, they made it to safety.

After the war, Leo moved to Canada with his family. Today, he's a retired psychology professor living in Massachusetts. And that helps explain why he often tells his story in psychological terms.

“The smell of fish was absolutely noxious,” he remembers. “If you think in terms of what happens to human beings as they are reduced to the lowest level, you get to a point where things like smell become magnified. Because that's animalistic.” 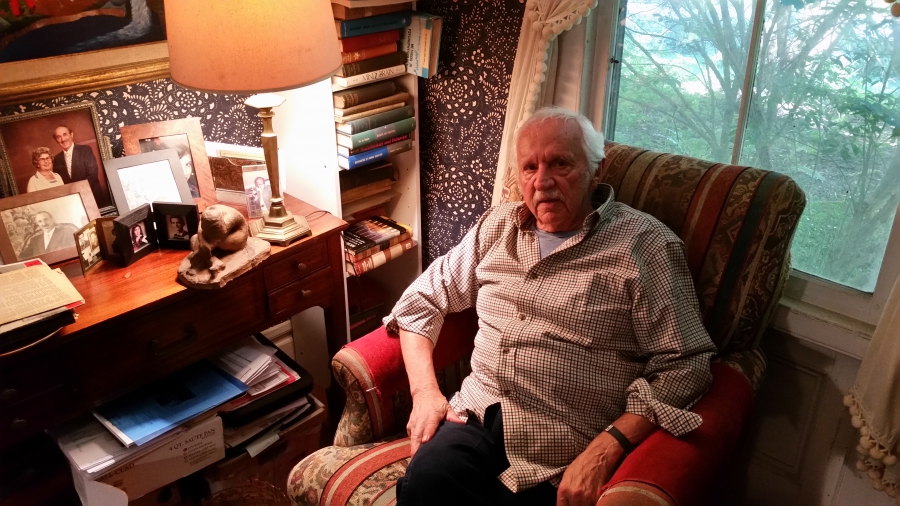 Goldberger says that psychology helped him make sense of his own experiences. “I was absolutely curious to find out what other people were thinking who didn't speak my language,” he says. “I was always interested in knowing what goes on inside your head!”

Adaptation was much more than a concept he heard about in class. Daily life was a process of adaptation. After all, English was his fifth language — behind Czech, German, Danish and Swedish.

“I remember my first date with a beautiful girl,” Goldberger says. “She kept saying to me, you're pulling my leg. And I kept saying, I'm nowhere near your legs! Idioms. Impossible.”

Goldberger became a researcher at Cornell Medical Center. “We were a group of interdisciplinary researchers studying adaptation to life in America — just like you might be interested in me and how I adapted,” he says.

Unfortunately, his supervisors had very different motivations. He found out years later: His research was secretly funded by the CIA. “I was lied to,” says Goldberger. His fellow scientists weren't interested in adaptation, like he was.

“They were only interested in finding out whether we could identify trustworthy potential spies,” he says angrily. “That's what the CIA was looking for.”

Years later, he still identifies with refugees. “When I look at the television, and I see a family trying to get on a piece of junk boat, my heart goes out. I have a tendency to cry,” he says. “It's a terrible, terrible feeling. Being on the run.”

When asked about Denmark's new refugee policies, Goldberger says he's disappointed. He says he can understand why Denmark wants to seize refugee property, because that's one way to cover the cost of resettlement. But he can't understand why refugee families should be kept out.

“I write to my Danish friends that they should be ashamed of themselves,” he says. “They're doing the absolute minimum.”

Goldberger knows that Denmark wasn't always this way — and he knows that not all Danes support their government's policies. He often thinks about the ordinary Danes who helped his own family. And he hopes that somehow, Denmark finds a way to live up to its history.

Update: A previous version of this story incorrectly suggested Goldberger was working at NYU at the time his research was funded by the CIA. At the time he was a researcher at Cornell Medical Center.