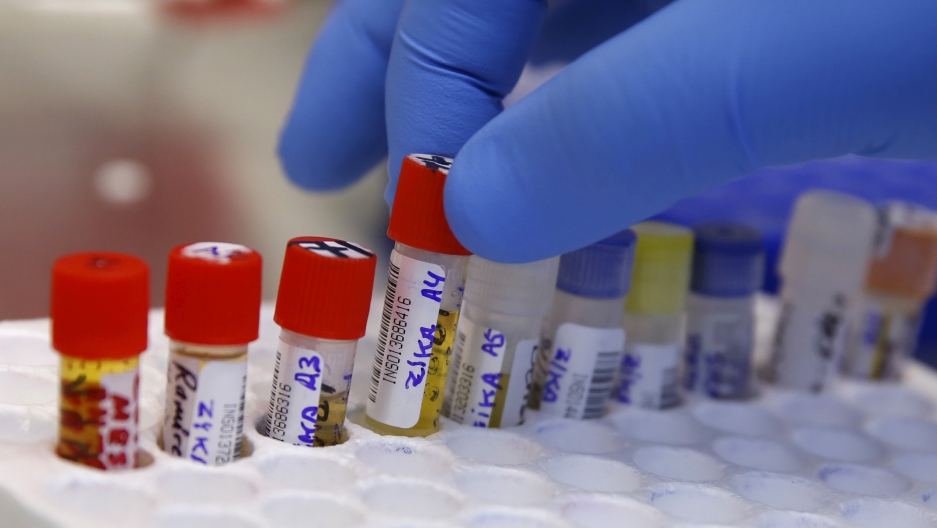 A health technician analyzes blood samples from patients bitten by mosquitoes at the National Institute of Health in Lima, Peru.

The alarm over Zika is spreading, with thousands of cases in central and South America, and a few in the US, mostly people who have recently been to a counttry where Zika is currently endemic.

But there seems to be at least one more way the virus is transmitted. We asked Jonathan Ball, a professor of molecular virology at Nottingham University how Zika infections are transmitted. This is what he told us.

Zika doesn't appear to be evolving into a virus that is primarily sexually transmitted.

"There's nothing to suggest that's going to happen. This is a virus which is primarily spread by mosquitoes, particularly the Aedes mosquito. Thousands, if not millions, of infections that we're seeing in central and southern Americas and parts of the Caribbean are purely down to mosquitoes biting an infected individual, carrying the virus, replicating it themselves in fact, and then passing it on to somebody else."

Zika is likely to continue to spread in the Americas primarily through mosquito bites.

"We've seen a virus that's been living for probably tens of thousands of years in Africa and in Asia. And it's been sort of embedded within the populations that live there. Those people are constantly exposed to the virus, and they get immune to it. Therefore they carry that immunity through life. And so you don't see these problems that we're seeing with Zika virus now, where it's essentially been introduced into a naïve population. They haven't got any existing immunity in southern America. They've never seen the virus before, and so it's easily spread from one person to another."

"We have global markets, we ship things from one end of the world to another, and we all like to jump on a plane and travel to far off tropical climes for holidays and things like that.  And so this is perfect for viruses and their spread."

People who travel to areas where Zika is prevalent must take precautions.

"The advice was for pregnant women to try and avoid travel to the worst affected areas.  The advice is still — don't go there. But of course if you have a partner who goes to one of those areas, they could potentially be coming back with that virus, and therefore there is a risk that they could then transmit that virus to you through sex. And that's why we've started to see advice where partners of pregnant women, if they have been to one of the affected areas, they're advised to not have unprotected sex. They're advised to wear a condom and that's for six weeks after their return. And if they've shown any symptoms, wear a condom for six months."