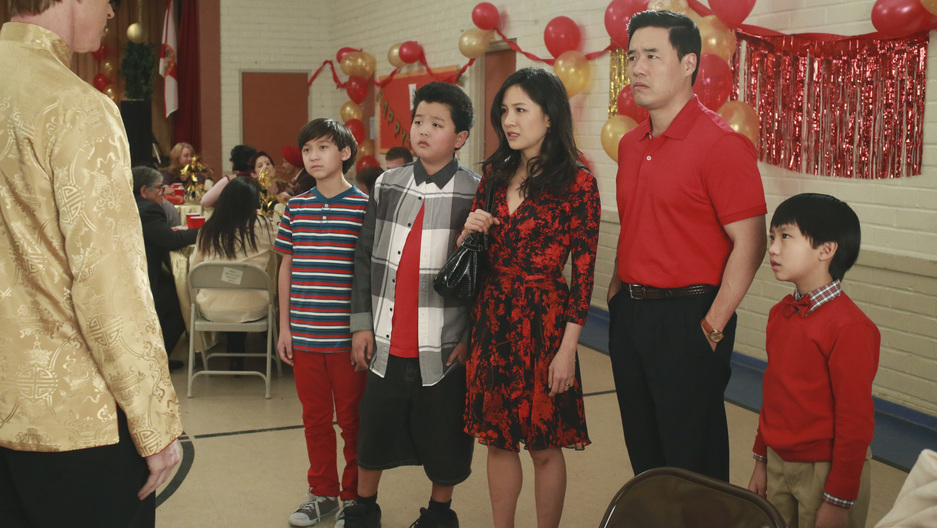 In the “Year of the Rat” episode of "Fresh Off the Boat," the Huangs stumble upon the Asian-American Association of Orlando, which is hosting a less than authentic interpretation of a Chinese New Year celebration. The episode will be a rare portrayal of the holiday on American television.

At a preview of “Fresh Off the Boat’s” Chinese New Year episode, the show’s creator, Nahnatchka Khan, was asked if this is the first time the holiday would be portrayed on American TV shows.

Khan thought about it. “Maybe. Like, [unless there was] a murder during Chinese New Year,” she joked. There have been odd mentions here and there, but tonight's episode (on ABC) certainly will be a milestone.

Though there have been movements to establish the new year as a national holiday — New York City added it to the public school calendar last year — it’s still rare to see it portrayed in Hollywood.

Which is surprising, considering there are more than 4 million Chinese, some 1.7 million Korean and 2.5 million Southeast Asian Americans in the US. And it’s a safe bet that many of them grew up hoping for generous cash gifts inside red envelopes every year during some version of the Lunar New Year.

Not to say the holiday has been completely ignored. There is that one joke in a 2001 episode of “The Simpsons,” where Chief Wiggum gives Homer a box of firecrackers he confiscated from some Chinese people whom he deemed suspicious because they claimed to be celebrating the new year in February. “Those guys and their crazy scams,” Homer says.

There are Chinese New Year mentions in movies like “Dim Sum: A Little Bit Of Heart” and “The Joy Luck Club,” both directed by Wayne Wang in the early '80s and '90s.

Like long division or diagramming sentences, it seems knowing about holidays that are celebrated by millions of Americans is important for children, but unnecessary once you’re an adult.

That’s why this episode of “Fresh Off the Boat” is especially welcomed by the cast and crew. It’s not just because the entire episode is dedicated to Chinese New Year, but because it explores what it’s like to be an Asian American living in the US, where the new year is a mix of tradition and improvisation.

“I go over to my cousin’s or grandmother’s house, and we have a big feast with fish and pass around hong bao [red envelopes],” says Hudson Yang, who plays 13-year-old Eddie on the ABC sitcom. “Though the sad thing about my family is that we usually just end up playing Wii Fit.”

Related: Chinese New Year should be a big deal for me. It's not, and I feel guilty

Sheng Wang, who wrote the episode, has spent the Lunar New Year with his Vietnamese American friends in New York, who gambled as part of their holiday festivities. And because no one had time to slave in the kitchen to make elaborate dishes for a large group of people, they would make a huge porridge for dinner and everyone would bring their own toppings.

“Porridge is actually a big no-no for New Year’s because it’s considered peasant food — and you’re not supposed to start off the new year eating poor people food,” he says. “There are a lot of traditions and lots of rules, but also ways of breaking the rules.”

For the fictional Huang family in “Fresh Off the Boat,” improvisation is crucial. In their new home in the suburbs of Orlando, their mostly Caucasian neighbors have never even heard of the holiday. But they make it work. It might not be so traditional, but it still feels like the Chinese New Year.

“How cool would it be if, the day after it aired, kids went up to each other in the playground and asked ‘Do you guys really do that?’” says Khan. “It’s just great to spread that narrative and open it up. And now, every year, we can add it to the canon, along with Halloween, Thanksgiving and Christmas.”

The Chinese New Year episode of “Fresh Off the Boat” is called “Year of the Rat.” It airs on ABC at 8 p.m. ET/PT on Tuesday. The first day of the Lunar New Year is Feb. 8. It’s the year of the monkey.