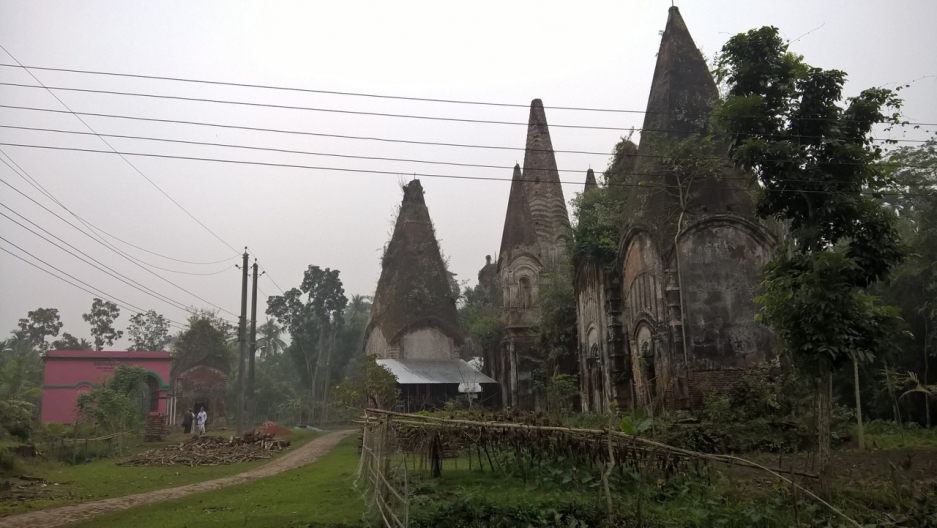 The Hindu temple at Pirojpur, where Sanjida and Puja attempted to marry.

When Sanjida left home to study, she met the person she wanted to spend the rest of her life with. The only problem — her partner was another woman, and same-sex marriage is not accepted in Bangladesh. Now, instead of finding happiness, she's facing criminal charges.

In January 2013, Sanjida, a 20-year-old Bengali Muslim woman, travelled from her village in southwestern Bangladesh to a small town, to continue her studies. Her father, a schoolteacher, had chosen to send her to college so she could help lift the family out of hardship.

The town of Pirojpur, where Sanjida moved to study Bengali literature, resounds with rickshaw bells, the Muslim call to prayer and Hindu temple hymns.

Sanjida heard of a room for rent in the family home of a Hindu potato seller, Krishnokanto. Impressed by Sanjida's studiousness and "good character," he asked her to help his youngest daughter, Puja, with her studies.

Though Krishnokanto's family liked her, they found her openness and the way she dressed in jeans and T-shirts a little odd for a young woman from such a traditional village.

In April 2013, during the Bengali New Year festival, Sanjida was in charge of taking a group of girls to the fair. When it was time to leave, she went into 16-year-old Puja's room.

"She was brushing her hair in front of a fan. She asked me to sit on the bed. Her back was turned toward me," Sanjida remembers.

"She was wearing an olive green blouse and petticoat. The back of the blouse had two strings that were hanging loose. At that instant, I fell in love with her."

To start with, Sanjida kept her feelings to herself. But later on that day something happened that convinced her Puja had similar feelings for her.

"She said to me, after we wandered around the fair, 'Can I have a picture taken standing next to you?' I said 'Yes.' She went to stand on my right. Then before I could think of anything, she just kissed me and asked a friend to take a photo," Sanjida says.

"It stirred up something inside me."

The young women knew their love would not be accepted in their conservative, provincial town, so they made plans to elope.

Three months later, in early July, they took a rickshaw to the town's 17th Century temple complex, surrounded by a lotus pond. There, standing before the moss-covered Shiva temple, the girls exchanged garlands of flowers and married, with the gods as their witnesses.

Sanjida marked the parting of Puja's hair with vermillion powder or shindur — the emblem of the married Hindu woman.

According to one of the priests at the temple, even such a simple wedding — if carried out between a heterosexual couple — would indeed have been valid, according to an old Hindu marriage tradition known as the Brahmo way.

In the full belief that they had been married before the gods, Sanjida and Puja headed for the Kocha river, and took the ferry to Barisal, where they hoped to hide from the wrath of their respective families.

They both knew that they had broken all cultural boundaries.

Puja's father was tipped off that the girls had been seen on the back of a motorbike, heading in the direction of Barisal. So, after searching the town, he went to the police and said: "Sir, my daughter has been abducted."

By the time the police had organized a search party, however, the girls had already crossed the river and arrived in Barisal. There they rented a room with a family.

"This is where we started our married life, and spent the most blissful week and a half together," Sanjida says.

The landlord of what Sanjida describes as their first "love house," an observant Muslim man, fondly remembers his young tenants.

"(The relationship) is not in our religion and is not acceptable. But personally I thought it was great love. I'd never heard of anything like this before, but when I saw two women so much in love I had to accept it."

But Puja's family would not accept it. For them the love story was a lie.

"She was given tea, there was something in it that made her unconscious," insists Puja's sister, Shipra.

Hearing that the authorities were looking for them, the fugitives set off again, this time for the capital, Dhaka, where they found a room in a block of flats in the north of the city.

In late July 2013, about three weeks after they had left Pirojpur, Bangladesh's elite police force, the Rapid Action Battalion or RAB, arrived at their door. They arrested Sanjida and swiftly transferred her to Pirojpur's local police station. Puja was returned to her family.

"Because there is no precedent of such a case of two women — let alone from Hindu-Muslim background — running away together and claiming that they have married, the police and even Sanjida's lawyers didn't know at first how to deal with it," says Farida Begum, director of the Bondhu Social Welfare Society, an umbrella body for Bangladesh's LGBT groups.

If they had been men, they could have been tried under Section 377, a colonial rule dating back to 1850, which criminalises "carnal intercourse against the order of nature".

However, this does not apply to women, so instead Sanjida was charged with the abduction of a minor, an offence with a lengthy prison sentence.

Had Sanjida been a man, the couple would have been considered married, and the fact that Puja was 16 would not have mattered — in Bangladesh, two out of five girls will be married before the legal age of 18, according to the UN.

Sanjida too had been married off to a much older man before she finished high school, but was able to divorce him before the time came to go and live with him. Perhaps, that contributed to her decision to rebel against her family and her culture and come out so publicly.

For two-and-a-half months she was held in a cell, before being released on bail.

Of all the harsh treatment she experienced in prison, the most humiliating was an intimate inspection.

"Female police officers were sent to check if I was a woman or a man," she says. "The officer just started touching me everywhere.

"That was the most shameful moment in my life, so shameful that I wanted to commit suicide. Three times they did the same thing. Everyone was mocking me. Some inmates were saying, your face is so innocent, why is your mind so ugly?"

But the Bangladeshi media felt more sympathy with the young women, reporting their adventure as a daring and romantic love story.

Puja gave journalists a statement: "If a boy can love a girl, why can't a girl love another girl? Why can't a woman marry a woman if they are in love?" She explained that she and Sanjida went to Dhaka to set up home together.

Her family, though, denies Puja ever said this.

Sanjida took me to the remote village on the edge of the Bengal delta, where she grew up and where her conservative Muslim relatives still live.

The home has no electricity or running water. Her mother, sitting on the floor and chewing pan, a betel leaf mix, said that her youngest daughter was different from her other three children.

"She was sick when she was younger — a djinn [spirit] lived with her. We took her to lots of religious men for treatment. They gave her amulets to wear with prayer parchments inside."

Her father's silhouetted shape came into focus across the hyacinth pond as he returned home from the school where he teaches.

All he said was that by not finishing her degree, Sanjida had let him down. He refused to talk about his daughter's sexuality.

Other members of the family, though, were more candid.

"She said that she loved another woman — tell me, what can two women do in bed?" asked her first cousin, a young hafez who has memorized the Koran.

Her uncle, a former soldier, said: "There's no djinn or anything, she has a man problem — hormone issues, that's what this is about."

At this point, Sanjida snapped and shouted at her uncle, ignoring her father's imposing presence.

"I am not a man, nor will I ever be. I am 100 percent a woman. If my country ever legalizes same-sex marriage, I'll be the first one to come forward."

This is a 23-year-old Bangladeshi woman from the back of beyond, openly proclaiming a sexual orientation that defies all traditional norms.

Bangladesh was once a more tolerant place than it is today, before a puritanical form of Islam spread across the country, followed by fatwa-inspired violence and the mindless killings of bloggers. In rural parts of the country, there was a kind of "live and let live" philosophy. This was the Bangladesh Sanjida's and Puja's ancestors would have known, and which, perhaps, is still reflected in her younger brother, Baizid.

Although he says it was hard to accept his sister's sexuality at first, now "I have come to terms with it, so has our mother ... even our father is OK with it — his love for his child is stronger than his conservative views.

"I have never seen a case like hers before, but have now read on the internet that there are others like her and not just in Bangladesh."

In December, thousands of people took part in the World Human Rights Day rally, in the capital, Dhaka. Among them were many gender rights and gay rights activists who see Sanjida as a hero. They want equal rights for sexual minorities and a change to Section 377.

Who would have thought a young woman would inspire so many with her honesty and her extraordinary courage? Sanjida is Bangladesh's natural-born pioneer of gay rights.

"I didn't know that what I felt was called being a lesbian," she says. "I had not heard the word until gay rights groups helped me in prison."

All of Sanjida's attempts to contact Puja were sabotaged by Puja's family. The last flicker of hope vanished when Sanjida heard that Puja had been married off to a policeman from her community.

So that love story ended in failure, but Sanjida has fallen in love again with another young woman, Arifa. And she continues her journey with resilience and single-mindedness, finishing her degree while working for a human rights organization — and waiting, one day, for her trial to end.

This story was cross-posted with our partners at BBC Magazine. See the entire documentary.