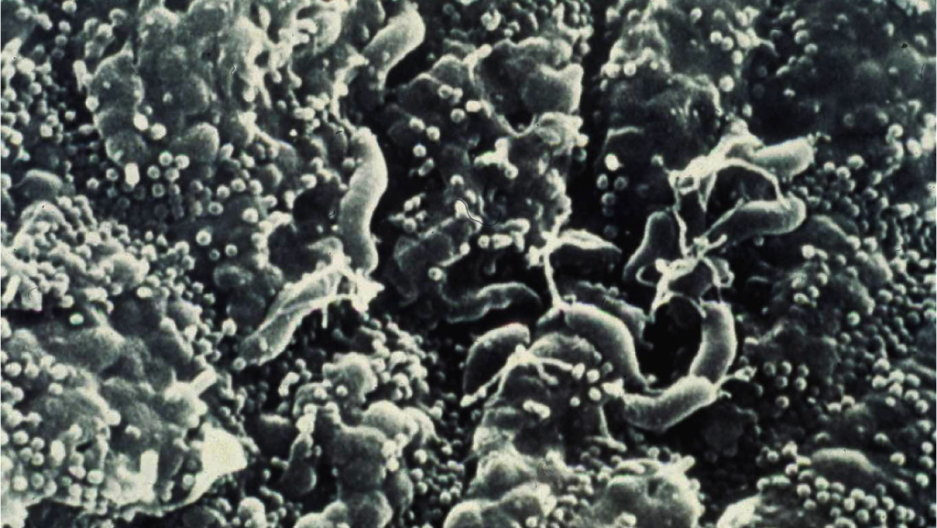 A few weeks ago, researchers announced that a 5,300-year-old mummy — the Iceman dubbed Ötzi — contained a strain of a bacterium called Helicobacter pylori.

Researchers have long suspected that the bacterium existed in ancient humans, and this finding serves as further evidence. It also supports the idea that H. pylori inhabited humans when our species first evolved 200,000 years ago, according to Martin Blaser, director of the Human Microbiome Program at New York University’s Langone Medical Center.

You may know this microbe as a culprit behind stomach ulcers and stomach cancer. When H. pylori is present in the human stomach, it’s usually the most dominant bacterium there — but there aren’t necessarily “symptoms” or signs of its existence in your everyday life.

These days, however, H. pylori is losing its foothold. “There’s a lot of evidence that Helicobacter pylori is disappearing from people’s stomachs,” says Blaser, who’s been studying the microbe for more than 30 years. And there’s some debate over whethe we should be concerned about its decline.

Blaser explains H. pylori’s history, what effects its disappearance could have on our health, and why there’s controversy surrounding its presence in our microbiome.

How long have we known about Helicobacter pylori?
Helicobacter pylori was discovered twice. It was discovered in the 19th century by German pathologists, who saw it in the stomach [although, they didn’t know at the time what organism it was. We now know that what they saw was probably H. pylori.]. It was present in everybody’s stomach — it hadn’t yet disappeared. They couldn’t grow it in culture, however, so doctors and scientists ignored it and ultimately forgot about it.

Then in the 1970s, a pathologist in Australia named Robin Warren and his associate, a physician named Barry Marshall, re-examined this, and they saw the organism again. But at this point, approximately only-half the people had it. They put together the idea that every person who had peptic ulcer disease had this organism and that it was, by and large, necessary for ulcers to form. Then they showed that if you treated people who had ulcers with antibiotics and got rid of the organisms, their ulcers would heal and stay away. This transformed medicine; it changed the treatment of ulcer disease, and in fact, they won the Nobel Prize [in Physiology or Medicine] in 2005 for that discovery.

What is H. pylori doing in our stomachs when we have an ulcer?
That’s a very simple and good question, but the answer is not quite simple. We don’t fully know the answer. One of the ideas is that it’s causing an inflammatory state, and that’s changing the regulation of the hormones that control gastric acidity. It could be that the inflammation is like a weakening in the wall. Imagine there’s a wall, and it’s just getting eroded and weakened. That’s what an ulcer is.

What is H. pylori doing when it isn’t causing an ulcer or cancer?
In most cases, there are no symptoms. It’s part of the normal flora, it’s part of our normal microbiome, just like many other organisms.

But now you say the bacterium is disappearing from our stomachs. What’s the cause?
When you look at each group of people born in subsequent generations, or subsequent decades, the rates at which they have Helicobacter pylori are less and less. We have shown that for people born early in the 20th century, we could find the organism in more than 70 percent of them, whereas we saw it in less than 6 percent of children born in the 1990s. That’s a huge, huge decrease. And this is happening all over the world, at different rates. This is one of the things that I’ve been most interested in, because this is a fundamental member of the human microbiome, but it’s been disappearing.

There are a couple things causing it. The first thing, which is rather simple, is that many children get Helicobacter pylori from their mothers. So if their mother doesn’t have it, they’re not going to have it. Second, we think that factors like clean water and sanitation have limited the transmission of Helicobacter pylori. Antibacterials in foods that we eat limit it. And of course, 70 years of the general use of antibiotics have led to a decline.

Do antibiotics eradicate H. pylori from our stomachs completely and forever?
They may. There’s evidence that about 20 percent of people who have Helicobacter pylori lose it with one course of amoxicillin, which is a very widely used antibiotic, probably the most widely used in the world. So if a girl has Helicobacter pylori and she takes amoxicillin, by the time she’s going to be a mother, she might have lost the bacterium.

Your research suggests that maybe we shouldn’t want to get rid of H. pylori completely in all people.
One of the questions is, when you lose an organism that’s been present for so many untold thousands of years, and seemed relatively harmless in most people, could there be any consequences of the loss of the organism? We and others began to find that there were.

First I’ll talk about diseases of the esophagus: esophageal reflux, or GERD, as it’s called; the premalignant process called Barrett’s esophagus; and there’s a special cancer called adenocarcinoma of the esophagus. All of these diseases had been rising dramatically over the course of the 20th century, into the 21st century. We and others have put together many studies showing that there is a relationship — that Helicobacter pylori living in the stomach in some way appears to be protective of the esophagus, the neighboring organ.

We continued that work looking at another disease that was rising, which is asthma. We and others have found lots of evidence that Helicobacter pylori is protective against asthma, that this organism is training the immune system in ways that dampen our response to allergens. Studies in mice have also shown that if you give Helicobacter pylori to young mice, you can protect them against asthma.

We discovered the costs first — ulcers and cancers. And now we’re [the medical community] discovering the benefit of Helicobacter pylori.

Not everyone agrees that H. pylori can be beneficial, though.
There are critics who say it’s definitely a pathogen, we should just get rid of it, and all this other stuff is not sufficiently supported — and even if it were true, it’s not that important. And I disagree.

What is your ideal solution?
So right now, the medical community has a one-size-fits-all philosophy: Get rid of Helicobacter pylori. But I think the doctors of the future are going to be much more nuanced about H. pylori, and we will have a much greater bank of information that says in this person, we need to get rid of it because they’re prone to get ulcers or cancer; and in this person, we can just leave it alone because it’s not going to do anything; and in this person who doesn’t have it, we need to give it to them because they’re at risk for asthma or esophageal diseases. So that’s where I think it’s going to go, 10-20 years from now. [Blaser expounded on this idea in 1998 in the British Medical Journal.]