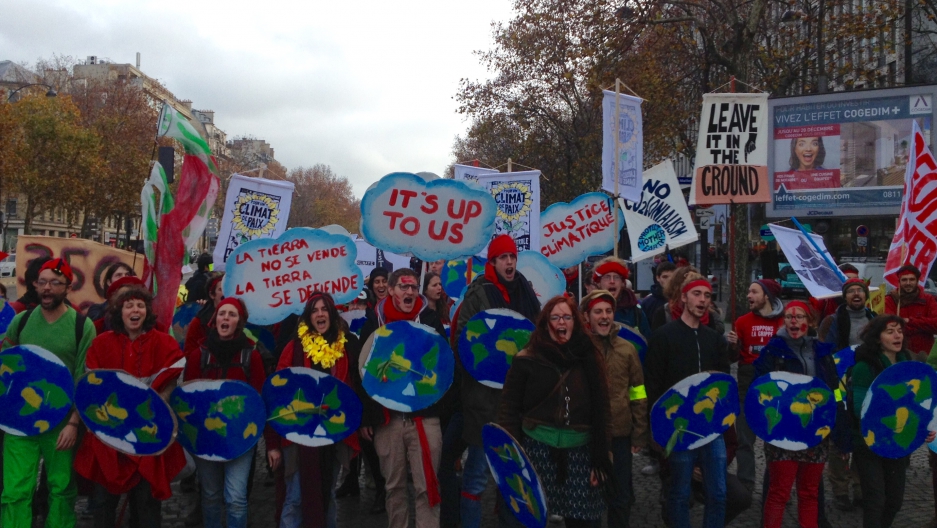 Activists demonstrate in Paris during the UN climate change summit in December.

Every Monday evening for more than a year, demonstrators have stood in protest at an intersection in Boston’s West Roxbury neighborhood. Holding signs and singing protest songs at the cars passing by, they’ve stood in rain, sleet and snow to oppose a planned new natural gas pipeline near their homes.

The new pipeline would bring more natural gas to Boston from Pennsylvania and points west.

Neighbor and protestor Nancy Wilson’s initial concern with the project was about safety, but as she got more and more involved with the grassroots groups formed to oppose the pipeline, she has thought more about the impact of projects like this beyond her backyard.

“Everyone knows that we have to end our dependence on fossil fuels, everyone knows this, and this commitment to the build-out of infrastructure that we don’t need and we don’t want flies in the face of logic at a critical inflection point for our climate future and our state’s future,” Wilson said.

Nearly 200 countries pledged to limit carbon emissions in the Paris agreement, but the text doesn’t specify how they have to do it.  And once the agreement is officially adopted, it doesn’t kick in until 2020. Wilson and others worry that building new fossil fuel projects before then could lock the country into a future of dirty energy. As a result, projects like new pipelines are increasingly seen as major front lines of the climate movement, both in Massachusetts and around the world.

Protesting against these new projects are just one way activists who have returned home from the UN summit in Paris are trying to keep the momentum toward a greener future going at home.

Chuck Collins, one of the Boston protest’s organizers, draws inspiration from a sense of collective mission.

“I kind of feel like we’re part of ‘Blockadia,’ a global movement trying to stop fossil fuel infrastructure, whether it’s First Nations groups in Canada, or people in India, or here in West Roxbury, we’re like part of a global citizens movement,” Collins said.

“I think that activists are looking at ways that we can fight locally but connect globally,” said Jamie Henn, with the climate action group 350.org.

Henn said bolstering local protests is at the core of 350.org’s post-Paris strategy. They’re planning a week of coordinated global protests this spring.

“People in different countries will be taking on the worst fossil fuel projects where they are, so in Australia people standing up to a major coal mine, in Canada people taking on the tar sands, etcetera,” Henn said. “I think people realize that there’s strength in connecting internationally, but that the real work has to be done at the local level.”

Engaging in decision-making closer to home

Fighting to shift the balance away from fossil fuels isn’t the only battle line for activists after the UN summit. They aren’t just protesting, but pushing for a seat at the table where leaders will decide how they will achieve the goals laid out in Paris.

“From 2009 til last year in Paris, the focus was more of trying to get the world into an agreement,” said Krishneil Narayan, coordinator of the Pacific Islands Climate Action Network.

“Now, what comes after Paris is that the NGOs and civil societies will continue to hold their governments accountable to implement this agreement,” Narayan said, “at our own particular regions, our national level, and more specifically at the grassroot level.”

A priority for Narayan is making sure island nations get their fair share of the billions of dollars pledged by developed countries to help poor and vulnerable ones adapt to higher temperatures and rising seas.

“Trying to streamline the funding mechanisms that come through the Green Climate Fund and ensuring that the Pacific has access to that funding is going to be a priority for us,” Narayan said.

Meanwhile, for some activists in Brazil, the focus today is on engaging with local governments. Debora Leao co-founded a group called Engajamundo to give young people a voice in global forums like the Paris conference. Now the group is looking for ways to speak up closer to home.

“What we are looking toward is how to get young people involved and engaged in local governments decisions and strategies toward adaptation, toward bringing renewable energy into their energy matrix, and all those things that will need to be implemented locally in the future,” Leao said.

The Paris agreement gives the world a landmark target: keep global warming well under 2 degrees Celsius. Now it is up to individual countries to meet those goals, and many activists see it as their mandate to make sure they do.