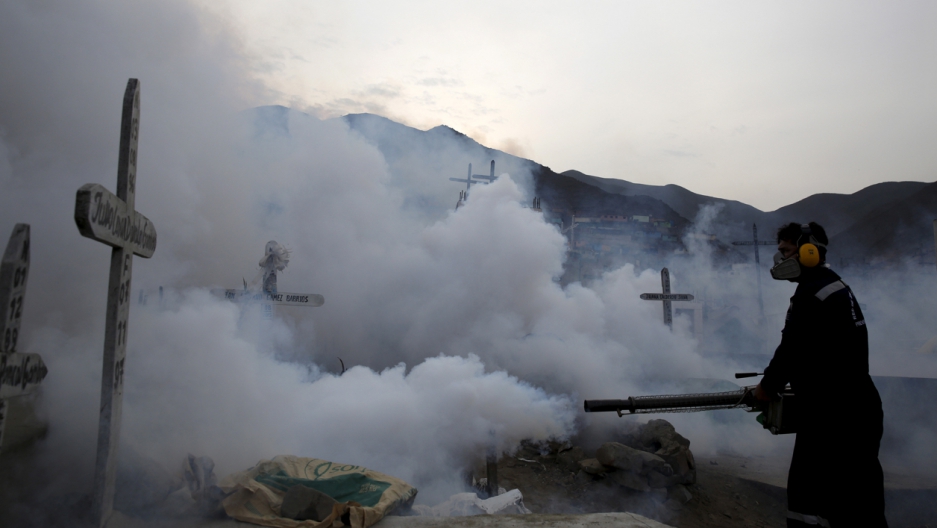 A health worker carries out fumigation as part of preventive measures against the Zika virus and other mosquito-borne diseases at the cemetery of Carabayllo on the outskirts of Lima, Peru on February 1, 2016.
Credit: Mariana Bazo
Share

The World Health Organization on Monday declared that a surge in serious birth defects in South America was "strongly suspected" of being caused by the Zika virus and constituted an international health emergency.

"We need to take action," WHO chief Margaret Chan told reporters in Geneva.

The UN health body said that a surge in cases of microcephaly — a devastating condition in which a baby is born with an abnormally small head and brain — was likely caused by the mosquito-borne Zika virus and declared the situation a "public health emergency of international concern."

Chan said a meeting of global health experts who make up the agency's emergency committee had agreed "a causal relationship between the Zika infection during pregnancy and microcephaly is strongly suspected, though not scientifically proven."

"All agree on the urgent need to coordinate international efforts to investigate and understand this relationship better," she said.

"The experts also consider patterns of recent spread and the broad geographical distribution of the mosquito species that can transmit the virus, the lack of vaccines and rapid and reliable diagnostic tests and the absence of population immunity in newly affected countries were ... further causes for concern," Chan said.

"The clusters of microcephaly and other neurological complications constitute an extraordinary event and a public health threat to other parts of the world," she said.

WHO warned last week that the mosquito-borne virus was "spreading explosively" in the Americas, and said the region could see up to four million Zika cases this year alone.

The WHO is under pressure to act quickly in the fight against Zika, after admitting it was slow to respond to the recent Ebola outbreak that ravaged parts of west Africa.

In addition to microcephaly, Zika is also believed to be linked to a neurological disorder called Guillain-Barre syndrome.

The virus is transmitted by the Aedes aegypti mosquito, which also spreads dengue fever and the chikungunya virus. It produces flu-like symptoms including a low-grade fever, headaches, joint pain and rashes.

WHO has so far refrained from issuing travel warnings related to Zika, stressing that the most effective form of prevention is getting rid of stagnant water where mosquitos easily breed, and using personal protection against mosquito bites such as using repellant and sleeping under mosquito nets.