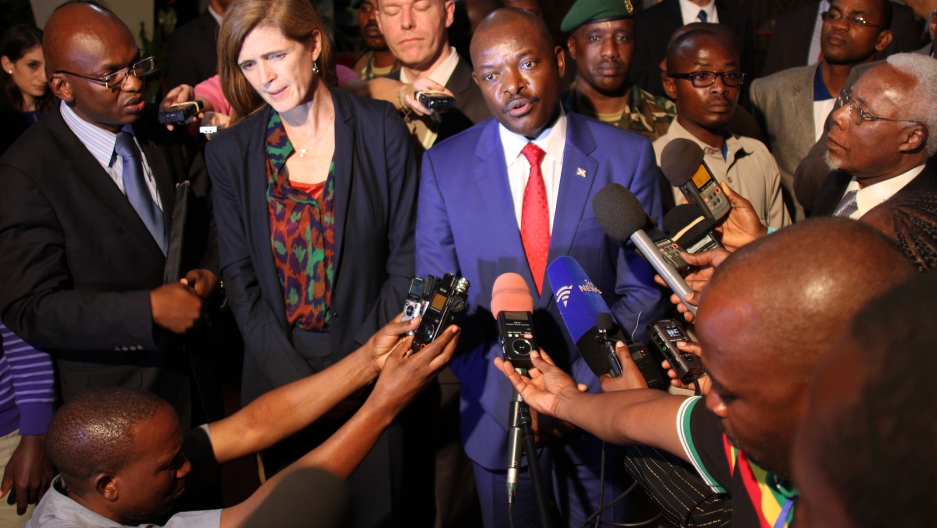 US Ambassador to the United Nations, Samantha Power, and Burundian President Pierre Nkurunziza speak to the press in Gitega, Burundi.

Despite the dogged efforts of the world’s top diplomats, Burundi is sliding into an abyss.

Many warn it’s reminiscent of the early days of the holocaust that engulfed neighboring Rwanda in 1994.

“A match could be laid down, lighting up whole communities that have so far stayed peaceful," US Ambassador to the UN, Samantha Power says. “Right now we are in a world of trying to prevent a small fire from becoming a large one,” she adds.

Power blames a Burundian president “in denial,” and an opposition aided by Rwanda that has “radicalized over time.”

Her fears are bolstered by reports over the weekend, that the African Union has abandoned plans to send peacekeepers to Burundi. That’s on the heels of satellite imagery released on Friday, showing what appear to be mass graves on the outskirts of the capital, Bujumbura.

Burundi’s most recent troubles began in April, when its President Pierre Nkurunziza insisted on running for a third term, ignoring a constitution that barred him from doing so.

The clashes that followed have taken hundreds of lives, and displaced hundreds of thousands.

The UN Security Council has been trying to get out in front of the problem. Council members, including Power, touched down in Burundi in mid-January, the group’s second visit to the tiny central African nation in 10 months.

“The Security Council almost never travels twice to the same country in a single year,” she says. “This is the first time that has happened in more than 20 years.”

Power describes Burundi’s president as "cloistered in a bubble where anybody who challenges him or tells him that things are going badly in his country have basically been kicked out of the inner circle.”

She says UN Security Council members “tried to puncture the bubble, but his imperviousness to our message was quite clear.”

Power also blames neighboring Rwanda and lends credence to allegations that its government is training and supporting opponents of Burundi’s regime.

“We believe that the reports of Rwandan involvement are credible, and we have exerted public and private pressure on Rwanda to do nothing to further destabilize the situation,” she says, adding that parts of the opposition “have grown violent.”

The past 10 months have been deadly for civil society in Burundi.

During her January visit, Power hoped to check back in with activists she’d met on her 2014 trip. She found most had fled the country or were too frightened to meet with her. One, human rights campaigner Pierre Claver Mbonimpa, had been shot.

“It’s not just what civil society said or didn't say to the Security Council when we visited, but what is left of civil society and did they even feel free to come forward and engage?” she asks. “The answer is, by and large, not.”

Burundian poet Ketty Nivyabandi is one of many activists who’ve fled since violence escalated this spring. Nivyabandi says Burundian authorities targeted her after she led all-women demonstrations in the capital in May, denouncing Nkurunziza’s decision to stay in power for a third term.

“It was a clear choice,” Nivyabandi says of her decision to seek exile in Calgary, Canada. “If i didn’t have children, I certainly, certainly would not have left. But I would also, in most likelihood, be dead by now.”

The US State Department has ordered the evacuation of all non-emergency government personnel from Burundi. Ambassador Power had her own brush with Burundi’s government when she tried to talk with reporters at Bujumbura's airport at the end of her trip. Officials tried to push her away from the journalists.

You can see Power in the YouTube video scolding a Burundian official, saying "Don't touch me, I'm talking to the press. I can do what I want.”

"We held a press conference, but I think we also got a window into some of the darker tendencies that exist in that country and with the government right now,” she warns.