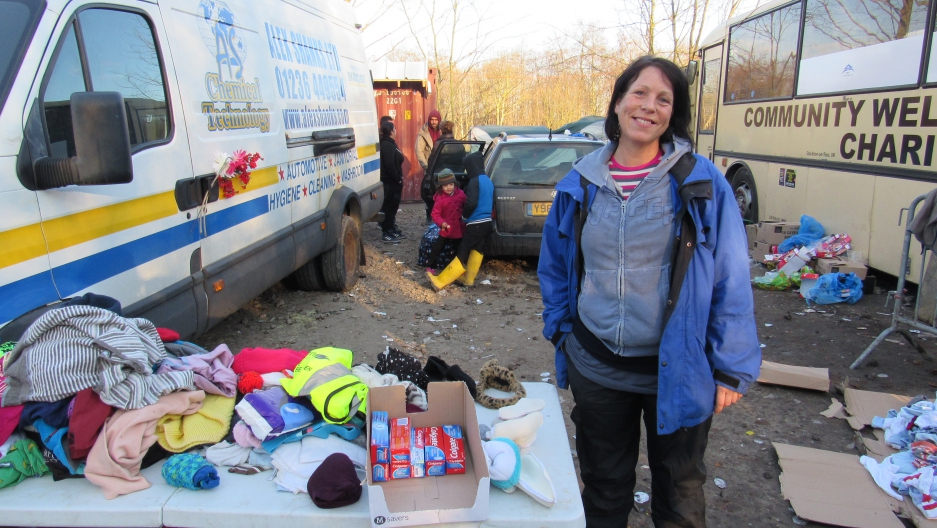 British volunteer Tally Oliver took a leave from her job in the UK and loaded her car with provisions to help migrant families in the camp at Grande-Synthe. "It's a humanitarian crisis that we all have to take responsibility for."

The northern French town of Grande-Synthe is home to what used to be a small camp for adult migrants hoping to make their way to the UK. But recently, the camp swelled from a few dozen people to a population of about 2,500, some of them children. It’s become a humanitarian crisis for Grande-Synthe, population 21,000, and local volunteers have stepped up to fill the vacuum.

One local group, Salam provides hundreds of meals a week for the camp, with an all-volunteer camp workforce — including social workers-in-training, teenage interns and quite a few retirees, like Henri Kupczyk.

Kupczyk says he’s fascinated by all the far-away countries he’s gotten close to through his work at the camp at Grande-Synthe.

“You cover France,” he says to me, “but we are practically five days a week in Kurdistan, in Iraq, in Syria ... we travel a lot. And there was a time when we were in Vietnam too. Every Monday we encounter a new country.”

But Kupczyk misses the days before last summer, when the camp was home to just a few dozen people at a time.

“We used to know those people well. It’s funny, we even made friends there, but now it’s impossible. In three months’ time, their number went up to [2,500], so relationships are more difficult,” he says.

As masses of people began to arrive in Grande-Synthe last summer, Françoise Lavoisier, Salam’s coordinator, says things began to get out of hand.

“When they were only about 100 people, it was a lot more manageable,” she says. “For example, you could just tell a couple of guys, ‘Look you need to clean up. Did you see how dirty this place is? You can’t live like this!’ And you’d give them garbage bags and it would be taken care of. But now it’s a whole different set-up.”

She adds, “They say the camp is about a tenth the size of the city of Grande-Synthe, so it is a village within the town.”

When international NGOs, like Doctors without Borders, came to help last fall, Lavoisier was relieved — at first. Then individual volunteers began to show up too. Tally Oliver took a leave of absence from her job in Britain to lend a hand.

“I got all my friends to give me money, clothes, food, and put it all in my car and drove here to meet somebody I have never met before. I decided to help because I think it’s a humanitarian crisis that we all have to take responsibility for,” Oliver says, “and I could no longer sit back and watch it.”

Oliver, who’s been distributing toiletries and hundreds of water bottles, is also working with another British volunteer who runs a mobile kitchen at the camp.

While they’re providing a real service, Françoise Lavoisier says because no one’s managing all these volunteers, it’s become “total anarchy.”

“Everyone comes and goes and brings stuff without consulting others,” Lavoisier says. “[Volunteers] all think that before they arrived in September — when they saw the photo of that Syrian little boy dead [Aylan Kurdi] on a beach — that there was no help on site. So they all take this position of ‘world savior.’ I may be saying something a bit cruel, but it’s true.”

All the chaos leads to a lot of waste, she adds.

“We see it every day in food, clothes, blankets, everything,” she says. “Since volunteers keep bringing stuff, good items that have been used a couple of times get discarded. There is no way to wash or dry anything in the bad weather, so wet blankets just get thrown out.”

But there are darker issues at the camp that preoccupy Lavoisier these days. It’s the suspicion that human smugglers live on site among the migrants, charging them for services the city provides for free — for instance, making them pay for taking a shower. The town’s mayor has said he wants to root out the smuggler gangs. But Lavoisier says it’s almost impossible to know who they are because the migrants keep quiet about them.

“We see and hear things,” she says, “but we don’t have proof. It’s just something we sense.”

A week ago, gunfire erupted at the camp between suspected smugglers; four people were injured and two were arrested. Despite incidents like this, most people in Grande-Synthe have been tolerant, even welcoming of the migrants. But that doesn’t mean everyone feels good about the camp’s presence. Residents near the camp complain about litter and some women say they are afraid to go out on their own.

For the volunteers, like Maryse Facon, though, it’s the misery of the camp residents that haunts them.

“For three weeks, I was unable to come to the camp because I was too distraught; I had nightmares,” Facon says. “I even thought of stopping this work. I told myself I wasn’t meant to do humanitarian work. Then I conquered this fear. You have to know how to shut the door, and when you get home, you need to forget. It’s not always easy, but you have to do it. If everyone gives up, these people will have no one left.”

For another volunteer, Teresina Fassella, though, working with the migrants has been a life-changing experience. She began volunteering with Salam two weeks after her husband’s death.

“The very mention of the word migrants used to scare me, and I passed that fear onto my children and my friends. I used to stay awake at night. But I got over it and I am very happy about.”

And even though the work can be overwhelming, the Salam volunteers of Grande-Synthe plan to keep at it.