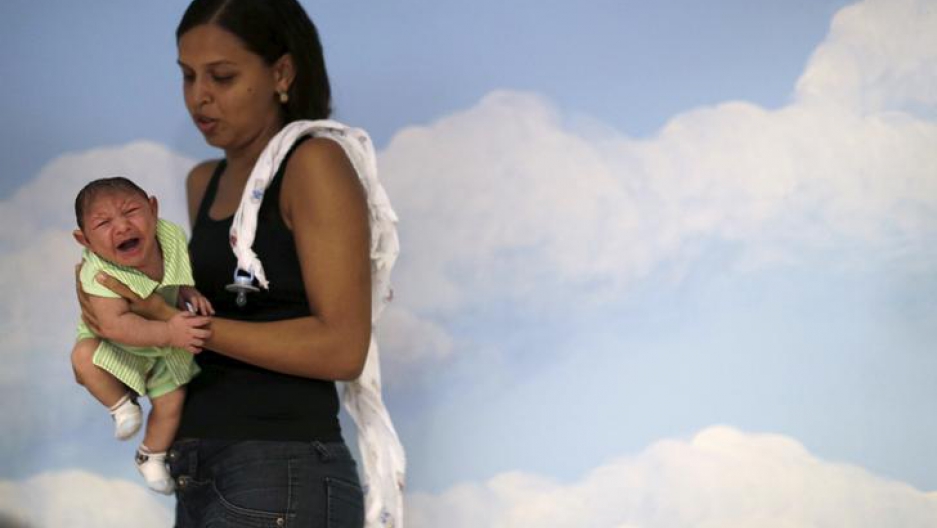 Daniele Ferreira holds her son Juan Pedro at a rehabilitation center in Recife, Brazil, January 28, 2016. The baby was born with microcephaly, a neurological disorder that damaged his brain and also affected his vision, a condition associated with an outbreak of Zika virus in Brazil.
Credit:

The World Health Organization today declared Zika an international public health emergency. Meanwhile, other experts are suggesting the scare may be bigger than the reality.

But, no question, there’s big concern — especially in Brazil — over pregnant women getting sick with the virus, because of a possible link between Zika and microcephaly. That's the rare condition in which a baby is born with a head much smaller than it should be and can be life threatening.

But there's still a lot we don't know about microcephaly itself, much less its connection to Zika. For example, take the case of Ana Carolina Cáceres. She’s a Brazilian woman born with the condition, but who has consistently defied the odds.

"On the day I was born, the doctor said I would have no chance of survival. I suffer from microcephaly, my skull is smaller than average. The doctor gave his diagnosis: She will not walk, she will not talk, and over time, she will enter into a vegetative state until she dies. He, like many others, was wrong," Cáceres says. "My father says that I started walking from one day to the next. When I was one, I saw a puppy passing by and got up to go after it. I grew up, went to school, graduated and went to university. Today I'm a journalist and I write my own blog. I chose journalism to give voice to people like me who do not feel represented. I can say that today, I am a fulfilled, happy woman."

Dr. Ganeshwaran Mochida, a pediatric neurologist at Children's Hospital in Boston, has been seeing children with microcephaly for over 15 years. He points out that microcephaly is not a single disease.

“It actually refers to a condition in which the brain (head) size is too small for age and gender. The type and severity of problems related to microcephaly depend on the cause. Common problems are cognitive and speech delay, motor impairment and seizures. If the brain stem is affected, problems could be much direr because the brain stem controls vital functions such as breathing. If a child born with microcephaly has intact vital functions, he or she may live into adulthood, likely with intellectual disability."

But clearly, that's not always the case.

Mochida points out there's no definitive clinical proof that the recent outbreak of microcephaly is linked to Zika. However, at its announcement today, the WHO said the evidence of a causal relationship is “mounting.” Mochida adds that “even if a clinical and epidemiological link is established, it will take a lot of time and effort to understand the biological basis of the condition."

While there are currently no treatments or cures for microcephaly, Mochida says there are several positive interventions.

“Speech, occupational and physical therapy and appropriate monitoring and management of potential complications can go a long way in improving a child’s life. Therefore, everyone with a diagnosis of microcephaly should have a thorough evaluation by a specialist. If a genetic cause is identified, accurate genetic counselling for future pregnancies can be provided.”