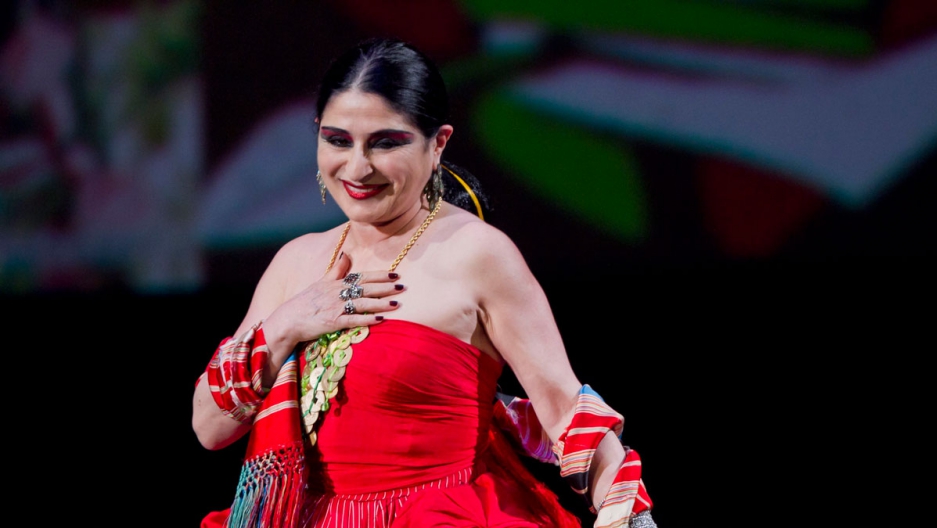 “National treasure” is a term that gets thrown about a lot. But in Mexico, it probably does apply to Astrid Hadad.

She’s been a star at home ever since her breakout role in the mid-80s in Donna Giovanni, an all-female version of the Mozart opera Don Giovanni.

Since then, she’s built a repertoire that’s all her own.

The cabaret performer appeared on stage in New York recently, and — speaking before the show — she used lots of words to describe herself: Singer. Artist. Costume designer. Cabaret performer. Political provocateur.

That’s a lot of things in one person.

“It’s what I am,” she said. “When I began to sing, I realized it was not enough only to sing, and I began to sing about politics. And after [that], I began to design my own costumes to enforce what I was saying.”

An Astrid Hadad cabaret performance is a total work of art, with every element adding something distinctive to the mix. Take the costumes. Over the course of this performance, Hadad transformed into an Aztec pyramid, a masochist, a flag and more.

The German cabaret of Kurt Weill is an influence, but Hadad’s style is much more colorful.

“I invented my own kind of cabaret,” says Hadad. “My spectacles are so exuberant, because Mexico’s like that.”

Her pyramid dress, for example, was adorned with colorful skulls, like the ones you might see during the Day of the Dead holiday in Mexico. For Hadad, the skulls show how the Aztecs took the horror of death and transformed it, “into something sweet, something different.”

Hadad is almost 60 years old now — she’s been a fixture in Mexican culture for decades. But she retains a singularly naughty sense of humor.

“I sing ranchero, Mexican music, but in the way of heavy metal” — or, as she puts it, heavy nopal. (Nopal is an edible cactus common across Mexico.)

For one of her songs at the GlobalFest performance New York, she dressed as a leather-bound sinner, swinging a cat-o-nine-tails.

“The song says, like a good Mexican I will suffer the pain quiet[ly]. And when I say that, I whip myself.”

And whip herself she did, leaping about the stage, pausing occasionally to bash her head against what seemed to be a rock made of polystyrene.

It was epic stuff.

Our father in the north

Speaking of which, Hadad didn’t forget to address the strange push and pull that exists between Mexico and its neighbor to the north — a relationship for the ages if ever there was one. Years ago, she wrote a pointed version of the Lord’s Prayer, which she performed on stage mid-set.

“Holy Father that dwells in another country; blessed be your new order; let your dollar come to us; thy will be done; as it is in the north as it is in the world; give us our daily McDonald's; forgive the immigrants as we forgive the Marines; don’t let us fall into the nationalistic philosophies; and liberate us from the Chinese businessman; Shalom, Amen!”

In New York, at least, Hadad delivered on her promise: a spectacle that stopped people in their tracks.