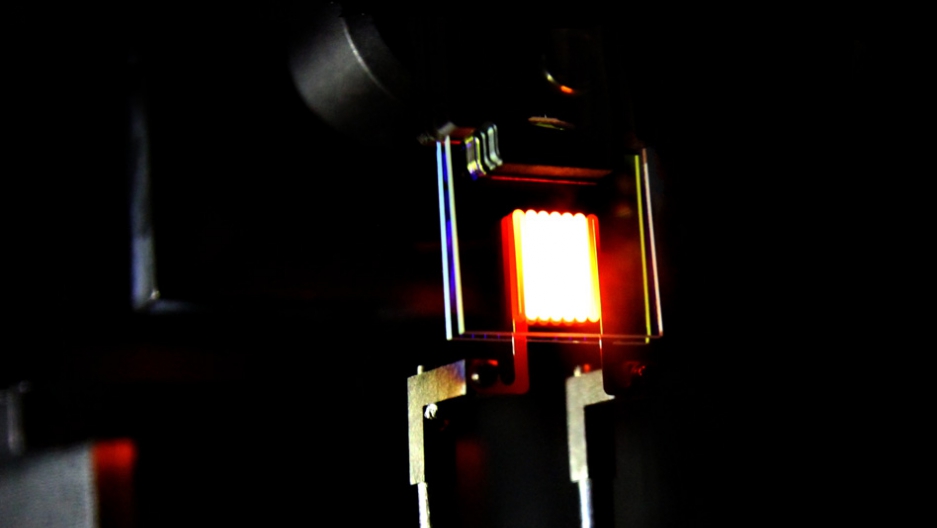 A proof-of-concept device built by MIT researchers demonstrates the principle of a two-stage process to make incandescent bulbs more efficient. This device already achieves efficiency comparable to some compact fluorescent and LED bulbs.

Once, there was the ordinary incandescent light bulb. It shone brightly, but wasted much of the energy put into it as heat. Then came the compact fluorescent. And as costs have dropped, consumers have increasingly been switching to light-emitting diode (LED) technology for many lighting applications, in an ongoing search for a more efficient bulb.

The old fashioned incandescent light bulb is more wasteful and inefficient than you may have realized.

But now, in work published in the journal Nature Nanotechnology, researchers report that nanophotonic devices may be able to breathe new life into that old technology. Physicist and electrical engineer Marin Soljačić and MIT scientist Ognjen Ilic, two authors of the study, explain how they’ve been able to “recycle” some of the incandescent bulb’s wasted heat and re-emit it as visible light, boosting efficiency.

“When you heat up a filiment in an incandescent light bulb, it starts glowing,” Soljačić explains, “A fairly small portion — only a few percent — goes into visible light. But a majority — like 95 percent goes into infrared light, which I cannot see, and it therefore presents losses.”

“What we did,” Soljačić explains, “is we implemented a filter, which is placed in front of the filament and lets visible light through, but it reflects infrared light back toward the filament, thereby recycling the light. And there it gets absorbed into the filament and hopefully next time, emitted into visible light. ... It enhances the overall efficiency of the system.”

Soljačić and Ognjen aren’t trying to replace LED technology. They are, however, hoping that their new efficient bulbs can be used for other applications.

“Applications are really for this concept of recycling light,” says Soljačić. “There are many different ways of converting heat into electricity and this particular one, the way that it works is you get something to a pretty high temperature — let’s say 1200 celsius or so, and it starts glowing, and then you use photovoltaics. It's sort of like a solar cell. ... You place it in front of this hot object, and then it converts this emitted light into electricity. ... This concept of recycling light could be beneficial for energy conversion.”

Using a photovoltaic device would be similar to the way many people use solar cells on their roofs. One difference is that this new device would be placed near a heat source instead of on the roof of your home. Ultimately Soljačić and Ognjen hope their discoveries will lead to important technology that can be used to fight global warming.

“In order to address this huge challenge [of global warming], we need to have as many tools in our toolbox to handle it. You can think of this recycling of light as one more tool which will then allow us to try to tackle a wide variety of energy conversion problems,” Soljačić says”