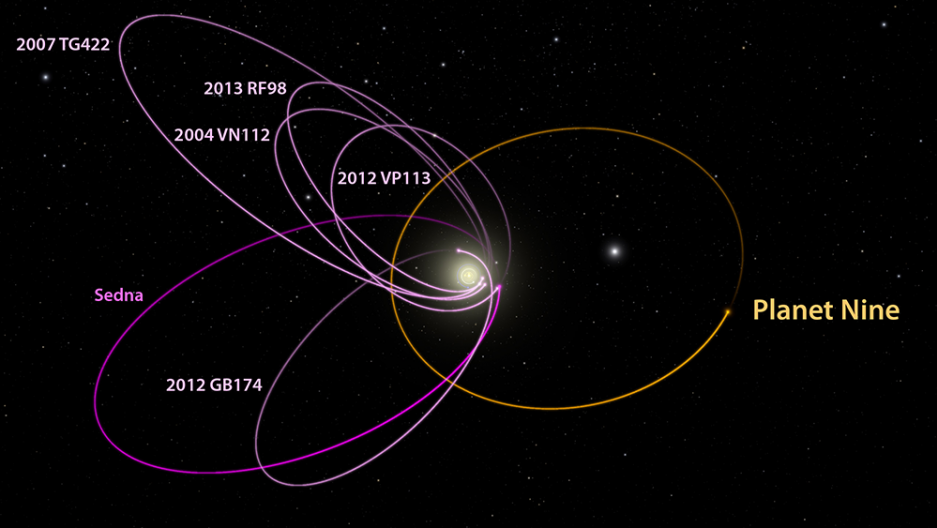 The six most distant known objects in the solar system with orbits exclusively beyond Neptune (magenta) all mysteriously line up in a single direction. Also, when viewed in three dimensions, they all tilt nearly identically away from the plane of the solar system. Batygin and Brown show that a planet with 10 times the mass of Earth in a distant eccentric orbit anti-aligned with the other six objects (orange) is required to maintain this configuration. The diagram was created using WorldWide Telescope.

It used to be that there were nine planets in our solar system. Although some people claimed that somewhere, out there, was a mysterious tenth planet called “Planet X.” In 2006, the IAU reclassified Pluto, in a hotly contested move that left the solar system with only eight official planets.

But recently, researchers published an argument that there is in fact another large planet in our solar system that we haven’t yet seen.

“We spent a good year-and-a-half out of the past two years not believing ourselves and actually trying very hard to prove that this idea was wrong and in fact crazy,” says Caltech’s Mike Brown, “But after the initial hints, we have been finding more and more signatures exactly where we predicted. And it's getting to the point where we believe it. We believe it enough where we're willing to write a paper and stand up and say, ‘Yes. For the past century everybody who said there was a Planet X is crazy. And they were all wrong. But we're right.'”

Mike Brown and his colleague Konstantin Batygin argue that Planet Nine (which is not the same as Pluto, and also not the same as the old Planet X) should have a mass about 10 times that of Earth, and an orbit about 20 times farther from the sun than that of Neptune.

“Which is why it took us so long to realize it was there,” Brown says.

"What we have found," Batygin says, "is really a gravitational signature of Planet Nine. And that signature is seen in the most distant orbits of this debris field beyond the orbit of Neptune that we commonly refer to as the Kuiper belt. If you look at the furthest orbits in this debris field, they all kind of swing out the same way. The only reasonable explanation for this confinement, this grouping of the orbits, is that there's a distant Planet Nine which is rather massive keeping them together."

At this point there are still many unknowns about what Brown and Batygin say is the ninth planet in our solar system.

“We don't know where it is,” Brown says,  “But what we do know is we know its orbit. And what that means practically is that we know its path across the sky. ... So our best guess is that Planet Nine is in the November sky. If you look up straight overhead at midnight on Thanksgiving Day you're probably looking more or less in the direction of Planet Nine.”

Batygin and Brown think Planet Nine is composed of similar materials to Uranus and Neptune: predominantly ice and rock with an atmosphere of 10 to 20 percent hydrogen and helium.

They think they’ll be able to detect the outlying planet sometime in the next two to eight years.

“Mostly, the reaction has been very positive, especially from our colleagues that have read the paper. They're more or less compelled by the arguments,” Batygin says. “There's been also a bit of skepticism, which we are very happy with. ... Ultimately what we are hoping here is that this theoretical prediction of the orbit will trigger a hunt, an observational hunt for Planet Nine. That's the goal of this paper.”

RELATED: The US is losing its darkness at night. Why that's a bad thing.

As far as a name for the newly discovered planet? Batygin says he likes the sound of “Planet George.”

There have, however, been a flood of emails asking Batygin to name the planet “Bowie.”

“I must be getting coerced,” Batygin says. “Because that's starting to sound like a really good idea. But realistically, you know, this is the kind of question that should be left until this Planet Nine is caught on camera.”