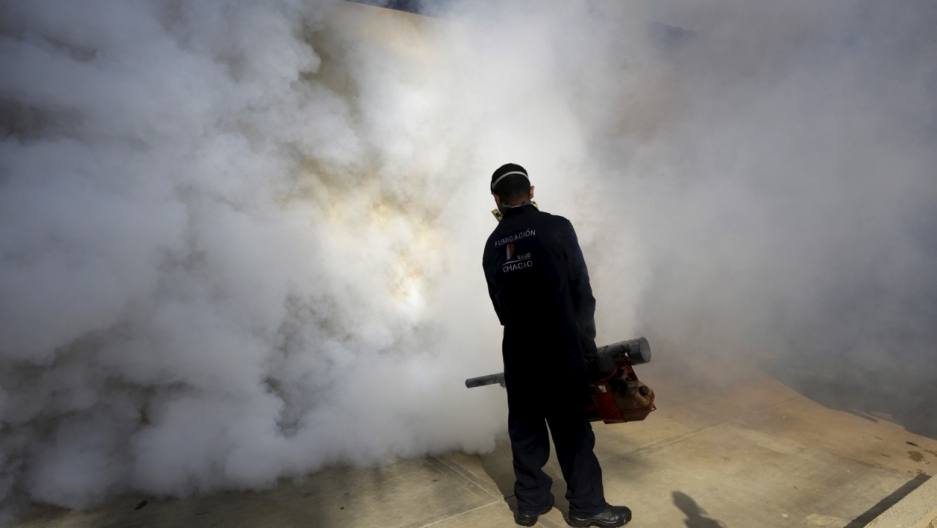 A municipal worker carries out fumigation to help control the spread of the mosquito-borne Zika virus in Caracas, Venezuela on Jan. 28, 2016.
Share

The Zika virus may be the Ebola of 2016, just a lot less deadly. The virus is spreading rapidly throughout the Americas. The World Health Organization said the virus is spreading “explosively.” Health officials are warning of a pandemic. And the news media is starting to take notice.

So, what is the Zika virus? Zika is spread through a certain kind of mosquito that thrives in warmer climates. It’s named after a forest in Uganda and is usually found in Africa and Asia. In fact, until 2015, almost no one in the Western Hemisphere had ever been infected with it.

That’s now changed in a big way. Last May, the Zika virus began showing up in patients in Brazil. And since people in the Americas have no immunity to it, the virus began to spread quickly. Millions of people may already be infected across South and Central America.

The Zika virus, however, is not like Ebola. It won’t kill you. Most people who contract Zika won’t even notice. Those who do will have a fever, joint pain, maybe red eyes. All of it is treatable and it’s unlikely a patient would even have to be admitted to the hospital.

There is one exception: pregnant women. Scientists suspect that a rise in the number of cases of pregnant women giving birth to children with abnormally small heads and brains — a condition called microcephaly — is related to the rise in Zika.

Typically Brazil sees about 150 microcephaly cases a year. It is right now investigating some 4,000 cases. The connection between Zika and microcephaly, however, is circumstantial. Scientists are still researching to see if Zika is actually the cause.

Whether the connection between Zika and microcephaly is true or not, many pregnant women in South and Central America are worried. So are their governments. Some governments are even recommending that women postpone getting pregnant for the next two years.

The growing health crisis in Brazil, where the most cases of microcephaly have been reported, has sparked a new public debate over women’s rights to abortion for troubled pregnancies.

Brazil’s 1940 penal code made abortion a crime in all but two cases: pregnancy from rape and when terminating a pregnancy is necessary to save the mother’s life, writes GlobalPost Senior Correspondent Will Carless. The only amendment to those laws came more than 70 years later, in 2012, when the Supreme Court ruled that women could also terminate a pregnancy if the fetus was diagnosed with anencephaly, a rare condition where the child is born missing pieces of the brain and skull.

The sudden reported uptick in microcephaly cases has reinvigorated a cadre of powerful women’s rights activists in Brazil, some of whom are already preparing a fresh appeal to the Supreme Court to consider granting the right to abortion in the case of microcephaly.

It won’t be easy. Abortion is a controversial subject in Brazil, and the country’s political climate is not friendly to the debate. Conservative politicians have even recently pushed for a harsh new bill that would require rape victims to undergo physical exams before being allowed an abortion because, you know, they haven’t been through enough already.

And while everyone is freaking out about Zika, our old friend swine flu has come back for a sentimental and rather deadly visit. In Russia, Ukraine and Armenia, the virus has killed more than 150 people.

Swine flu had its moment in 2009, you might remember, when it grew to a global pandemic and killed tens of thousands. There is no need to panic this time, though. Since 2009, the virus has become a seasonal sickness that can be treated with vaccinations. The WHO says there is no danger of a new pandemic.

That isn’t stopping people in some parts of Russia and Ukraine from wearing surgical masks on public streets. The paranoia is real. One Russian politician even suggested the outbreak was planted by the United States.