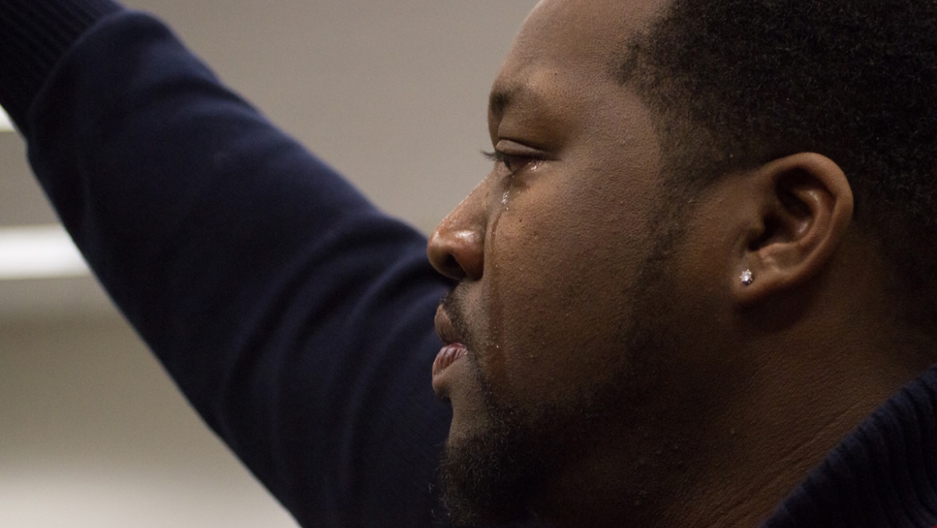 Martinez Sutton cries after speaking to the Chicago Police Board asking for justice for his sister Rekia Boyd on Nov. 19, 2015.

In his sadness and anger, Martinez Sutton spoke the truth at a Chicago Police Board meeting on Jan. 21. The families who have lost a loved one to police violence are members of a gruesome club, said Sutton, whose sister, Rekia Boyd, was killed by an off-duty police officer in 2012.

Club membership is unsolicited and paid in tears, say those close to the families.

Sutton, whose sister’s killer is still on the police force, confronted members of the board at the meeting. As police officers moved to whisk him out of the room, activists built a hedge around Sutton, separating him and the officers. TV cameras captured the incident.

Airicka Gordon-Taylor, who knows Sutton and his family, saw the video.

“There is a club of families that have lost their children to violence, and each week there are new families being added to this club. And that’s what he means,” says Gordon-Taylor, founder and executive director of the Mamie Till Mobley Foundation.

Till Mobley was the mother of Emmett Till, the Chicago teenager whose brutal death at the hands of white men in Mississippi in 1955 was a defining moment in the civil rights movement — and the family’s private story. Gordon-Taylor, Till’s cousin, says the foundation and his remaining family members are part of a national network of people whose lives have been altered by violence – many at the hands of law enforcement officers.

In the weeks, months and years since the deaths of their loved ones, many of the families have turned personal tragedy into public action.

“A big part of healing is making meaning of it,” says Monnica Williams, an associate professor of psychological and brain sciences and the director of the University of Louisville’s Center for Mental Health Disparities. “And one way is to become active and helping others get through it.”

At the heart of the emotional struggle for black families is a psychological injury that is part of the African American experience with racism. Williams, whose work explores the intersection of racism and post-traumatic stress disorder, says the symptoms of race-based traumatic stress injury and PTSD are similar. People are prone to experiencing depression, anxiety and even nightmares. They may feel down and tired. They are often unable to cope with their circumstances. And they feel that the world is a dangerous place and they aren’t safe, she said.

Justice is part of the healing process, too. But that can be hard to achieve when studies show that few police officers are even charged with misconduct, and prosecutors contend it is a daunting task to convict a police officer.

The families' grief is different from when a family member dies of an illness or other causes, Williams explains.

“It is so unexpected, and it comes from people who are supposed to be protecting you,” she says. “And in this sort of death often there is no accountability, no apologies and no justice."

The legacy of Mamie Till Mobley

Sutton wasn't the only grieving family member at the meeting. The mother of Sandra Bland, who died in a Texas jail last summer, and the daughter of Bettie Jones, who was shot by a Chicago police officer in December, also addressed the board, which determines discipline for police officers accused of misconduct.

In her work, Gordon-Taylor, has witnessed the trauma of mothers, who, like Till Mobley, have lost children under violent circumstances.

“I totally agree with that [comparison to PTSD],” she says, adding that she wants the foundation to offer training for the disorder. “Many of our families are dealing with that ... especially the mothers.”

In the rush to manage court dates, lawyers, family grief and their own feelings, many people struggle under the pain and pressure, she said.

Anniversaries trigger more anguish. The club responds by supporting whatever events or memorials are planned — and by simply listening.  And while Gordon-Taylor says she cannot fully understand the pain of the families because she hasn’t directly lost a loved one, the mothers in the group can.

Sixty years after Till’s murder, she says her family still feels the effects. People forget that two relatives who were there when Till was abducted are still alive, she said.

Last year, for the commemoration of the 60th anniversary of Till’s death, the foundation convened a series of events that drew a network of mothers, including the mother of Amadou Diallou, who was killed by four New York City police officers in 1999. They prayed at Roberts Temple Church of God in Christ, the church where Till was eulogized, his casket open so the world could see the viciousness of racial hatred. His mother’s decision to show his mutilated corpse shocked people into action against a system of state-sanctioned violence against black people.

Gordon-Taylor said, “There’s a piece of Mamie in each of these mothers.”

As part of the commemoration, the mothers went to the cemetery where Till Mobley and her son are buried. They walked from his grave to his mother’s grave. Gordon-Taylor said the symbolic journey means the mothers will be “fighting for justice for their children until they go to the grave.”

January's Police Board meeting was intended to solicit public input on the city’s next police chief; instead the two-and-a-half hour meeting became a forum for people to voice their anger at police shootings of primarily African Americans and Latinos.

“You need to understand the pain,” said Geneva Reed-Veal, Sandra Bland's mother. “It’s real and it’s deep and it goes farther than what anybody can explain to you because you go through so many things in your mind as you miss your relative.”

Bland, who had moved to Texas from Naperville for a job, was found dead in a Waller County jail cell after being arrested following a traffic stop.

LaToya Jones, the daughter of Bettie Jones, also addressed the board. Her mother was shot to death by a Chicago police officer, along with 19-year-old Quintonio LeGrier. The officer, who was responding to a domestic disturbance call, shot LeGrier when he became combative. Jones, who lived downstairs, was accidentally shot.

“That’s all we had was our mom, she was our everything,” LaToya Jones told board members. “Now she’s gone. We lost our mom to gun violence. She didn’t die of a natural cause; she died at the hand of a trigger-happy cop.”

About an hour into the meeting, Sutton calmly walked up to the microphone. He began by telling board members he was “beyond angry” because Detective Dante Servin, who killed his sister, was still on the police department’s payroll. Servin shot Boyd when he opened fire on a group of people at a park, one of whom he mistakenly thought had a gun.

The City of Chicago settled a wrongful death case with Boyd's family for $4.5 million a year after her death. Last April, Servin was found not guilty of involuntary manslaughter charges. The Police Board is considering whether to fire him.

“It’s been four years ... [and] ain’t nothing been happening since my sister been gone,” Sutton said. He asked board members if they could fathom how it feels to look his mother in the eyes every day and see her pain at her loss.

Reed-Veal told the board that she was frustrated with the trickle of information from authorities explaining how her daughter died while in police custody.

“If you talk about keeping the peace in the community ... you have to understand that there can be no peace if we can’t even get the pieces of information that we need to find out what happened to our families,” she said. “We are dealing with this life-long pain that you can’t take a picture of … We’re asked to wait for years and months while your people are allowed to do all of what they want to do. They’re on administrative leave. Our people aren’t on administrative leave, they’re gone.”

Williams says it's important for government and police to acknowledge wrongdoing.

“The families are horribly affected and the whole African American community when we hear about these things,” she says. “We all feel a sense of unsafety and terror. The effects are far reaching.”

“A lot of families are going through what my family went through for 60 years," she says, "and it is reopening an old wound.”

This story was originally published by The Chicago Reporter, a nonprofit investigative news organization that focuses on race, poverty and income inequality.