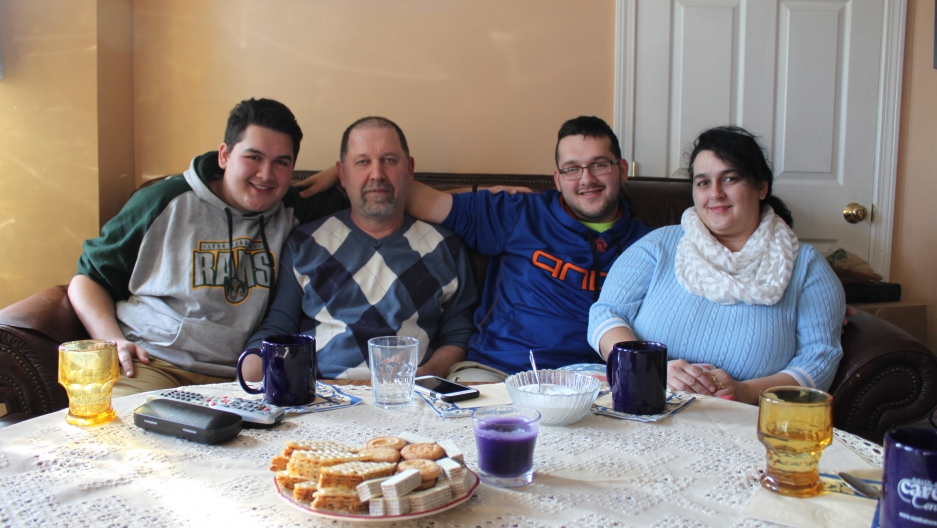 The Stipanovic family at home in Lynn, Massachusetts, are, from left, Anto, Zvonko, Marko and Ana.

I went to see the Stipanovics right after Christmas. It's a big holiday for them. They have a feast with other Croatian friends, roasting a whole pig on a spit in someone's backyard.

"People think that's weird," says Anto Stipanovic, who's a senior in high school. "[At the supermarket], they're all like 'Oh, you're weird, you're taking a whole pig. But we see that as normal. It's a tradition. We spin it like on the fire for a couple of hours."

"You talk, you tell stories," says his older brother Marko, a student at Boston University. "You make fun of each other."

"Have a drink or two," his mother, Ana, chimes in.

Everyone's off work and the family is relaxing at a table next to the Christmas tree in their apartment in Lynn, Massachusetts.

Ana and her husband Zvonko grew up in the former Yugoslavia. They are ethnic Croats from a town called Kotor Varoš in Bosnia-Herzegovina. Before Yugoslavia disintegrated, Croats, Serbs and Muslims lived side by side there. But when the Bosnian war broke out in 1992, Serb forces drove the Croats and Muslims out.

"We had to buy the (bus) ticket," says his wife Ana. "They're kicking us out, but you have to pay, and they take your passport. They take everything. You cannot tell who you are."

The ended up in Germany as refugees. When the war ended, they didn't feel they could go back because their hometown was no longer a hospitable place for Croats. So they applied for and received asylum in the United States. They landed in Tucson in August 1999. Entry was a little rough.

He explains that they had flight delays and arrived after midnight. They had a long wait at the airport before they were picked up. It was about 3 a.m. when they arrived at their apartment, tired and disoriented, with two toddlers in tow.

There was nothing in the fridge, not even a carton of milk. So Zvonko asked the woman from the resettlement agency whether they could drink the water from the faucet.

"She said no, and she left the apartment," he says. "I don't like to say that happened."

Luckily one of their new neighbors in the building was a Croatian refugee too. In the morning she took them to buy food and get settled. But Ana remembers how awful it felt.

"You know the first time you come, you don't know anything," she says. "It's a different country, different everything, different continent. You have little kids, you don't have milk so you're really frustrated but you cope with it."

They had been coping for years by then and they would continue to do so. They see themselves in the Middle Eastern refugees they see on TV today. Even part of their trek across Europe was the same.

"You're looking for peace," Ana says. "Everybody was looking to make sure they have peace and quiet ... so you can continue life."

Before a year was up, they moved from Tucson to Boston. They had friends there. And a dream.

Zvonko and Ana landed housekeeping jobs in a hotel downtown. Fifteen years later, they've adapted to life in the US. He still works at the hotel. She went back to school and now works as a case manager in the career center at a local community college.

Anto is finishing up high school and plans to study business and math. Marko just started at Boston University this month after a year and a half at a community college. He's set on neuroscience and medical school.

He would have gone to a four-year college sooner if it weren't for an immigration snafu. Somehow, his citizenship never got linked to his social security number, so he couldn't get financial aid.

It was just one of the many little bureaucratic barriers they have faced here. Ana says she wants to help other people so they don't get tripped up the way Marko did. They've already fixed Anto's papers so it doesn't happen to him.

"We did it right away, so I don't have to go through the same problems that he had to go through," Anto says.

By any measure the family has done well. You can feel it, hanging out with them, around the tree, three days after Christmas.

"We do have everything," Ana says. "We have our boys. We have each other."

They also have a longing for home that will probably never go away. Which is why they roast a pig with Croatian friends at the holidays.