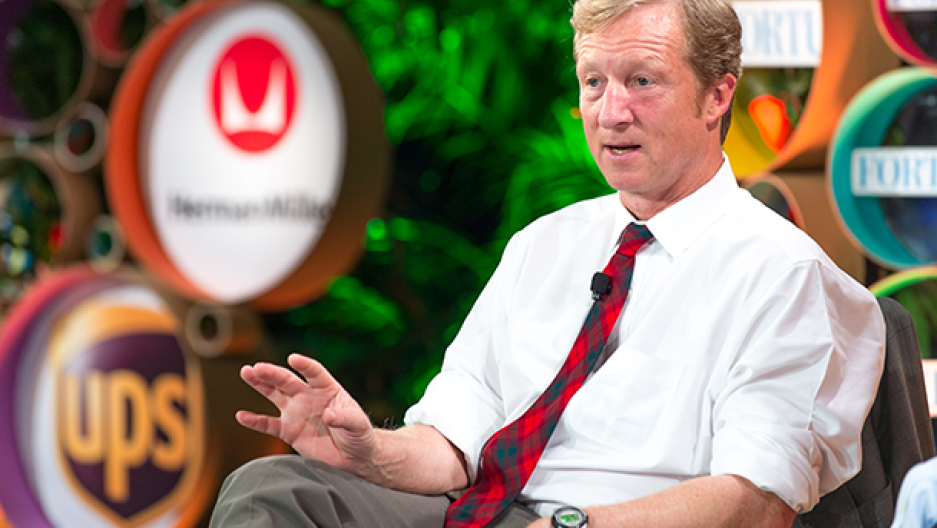 Tom Steyer is co-founder of Next Generation. His group promotes solutions to two of the biggest challenges confronting the next generation of Americans: The risk of dangerous climate change, and the threat of diminished prospects for children and families.

Opponents of the move from fossil fuels to renewable energy frequently cite the cost — financial as well as on jobs — for their opposition. Investor and philanthropist Tom Steyer, who has been on the front lines of this debate for some time, says that's nonsense.

In fact, he contends, the opposite is true.

“The argument that moving to clean energy is a job killer is false,” Steyer says. “Not only does it create net new jobs, it also reduces energy costs across society and raises people's take home pay.”

Steyer points to the state of California, where his environmental non-profit Next Generation is based, as an example of how switching to a clean-energy economy can benefit everyone.

“By the end of this year, we expect there will be up to 500,000 Californians employed in clean energy jobs,” Steyer points out. “In addition, we've just done a study within the last month that shows that nationwide, if we accelerate the move to a clean energy economy, it will produce a net additional million jobs by 2030.”

California has been leading the country in terms of moving to a clean energy economy, while at the same time its economy has been growing faster than the rest of the United States, Steyer says. “So when we think about California’s [carbon pricing] policy and how it has impacted us, we can see that moving to a clean energy economy is actually part of the reason that California's been growing faster and producing jobs faster.”

Steyer expects to see the changes in California spread to other areas of the US as the nation begins to adopt clean energy more widely — despite the political gridlock over the issue in the nation’s capital.

“We are huge believers in democracy, and that means the people of the United States, not just the elected officials of the United States,” Steyer says. “What we've seen [in polls] over the last six months is an incredible move across the board for Americans, regardless of political party, to accept the idea that clean energy is the future and that we should move faster towards it, and the idea that doing so will prevent climate change. ... We’ve seen a 12 percent move by Republicans in the last six months, which is unheard of.”

Outside the United States, in places like India, the transition will be harder because the capital costs of renewable energy are much higher. But Steyer believes this can be overcome, as well.

“As we move forward, public and private entities are going to have to push nations, to reward them for making what are smart decisions, because I know that the capital costs in India are very high compared to what they are in the United States,” Steyer says. “But the same is true for coal plants ... The price of renewable energy is dropping precipitously, and it will continue to drop. ... So, what’s going to happen for India is that this is going to be, by far, the best choice that they can make.”

India and other countries are not going to be asked to sacrifice, Steyer maintains, because they will be making economic decisions that are in their own interests — and which are also going to help them avoid greenhouse gas emissions.

During the transition, however, the international financial community needs to “start checking exactly what their function is and what they are thinking,” Steyer says.

“The fact of the matter is, if you look at the United States of America, a number of banks have withdrawn lending to coal absolutely,” he points out. “So why they would think that would be different in other parts of the world, I'm not sure. If you look forward over the life of a [power] plant, which is at least 30 years, the idea that that could be a good investment, that it’s going to be a safe investment, seems to me to be kind of silly.”