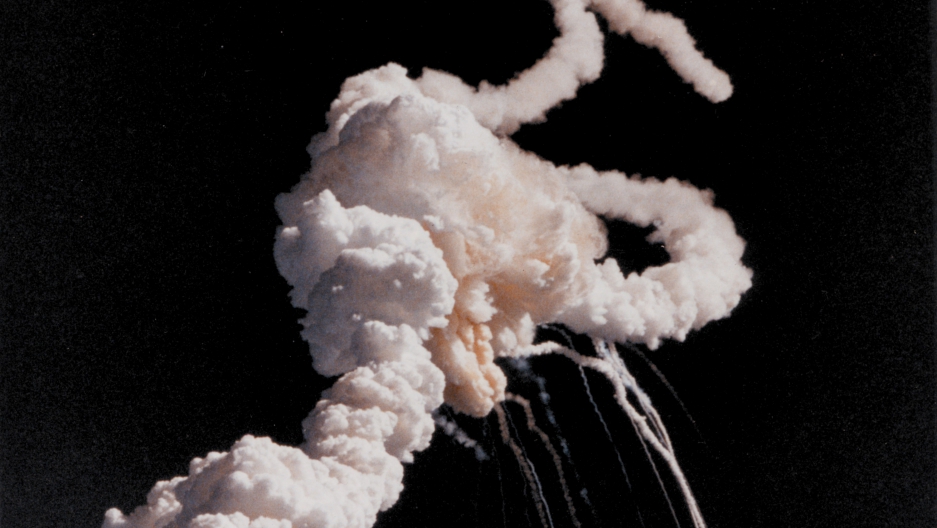 The Space Shuttle Challenger and her seven-member crew were lost when a ruptured O-ring in the right Solid Rocket Booster caused an explosion soon after launch from the Kennedy Space Center in this NASA handout photo dated January 28, 1986.

Where were you when...

There are only a handful of historical moments that complete that sentence.

For many children of the early 1980s, it's where were you when the space shuttle Challenger blew apart shortly after liftoff.

That happened 30 years ago.

Back then, we were still competing with the USSR for dominance in space. So it made us wonder how the Soviets covered the disaster.

"I remember the report from the correspondent," says Famil Ismailov from the BBC Russian service. "It was the first report of the day. The striking part were the faces. You could see them changing all of a sudden. You could see the shock and then the grief."

The Soviets were quick to send condolences. "I remember the presenter said something like, 'The whole world today is with the United States, with American people, grieving about the loss of the astronauts,'" he says.

Ismailov says he also found it interesting that a teacher, Christa McAuliffe, was one of those on board.

"It would've been impossible for a Soviet at that time," he says.

In the days after, when the horror and grief subsided, Ismailov says no one in his sphere treated the disaster as proof of Soviet space superiority. "At that time we were opening up to the West," he says. "It meant that we are there together. So it's not so much a race anymore as it was working together in space."

The Putin era has people forgetting, journalists included, that right after the Cold War ended, relations between the two countries were warm. Ismailov recalls the moment vividly.

"I had just graduated college and the world had just started opening up," he says. "You felt so much optimism."

Much of that optimism has changed. Ismailov says it's hard to say if anyone in Russia commemorated the Challenger disaster, even with a quick blurb.

"I didn't see anything in Russian media."