It's a cold winter day and there are camp fires everywhere

When you cross the boulevard in the residential neighborhood of Basroch in Grande-Synthe, you enter a different world. The migrants’ camp of Grande-Synthe is spread out on a swampy field surrounded by woods. You can spot small blue and green tents along the sides of the road.

Once you pass through a gate guarded by police, the sight of the camp is gut-wrenching. Lines of tents planted in the mud. They’re crammed together between trees and piles of trash. Some are made of sticks and tarps, held down with anything from sacks of flour to rocks, cans, broken strollers or bicycles.

Shay Rojansky is an Israeli logistician with Doctors Without Borders. This is Rojansky’s first mission, though it is no beginner’s mission. He says even though he’d seen videos of the camp before he arrived, he couldn’t believe what he actually saw here.

“I was appalled, and then I actually heard from my colleagues that it’s actually, even comparing with other refugee camps they have seen in war-torn places and Africa and so on, this is actually a bad case,” He says. “I came here when the weather was worse in terms of rain and so on, and it was truly a swamp. I was walking around here in a swamp and seeing tents inside and it’s horrible.”

The wet mud is difficult to deal with, but the piles of trash here also have attracted rats who run around the camp, even inside the tents.

The camp’s population ballooned from 50 to 2500 over five months — which places a huge burden on this small suburban town of 21,000 people. That’s why the town and local charities called in Doctors Without Borders for help. So far, the town of Grande-Synthe and the NGOs have provided most of the support and funding for the camp. The French government has not done so yet.

Françoise Lavoisier works with a local group called Salam that provides clothing and hot meals at the camp. She says she has been volunteering for over 10 years but has never seen so many families here. She’s worried about the estimated 200 children under 10 who live here. 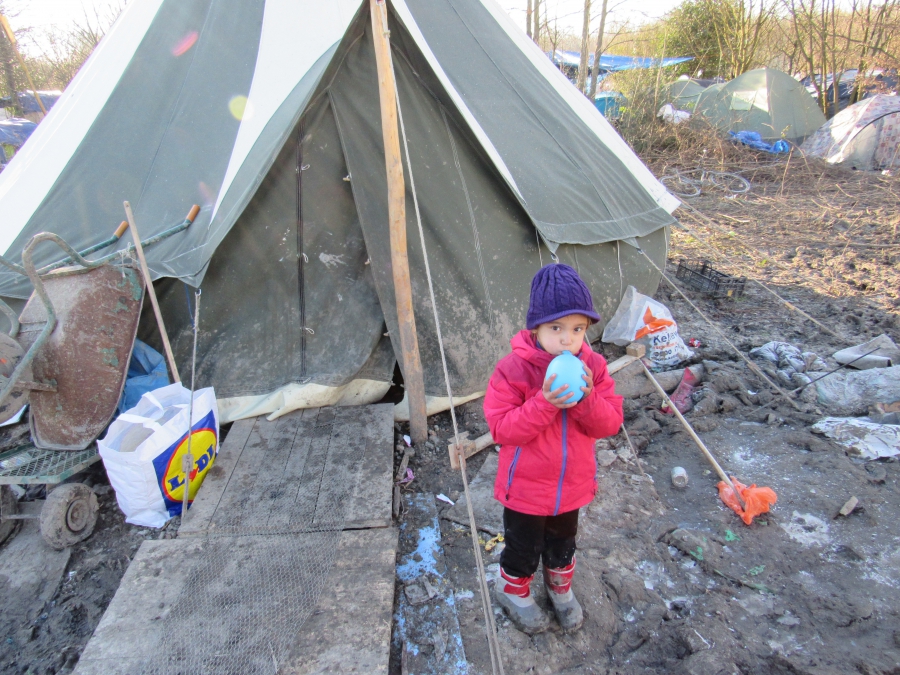 “It’s winter, it’s cold, the bad weather is going to last for a while,” she says, “and all these infants and children and mothers, what are we going to do with them?”

The town is preparing a new camp with heated tents, but it will take at least a month to get it ready and a few children have already suffered from hypothermia.

In the meantime, trucks deliver firewood a few times a day, which sends men and children running to grab armfuls. There are campfires everywhere.

Jort Baqi is from Mosul in northern Iraq. He left behind an elderly mother who couldn’t travel. Like most of the people here, he’s a Kurd fleeing the violence of ISIS, which controls his hometown.

“Our house is gone. Because of the war, all the stuff is gone. So we come to Europe for help,” he says.

He walked a lot of the way and took some trains to get here. He says he wants to go back home to Iraq when it’s safe. But for now he’s stuck at this camp.

Tents and trash thrown together

“I like these people,” he says. “The support is OK, but the place is no good place. Very cold. Jungle cold. Raining.”

Gona Aziz is also a Kurd who fled Iraq. Through an interpreter, she tells me she’s from Gwer, near Irbil. She undertook the perilous trip to France with her four young children. She says her husband was a Peshmerga fighter who lost both his legs. He went to stay with friends so she could take the children out of the country.

“On October 5, I had to leave my city,” she says, “because Daesh had taken it. They had captured my father and cut his throat; we found his body later on. They also kidnapped my two brothers and asked for ransom. We couldn’t pay ... so I put the children in the car, and drove to Erbil.”

She drove to the Turkish border, then took a bus to Greece, then a boat to Italy, then trains to France.  Now she’s not sure she should have made the journey.

“I had so many ordeals,” she says. “If I’d known what I’d have to go through and how I would live in this camp, I would never have left Iraq. I would have stayed there so that Daesh could come and cut my throat and my children’s throats. That would have been better. No one is threatening us here, but we won’t be able to live in these conditions,” she says.

In spite of all, Aziz looks strong, but like many people at the camp, she is losing hope. She has no news from her husband, and her oldest child is sick.

“Nights are really cold,” she says, “and I don’t sleep much because I must watch over my children.”

Fortunately, she has relatives in England who brought her food, clothes and money. For many here, Britain is the Promised Land.

“All my loved ones are there,” she says, “my husband’s brothers, my sisters. If I make it there, they may be able to help me, but if I stay here, I have nobody.”

Beyond the cold and the mud, another issue is the lack of sanitation.

There are only 20 chemical toilet stalls here for the entire camp. Rojanski of Doctors Without Borders says that’s about to change.

"Actually, at the moment, we’re looking into doubling the capacity and also doubling the frequency of the emptying of these toilets," he says. "You know, for 2500 people, that’s nothing really nothing. So it's a dangerous situation."

Showers are also an issue. The camp can only provide about 240 a day, mostly for men.

"There's a big population of women who don’t really leave their tents," Rojansky says. "They’re afraid, making the trip from any corner of the camp all the way over there is not a trivial thing. There's questions of modesty — it's not easy. It’s a communication and a cultural thing.

On top of that, smugglers who hide at the camp used to charge migrants to use the showers.

Hassan Dyar is one of the newest residents. He, his wife and 5-year old daughter arrived from Sulaymaniyah in Iraq just a half hour ago. Dyar had to sell his house to pay a smuggler to bring them to France, and he has nothing left.

Hassan Dyar, his wife and daughter, just arrived at the camp. They are Iraqi Kurds from Sulaymaniyah

He is shocked that their shelter tonight will be a rudimentary tent, wedged between piles of garbage.

His daughter Dia’s not happy to be here either, but she knows she’s headed somewhere better.

“I want to go to England” she says, through the interpreter.

She might not get there anytime soon. The UK says it will consider asylum for migrants with family in Britain. But they have to apply for asylum in France first.

When I ask Dia if she has already learned a few English phrases, her mother jumps in with a prompt. And with a big smile on her face, the little girl begins to sing the ABCs in English. 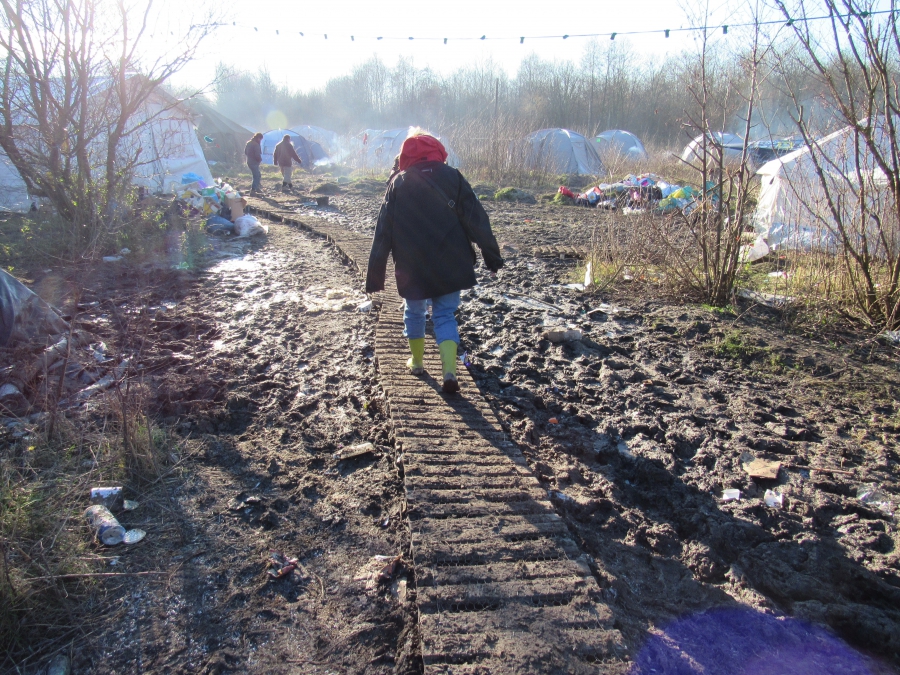