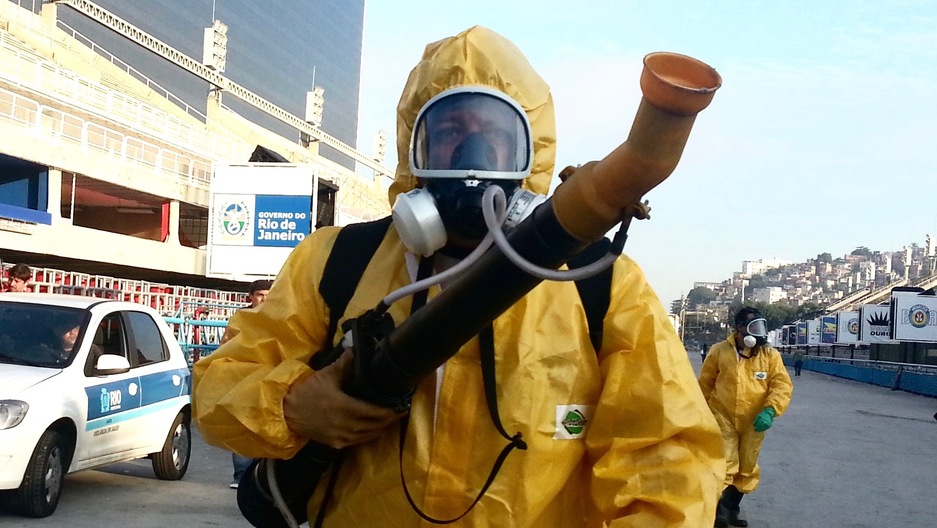 A health worker stands in the Sambadrome as he sprays insecticide to combat the Aedes aegypti mosquitoes that transmit the Zika virus, in Rio de Janeiro. Inspectors are spraying the insecticide around the Sambadrome, the outdoor grounds where thousands of dancers and musicians will parade during the city's Carnival celebrations.

Fumigation this week at Rio de Janeiro's samba stadium was just one of the measures city and Brazilian health departments are currently taking to combat the Aedes aegypti mosquito, which spreads Dengue fever and chikungunya and Zika viruses.

Concern about Zika, which can cause flu-like symptoms, spiked in Brazil in recent months as health officials announced it may be linked to a rise in babies born with shrunken heads, or microcephaly.

Most cases of Zika and microcephaly have been reported in Brazil's drought-prone northeast, where tanks of emergency water make fertile mosquito breeding grounds. But Rio City Coordinator of Health Vigilance Marcus Vinicius Ferreira, says extra cautions are being taken in the city "because it is a city of big events, and you have agglomeration of people from various parts of the world and states in Brazil, which facilitates the introduction of viruses."

On Tuesday, Ferreira oversaw pesticide spraying — a weekly occurrence — at Rio's 70,000-seat samba stadium, where tourists are scheduled to watch parades on February 7th and 8th. Ferreira says that due to improved calibration of pesticides and citywide inspections of standing water, Rio's infestation index of Aedes aegypti is under half of what it was four years ago.

Since October, the state of Rio has registered 122 suspected cases of microcephalia that may be linked to the Zika virus, according to Brazil's Ministry of Health, compared to 1,306 cases in northeastern Pernambuco State.

Two cases suggest the Zika virus may be spread through sex; when asked about this, Ferreira responded that Rio's city government is concerned about sexually transmitted diseases every Carnival and will make sure condoms are available at carnival venues and at health outposts throughout the city. In addition to activities in the samba stadium, over 500 street parades have already begun across Rio.

Ferreira says the sites of some of these parades will be fumigated, as will all Olympic venues beginning in April. Facilities still under construction present a heightened risk for mosquito infestation, but authorities say they will be inspected and treated carefully.

After a national public health emergency was declared in December, federal troops have been deployed to spray for mosquitos across the country and in February will distribute educational material about virus prevention. Ferreira says Rio's existing health infrastructure, with neighborhood health inspectors for every 800 to 1,000 homes, is sufficent that no federal takeover will be necessary.

Some residents of the 66 percent of Rio homes whose sewage goes currently untreated are not confident that current measures will keep their neighborhoods safe. Community organizer José Martins, from the low-income area of Rocinha, says he has seen no measures from health officials to combat standing water and open sewage in his neighborhood of over 100,000 people.

"For decades, we have been advocating for improvements in sanitation as the number one priority for public investments here, while the government has insisted on flashier interventions that do not save money on healthcare costs down the line. Street carnival parades pass through here as well, and people live here, where there is already a higher instance of tuberculosis and other diseases."

For Rio real estate broker Maria José Oliveira Silva, who came down with Zika while traveling in Pernambuco in May of last year, the "spread of Zika represents how precarious the Brazilian public health system is. I had to learn about Zika from television reports before the government announced full information about it."