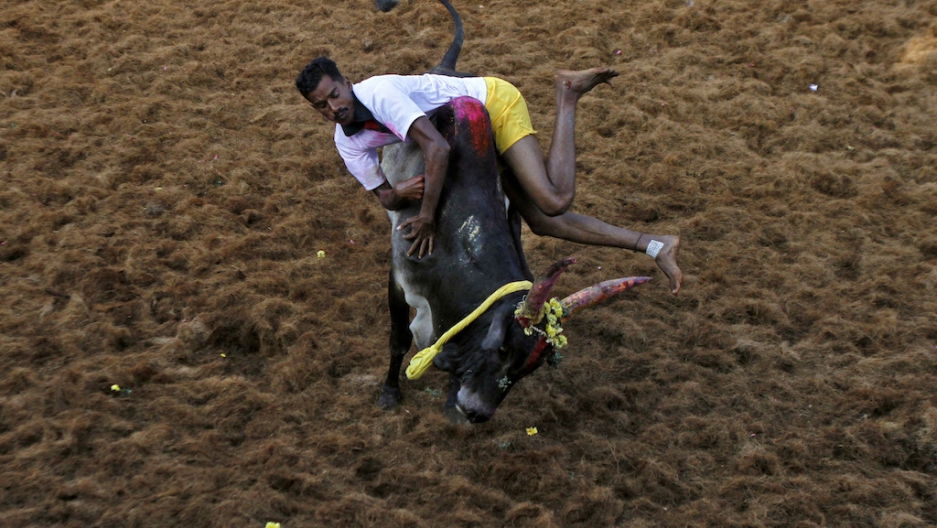 A villager tries to control a bull during a bull-taming festival on the outskirts of Madurai town, about 500 km from the southern Indian city of Chennai January 16, 2013.
Credit: Babu
Share

NEW DELHI, India — Last week, people across India celebrated the coming of spring and the year’s harvest. In the southern state of Tamil Nadu, however, celebrations of Pongal — the harvest festival — were tainted with disappointment. Their bulls were banned from participating.

Every Pongal, thousands of men from Tamil Nadu’s villages gather outside a small enclosure called the vadi vassal. From inside the pen, a temple bull is allowed to run through the crowds uninterrupted. Every bull that charges out after that, however, must try to break free from hundreds of men attempting to tame it by grabbing the hump behind its head.

The event, known as Jallikattu, is a no-holds-barred celebration of the taming skills of Tamil Nadu’s farmers, and the strength and virility of its bulls. Chasing a bull during Jallikattu on the outskirts of Madurai town, January 15, 2009.

The previous government restricted bull-taming in 2011 and in 2014 the Supreme Court banned it altogether. The current government sought to lift the ban just days before this year’s festival. However, following appeals by the Animal Welfare Board of India and PETA India, the Supreme Court ordered a stay to keep the ban in place.

More from GlobalPost: Should India try to get its cows off the street?

Defenders of Jallikattu allege a disconnect between urban activists and policymakers and the traditions of Tamil Nadu’s villages.

“The PETA, AWBI, Blue Cross, all of these are rich, elitist, business-class people,” said Karthikeya Sivasenapathy, the managing trustee of the Senaapathy Kangayam Cattle Research Foundation, which breeds and sells cows. “The bulls from the village are worshipped and celebrated by the people.”

According to Sivasenapathy, the festival is an important part of in-situ conservation of indigenous cattle breeds.

“Jallikattu is a breeding activity, as small and landless farmers cannot afford to have breeding bulls,” said Sivasenapathy, who explains that the event dates back thousands of years to the ancient Indus Valley civilization.

Each village has a temple bull that mates with all 80 to 200 cows in the village. This bull is the one that “wins” Jallikattu, by getting away from all the men who try to tame it. The victory is a sign of its power and spirit, attributes that make it a prime sire for the next generation of the species. “A bull is a docile animal, they are draught and pack animals — anatomically they are not suited for running,” said Nikunj Sharma from PETA India.

According to Sharma, PETA’s investigations at multiple Jallikattu events have found evidence of a long tradition of cruelty. “Bulls are poked in their anus, their tails are broken and bitten. They are beaten and jabbed with sticks and knives just to make them run in a frenzy.”

More from GlobalPost: In Modi’s censor-happy India, American TV has no sex, crime, or cows

Chinny Krishna, the vice chairman of India’s Animal Welfare Board, added to the list. Videos and photographs show bulls being terrorized so they become violent, he told GlobalPost. Irritants are rubbed on their genitals, chilli powder in their eyes, and they are screamed at and even forced to drink alcohol to intoxicate them, he said.

“It’s a gross violation of the Prevention of Cruelty to Animals Act,” said Krishna. “Of course indigenous breeds should be protected, but not by torturing them.”

Several villages defied the ban this year. Others protested what they call the Supreme Court’s imposition on their culture and traditions. Some threatened to surrender their voter ID cards, vowing to boycott upcoming elections if Jallikattu remained canceled. Competitors try to grab onto the bull's hump from the side.

The symbolic move may prove crucial. Tamil Nadu, the state that is home to Jallikattu, heads to the polls in April this year. Usually regional parties dominate the state’s politics, but Prime Minister Narendra Modi’s national party, the BJP, earned itself many new supporters there by moving to reverse the bull-taming ban.

The BJP revoked the ban in the name of protecting India’s rich cultural heritage. But in other instances the party has vowed emphatically to ban the ill-treatment and slaughter of cows, which are considered holy by secular India’s Hindu majority. Numerous cow protection groups exist across the country, and riots and lynchings have occurred over allegations of cow killing.

More from GlobalPost: Why India's beef lynching is not about a dead cow

The bulls, however, haven’t been that lucky.

Some in Tamil Nadu, like bull breeder Sivasenapathy, believe that steps can be taken to prevent cruelty — such as inspections before and after the event. According to him, some regulations were introduced in 2009, after which only a few bulls out of 500 faced cruelty.

“Let’s say in a domestic violence case a man hits a woman. Do we ban marriage or do we enforce the law?” he asked.

In 2014, however, the Supreme Court ruled that Jallikattu was inherently cruel to bulls, whatever measures are taken to prevent additional danger to their welfare.

And the animals aren’t the only ones at risk, opponents of the practice point out. “Thousands of bulls were killed… many more thousands of people were injured, a few lucky ones died, probably,” said Krishna. “You know the kind of a life a poor Dalit who takes part in these events has to undergo if he’s mutilated? Do the bull owners ever send their children into the bull ring? This is a status symbol of rich landlords.”

According to Krishna, the first legal petition against Jallikattu was not filed by animal rights activists, but by a man whose son was killed in the event. The practice caused an estimated 17 deaths and 1,100 injuries between 2010 and 2014.

“I come from a farmers’ background and I am a proud Tamilian. My culture does not include cruelty.”