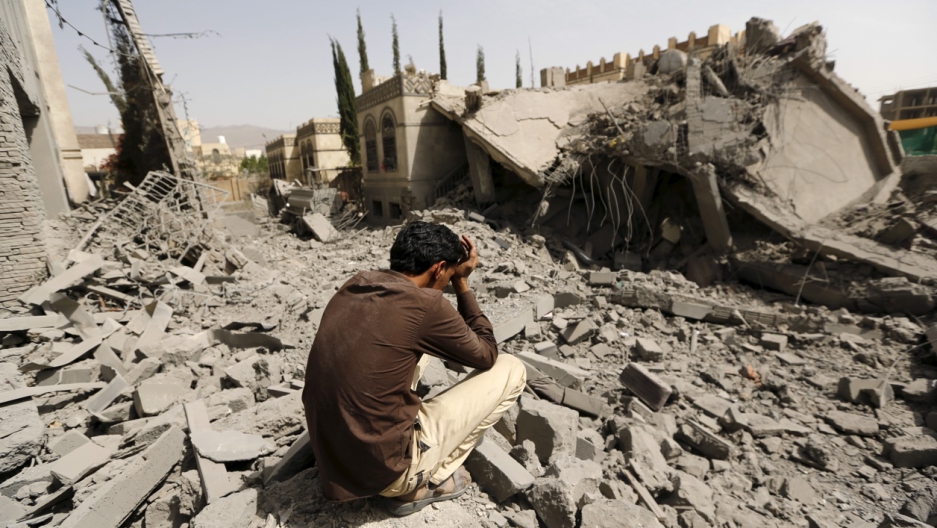 A man mourns the aftermath of a Saudi-led airstrike in Sanaa, the capital of Yemen, on June 15, 2015.
Share

A UN panel investigating possible war crimes by Saudi Arabia in Yemen has presented the UN Security Council with its findings. The report was leaked to The Guardian. It’s devastating.

Saudi Arabia began bombing Yemen in March 2015. Its stated goal is to push back the Houthi rebels, who managed to take the capital and force Yemen’s president to flee. The Yemeni president is friendly with Saudi Arabia. The Houthi rebels are aligned, at least loosely, with Iran.

Here is where it gets bad. The UN report, according to The Guardian, found that Saudi Arabia’s air campaign violated humanitarian law more than a hundred times over. The panel identified at least 119 sorties that struck civilian targets. And some of those sorties struck multiple targets.

In total, the UN panel said 146 civilian targets were bombed. It also documented “three alleged cases of civilians fleeing residential buildings and being chased and shot at by helicopters,” according to The Guardian.

Here’s a pretty revealing paragraph from the report: “The panel documented that the coalition had conducted airstrikes targeting civilians and civilian objects, in violation of international humanitarian law, including camps for internally displaced persons and refugees; civilian gatherings, including weddings; civilian vehicles, including buses; civilian residential areas; medical facilities; schools; mosques; markets, factories and food storage warehouses; and other essential civilian infrastructure, such as the airport in Sana’a, the port in Hudaydah and domestic transit routes.”

Members of the UN panel investigating Saudi Arabia’s role in Yemen were not able to actually go to Yemen. Their report was based on satellite imagery and reports from inside the country.

GlobalPost, however, spent about two weeks inside Yemen reporting on the impact of the Saudi campaign. The findings were no less brutal. GlobalPost correspondent Sharif Abdel Kouddous documented the alarming impact of the airstrikes on civilians — including interviews with survivors of a wedding party that was bombed, killing more than 40 innocent people.

Kouddous also investigated a quieter and ultimately more deadly tactic used now by Saudi Arabia: the blockade. That move actually had the approval of the UN Security Council.

Here’s the result: Food is now scarce and Yemenis everywhere are going hungry. Officials say the country is on the brink of famine. The blockade has also prevented deliveries of fuel, which inhibits the ability of Yemenis to travel — to hospitals, for example. It has also led to an energy crisis. Electricity is intermittent at best. Meanwhile, violence has displaced millions. For all these reasons, the economy has essentially collapsed.

Saudi Arabia says the blockade is preventing weapons from reaching the Houthis. But it is also preventing humanitarian aid from reaching Yemenis. The Houthis and their allies have set up their own blockades in areas they control, making the problem even worse.

Yemenis are being strangled to death by these circumstances. Every day that passes they lose more and more of the essentials: food, water, shelter, fuel and health care. Yemen has always been poor. It was one of the hungriest places on the planet even before the Saudis invaded. Now it is the world’s most dire humanitarian catastrophe.

So, there is apparently a fairly large group of people who believe the Earth is flat. They are called Flat Earthers. And they are completely serious. In support of their skepticism about the planet being round: Just ask yourself, they say, ‘Why is NASA part of the Department of Defense?'

While that is actually a perfectly reasonable question — in the context of arguing whether or not the Earth is flat, it is not even remotely reasonable. Yet, here we are debating something that has been accepted fact for some 500 years.

The debate has actually managed to worm its way into the mainstream thanks to a moderately popular rapper named B.o.B. In a new track he repeated his claims that the Earth is flat. He then took on celebrity scientist (yes, that’s a thing now, like celebrity chefs) Neil Degrasse Tyson. Tyson, of course, responded, which only made the story go more viral. You can read all the madness here.