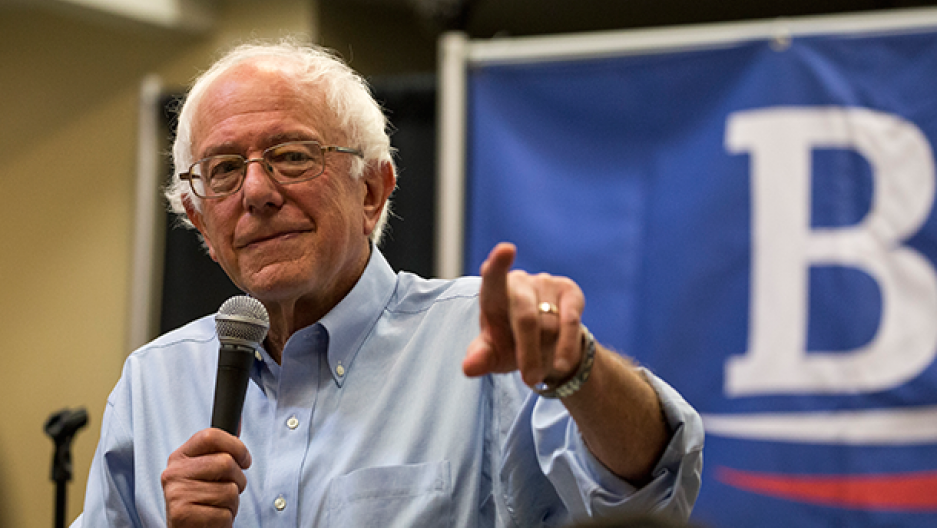 The much-talked about ad from Bernie Sanders is a visual montage set to Simon & Garfunkel's "America."

Have you seen this video? Of course it's a good ad, as advertising goes. It's a well-cut, imaginatively made swirl of positivity and enthusiasm showing Vermont Senator Bernie Sanders beaming amid his undeniably large rallies. The crowds show their love.

No words are spoken, no claims nor promises uttered. The visual montage of good feeling comes wrapped in Simon & Garfunkel's "America."

The internet loved the ad, and it quickly gained viral status on social media. "Gooosebumps," one commentator declared upon reviewing the work.

If you felt the same tingles or pangs watching that ad as you felt in 2008 watching a recently-obscure African-American senator tell the nation "Yes, we can!", you should have. As one of my more astute colleagues pointed out, the ad is designed to remind the mostly-white, mainly graying liberal voters of Iowa and New Hampshire what the idealism of the civil rights movement felt like and then again how the second hit felt when it was administered by then-Senator Barack Obama.

I should acknowledge here that I'm usually repelled by advertising in general, and political advertising in particular. Aside from being objectively annoying, it tends to distill policies and proposals down to emotional esters. Candidates' features and foibles are reflected with the fidelity of a funhouse mirror.

But that's my own problem to deal with. Advertising helps rule electoral politics. And once I've done my due diligence for The Takeaway, I, like you, have the power of switching it off. The problem with the Sanders ad, then, isn't that it substitutes emotion for substance, nor is it with what Sanders is proposing when he is proposing things.

It's that the legacy Sanders is claiming in it is that of candidate Obama, not President Obama. Many other commenters, and even the president himself, have pointed out the contrast between a soaring campaign and realities of governing. Obama as president, both out of necessity and choice, favored slow-moving, left-of-center incrementalism over liberal revolution.

Obama never tried for single-payer healthcare, nor even made a serious run at a public option in the Affordable Care Act. He opted instead for an individual insurance mandate policy spawned by conservatives a decade before.

Obama found his tax increases on the wealthy confined to many fewer of them than he wanted. He was brought carefully and haltingly to megaphone of public support for gay marriage rights. He backed Wall Street reforms that left the liberal wing of his party—including Sanders and Senator Elizabeth Warren—pounding their desks and warning of a continued climate of de-regulated greed.

In a way, this is Hillary Clinton's counterargument. That governing is hard, change is incremental, Republicans are tough, your enemies are real, and trench warfare is hell. Get what you can and survive.

"Campaign in poetry, govern in prose," is how Clinton put it at a candidates' forum in Iowa, attributing the quote to the late former governor of New York, Mario Cuomo. Of course she praised the ad itself, careful not to sourpuss the good vibes much of her audience was feeling as it replayed on monitors around the venue.

But any confluence between my argument and Clinton's here is coincidental. It says nothing about which of them can govern better, handle Congress better, or deal with Iran better. Instead, it says that Sanders' ad—as celebrated as it was—invoked the part of the Obama legacy that no one for or against him ever actually experienced in the real world.

Sanders did much better with an ad out Tuesday that, in addition to rolling soft music and sympathetic renderings of everyday Americans, argues for his platform: Universal healthcare, free college tuition, expanded social security, a raised minimum wage, and equal pay for women. Truth in advertising: That's what he's for!

Whether or not Sanders can reach for the horizon, bring throngs to the polls and achieve his goals, or whether the wiser path is Hillary Clinton's incrementalism is a substantive issue in the Democratic primary. But the fact that Sanders, Clinton, progressives internet-wide, and even a few grudging conservatives love the ad is an example of why it's to be dismissed.

The Sanders ad reminds voters how they felt about Obama when he himself was executing one of the greatest marketing campaigns modern politics has seen. But Sanders has insisted that he wants a campaign about substance, not personalities; about issues facing working people, and not crass politics. If so, Sanders should remind voters of what Obama did as president, what went right, what went wrong, what Hillary did right, what she did wrong, why she's bad, or why she's terrible, what he'd replicate and what he'd change.

Otherwise, you're just watching an ad for an ad.