Courtesy The Museum of Fine Arts.

It's a stunner, with a surprise behind it.

And now you can see it.

The very first painting that Frida Kahlo ever sold is now on display.

The Museum of Fine Arts, Boston announced that it is now home to the 20th century Mexican artist’s “Dos Mujeres (Salvadora y Herminia).” The 1928 painting is the only Kahlo painting to be acquired by a museum in New England.

The piece is a portrait depicting two childhood maids from Kahlo’s mother’s household, the Casa Azul (Blue House). It was one of Kahlo’s earliest works, created three years after a near-fatal bus accident left her with multiple injuries that would plague her the rest of her life. During her recovery Kahlo took up painting.

It may seem strange to imagine Kahlo, a socialist, surrounded by maids and other household staff. But Adriana Zavala, an professor of art history at Tufts University, says that was the norm at the time. Kahlo was very close with the domestic servants in her home and even painted a portrait of one of their children after they had died.

The way in which Kahlo painted "Dos Mujeres" is a good example of this closeness, she says.

"I think it's very self-consciously demonstrating to the viewers that these women are noble, that they have dignity and they they're worthy subjects for an artist to paint a beautiful portrait of."

Zavala —the author of multiple books about Kahlo — was one of the lucky few to see the painting before it was unveiled to the public on Wednesday. She said it was gorgeous, and unusually large by the artist's normal standards.

"It's really something you can sink your teeth into as you stand before it," she says.

Check out part of our conversation with Professor Zavala:

Born in 1907 in Mexico City, Kahlo is one of the most celebrated and revered artists in the world. Not a prolific artist during her time and haunted by illness, Kahlo created only about 200 paintings, including 55 self-portraits, and few of them exist outside of Mexico. She gained international fame after her death in 1954 at the age of 47.

Kahlo’s work is often categorized as surrealist, although she was reluctant to claim the label. She said her paintings were inspired by her reality, rather than dreams or the unconscious, like artists of that genre. Starkly autobiographical and emotionally raw, the themes and compositions of her work is influenced by indigenous Mexican culture, her passionate nationalism, communist views and have elements of Christianity and Judaism. 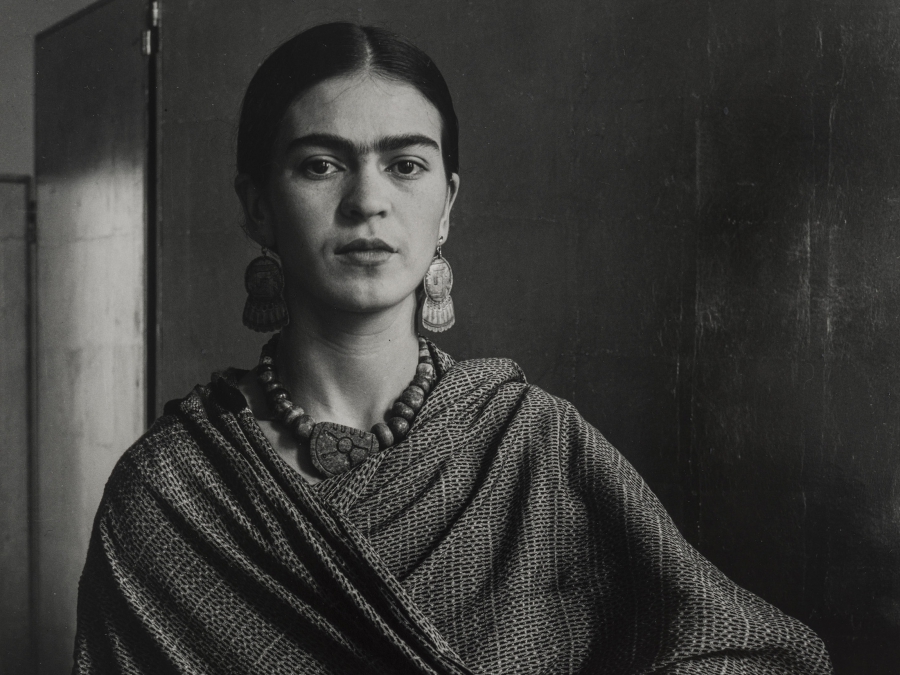 Courtesy The Museum of Fine Arts.

“Dos Mujeres” has been held privately in the United States since 1929, when it was purchased by industrialist Jackson Cole Phillips, who was a friend of Kahlo and her husband, muralist Diego Rivera. It has rarely been shown for public viewing.

The painting was acquired by the MFA in December.

Elliot Bostwick Davis, chair of the America’s Collection, was in New York for Latin American painting and American painting sales last November. While there, she met with art dealer Marianne Martin, who had in her possession “Dos Mujeres.”

Davis said she was astounded to see it — and even more astounded when Martin showed her what was on the back of the painting’s canvas.

The painting is inscribed with signatures from Kahlo, Rivera, Phillips and several others to celebrate the evening of its sale to Phillips, as well as a sentence: "En recuerdo de una noche muy agradable con la authora del cuadro," which translated means "In memory of a very pleasant evening with the author of this picture."

“I think it told such an incredible story, that I really knew that we had to have it,” said Davis. “It was in great shape, it was a compelling image, it was very beautiful.”

Davis then met with Matthew Teitelbaum, the Ann and Graham Gund Director at the MFA. The following week Teitelbaum saw the painting in New York and the painting was formally placed in the collection on Dec. 16.

“It was incredibly rapid for a museum generally,” said Davis.

The painting aids the MFA in its mandate to broaden the kinds of works the museum exhibits.

RELATED: How Frida Kahlo and Diego Rivera sang the praises of Detroit

“It really pushes our collection in a very new direction, reflects the work of an international artist, Frida Kahlo, really one of the greatest Latin American artists.” Davis also says the portrait is significant because it heroically illustrates two working women.

From the x-rays done by the museum's conservator Rhona MacBeth, it was discovered that Kahlo had originally drawn the two women with aprons. “But those have been removed in favor of really showing them in these simple dresses,” said Davis.

“It’s really an incredible work in terms so of how it speaks to our overall collection of American paintings and our overall Art of the America’s collections.”

Zavala says she may have removed the aprons to distance the women from the idea of domestic servitude. It also disproves a common understanding of Frida Kahlo's work, she says.

"This notion that she translated her life experience immediately to the canvas is myth," she says.

"She sketched underneath. She thought about what she was doing. She made choices. What I want people to undertstand as they sieze upon the extraordinary opportunity to go to the MFA from here forward and study this painting when it's on view, is to begin to back away from this psychographic understanding of Frida Kahlo, and to really think about her as an artist's artist, as an intellectual, as someone who was making choices that were both deeply felt emotionally, but also intellectually motivated. I think the under-painting, the under-drawing in this painting, is evidence of that."

Davis says Kahlo’s painting brings the Art of the America’s collection into the 20th century in a way that she hopes appeals to a diverse audience as the museum showcases a greater range of artists throughout the Americas.

“I couldn’t be happier for everyone here at the museum who helped. I’m also thrilled. It was really a large tribute to or new director’s enthusiasm and support that we were able to do it, and so many people in the museum are excited.”

RELATED: Frida Kahlo's letters sell at auction for $1,000 a page

Frida Kahlo, seated next to an agave plant, from a 1937 photo shoot for Vogue entitled "Señoras of Mexico".

Self-Portrait on the Borderline between Mexico and the United States, Frida Kahlo, 1932, oil on metal, Private Collection

“Dos Mujeres” debuted Wednesday and will be available for viewing until March 1 in a special presentation in the museum’s Carol Vance Wall Rotunda. After going through conservation treatment, the painting will be re-installed in the Art of the Americas Wing later in the year.

Courtesy of the Museum of Fine Arts Boston