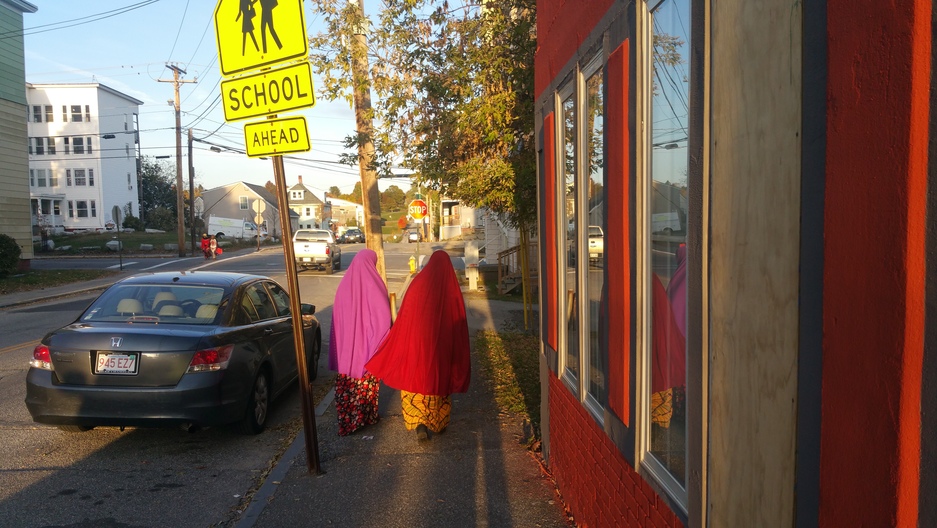 You can feel the tension in Lewiston, Maine. The working class city has faced closed textile mills, factories moving overseas and new immigrants, some in traditional Muslim dress, bumping up against white people who were born here.

“Folks are struggling in this community and they’re looking for someone to blame,” says Genevieve Lysen, a community organizer.

Part of Lysen’s work is with African refugees — some who now run businesses that have revitalized the city’s downtown. Paul LePage, Maine’s Tea Party-backed governor, has publicly suggested that federal assistance gives Somalis an unfair advantage.

“So when a leader like Governor LePage says that you’re poor because the Somali person living next to you isn’t, then you’re quick to blame your neighbor,” Lysen says.

Lewiston’s Mayor Robert MacDonald has also said government support for refugees must end — and that Somalis aren’t doing enough to integrate themselves in the city.

Fighting racism here unites Somalis. But cultural and historical differences linked to their home country divide them, too. Muhidin Libah is a leader of Lewiston's Bantu Somalis. They're descendant of 19th-century slaves in Somalia — and are physically and culturally distinct from what he calls regular or ethnic Somalis. Bantu Somalis started arriving in Lewiston about six years after the first wave of ethnic Somalis.

"If there are three Somalis sitting in a bar or in a café and a Somali Bantu person shows up, they will all stand up and leave," he explains. "So now we started having our own café. We start having our own shop. So, we’re doing our own thing."

Fatuma Ali and her family arrived into all this at age 9. She’s Bantu Somali and 19 now. Looking back, she says she knew she was seen a certain way by some Somalis.

"I hate to be labeled, but when people think of me as Bantu they look at me and they’re like, 'Hmm, she’s probably not going to go anywhere,'" she says.

But she did. Ali is now a nursing student at the University of Southern Maine. She’s the first in her family to go to college, and joins a growing number of young Bantu Somalis in Lewiston defying the poverty and prejudice that have followed them from Africa to America.

"It makes me very responsible," Ali says. "I have to be the responsible one, the one that brings things to the family. Basically I’m holding a very powerful seat in the house right now."

A map on the wall at the Tree Street Youth Center shows Somali and Somali-Bantu youth who've gone on to higher education.

Ali credits a local after-school initiative  called the Treet Street Youth Program for her success. The progam’s not intended as a substitute for home. But for some of the 150 kids that come through its doors each day, Tree Street is something close. Starting her freshman year, Ali came here after school every day to continue learning.

"I didn’t really know anything at all. I didn’t even know how to do my homework," Ali says. "They helped me and everything. They have Bates College students come over and help us with our homework and stuff."

Tree Street is where Ali says she caught the bug to become a nurse. But Tree Street doesn’t just focus on academics. It also prioritizes putting kids of different backgrounds in the same room. Julia Sleeper, who runs Tree Street, says ethnic Somali and Bantu Somali kids are encouraged to get along, and many do.

But getting to this point for young Bantu Somalis takes work, says Sleeper.

"It’s all part of them fleshing out, 'who am I now,' and we want them to know their old culture because they can’t make that connection of why that culture is even valuable here."

Libah worries about this — about young Bantu who feel isolated from other Somalis ditching their heritage and gravitating toward African American culture — including hip-hop — instead.

"Their pants are falling off. They have these funny hats. They have different kinds of jackets. All kinds of hip-hop culture. We share a lot of things. We share the hair, we share the nose. So they always think that’s the best fit for them."

"I mean I was mostly raised here, so obviously I’m into hip-hop and stuff. I know what they’re saying, Beyoncé and Rihanna."

But Ali, who wears a colorful hijab, says she reassures her parents that liking hip-hop doesn’t mean she’s any less Muslim — or Bantu.

Back at Tree Street, the doors have just opened for the day. A shy Bantu boy is already waiting outside. Volunteers are here too, including Ali — now helping other young Bantu navigate their identity in a new but divided city.