Flint residents pick up bottled water and water filters at a fire station in Flint, Michigan, January 13, 2016. The city's water is contaminated with lead, but many undocumented immigrants have not received help. They said water resource sites were requesting identification, which undocumented immigrants cannot get in Michigan.

"You know what? This is terrible. I'm going to do something about it."

It's not an uncommon feeling for people learning about what's happening in Flint, Michigan, these days. It was Aida Cuadrado's reaction last week. She's the director of Action of Greater Lansing, a network of churches that do faith-based community organizing.

Over the weekend, they took a large truck plus three SUVs full of bottled water to a member church in Flint, specifically to reach some 1,000 undocumented immigrants who have been affected by the high levels of lead in the city's water. 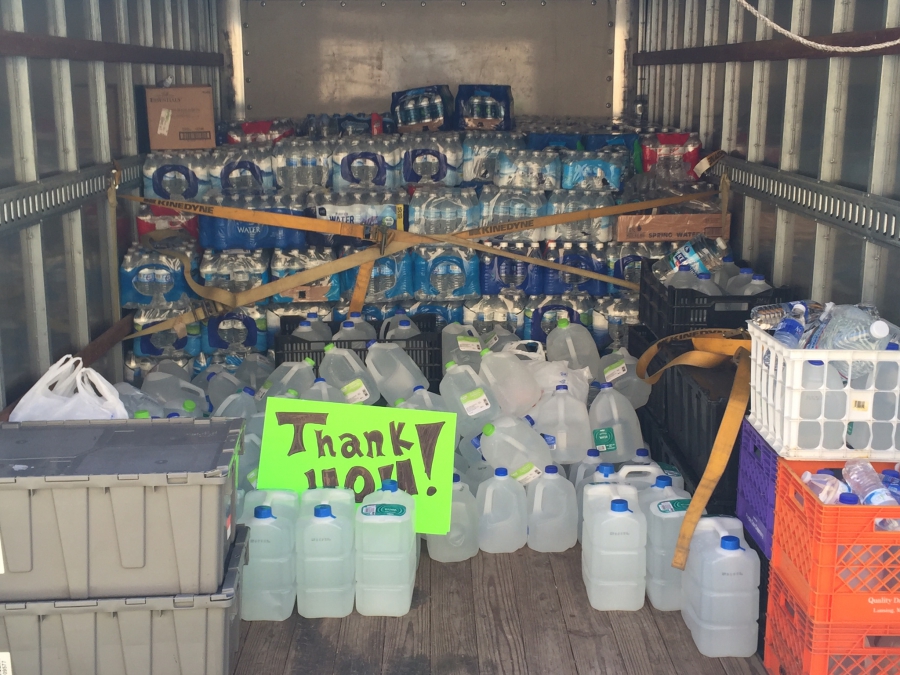 Congregations around Flint, Michigan donated water to help undocumented immigrants there cope with the emergency. Action of Greater Lansing made its first delivery by truck to a local church on Sunday.
Credit:

"There were some people who had the rashes [associated with lead poisoning]," Cuadrado says. She delivered the water to Our Lady of Guadalupe Catholic Church in Flint, which serves many immigrants there. "I met a few women who speak in English and Spanish telling me, 'I had no choice but to take a shower in this toxic water.'"

The Environmental Protection Agency is recommending that Flint residents only use bottled water or water run through special filters for drinking or cooking and physicians have expressed concerns about bathing small children and infants in the city's water. The city declared an emergency more than a month ago, though high levels of lead in the water were detected much earlier.

Last week, Cuadrado began to hear about undocumented immigrants who were still not getting bottled water and trying to boil their tap water — which does not actually remove lead. Part of the problem was that the resource centers were requiring driver's licenses or state identification cards before providing water. Undocumented immigrants in Michigan cannot get state-issued IDs. Undocumented immigrants have also been hesitant to open their doors to National Guard members delivering supplies door-to-door — for fear of deportation.

“I went to ask for water from the fire station, and they asked for my social security number, so I left,” Estella Arias, who is undocumented, told Fusion.

Michigan's embattled governor sent out a press release Friday that identification is not necessary to get water and supplies from the five fire stations that are designated water resource sites. But Cuadrado says that as late as Sunday, IDs were still being requested.

That made the work of the congregations and neighbors to reach these families all the more important. The truck, she says, was at its maximum weight, filled with donated water and some supplies, such as baby wipes.

"It felt like we were doing God's work on the way down there. That's what we're supposed to do as Americans. We show up."

High levels of lead intake can have irreversible effects. It affects the brain and nervous system and is especially dangerous for children and and unborn children.

"I'm angry and I'm hoping that someone will be held accountable for what's happened," says Cuadrado. "It's terrible, there's no other word for it." 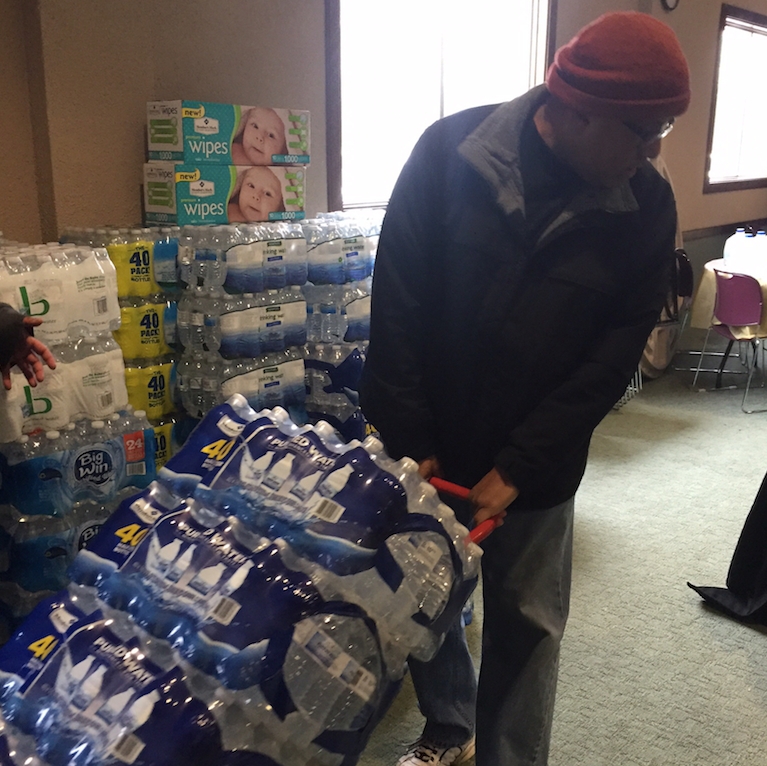 A volunteer for Action of Greater Lansing hauls donated water to get to undocumented immigrants in Flint, Michigan, where high lead levels have made the city's water unsafe to drink.

If you would like to help, Cuadrado says the most efficient way right now is to donate money so that organizations like hers can buy and distribute discounted crates of water efficiently. You can donate to Action of Greater Lansing via their website, and use the memo "Flint water." "We will get it to undocumented immigrants. We give you our word on that," says Cuadrado. If you are in the Flint area, you can find other ways to get involved by emailing actionofgreaterlansing@gmail.com.

For more general giving to Flint, check out the Community Foundation for Greater Flint and the Food Bank of Eastern Michigan.

In Flint, Michigan, a crisis over lead levels in tap water