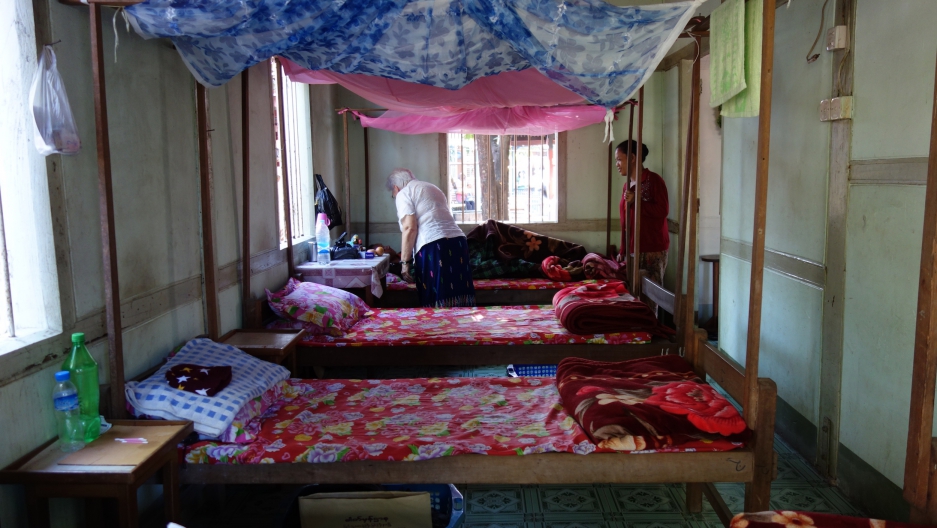 A dorm at the Hope Center.
Credit: Matt Alesevich
Share

MYITKYINA, Myanmar — A week after Myanmar's historic Nov. 8 elections, a white jeep bounces up the dusty horseshoe-shaped driveway of a YMCA hostel in Myitkyina, capital of the conflicted Kachin State.

The driver's-side window rolls down, and a white-haired head pops out.

“I wish you could have seen what I just saw,” says the woman, in an Irish accent. “A[n HIV-] positive baby — not a week old. The mother wants nothing to do with her. [The baby's] probably not gonna make it, and [the mother] don't even care.”

The voice belongs to Sister Mary Dillon, a 70-year-old Catholic nun from Ireland who's been caring for people in Kachin infected with HIV and AIDS for over a decade. Just like the region, she's no stranger to poverty, death and disease. 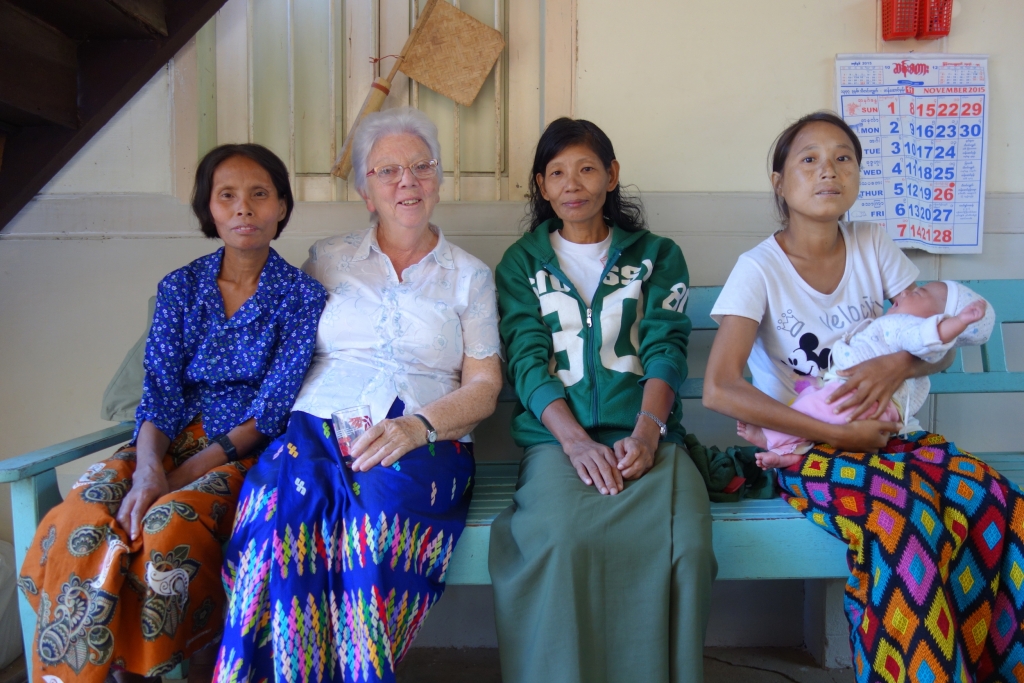 Sister Mary Dillon and residents outside the Hope Center.

Since Myanmar's elections, which yielded landslide gains for the National League of Democracy party, world news headlines have boasted of “democracy” coming to the “Burmese.”

Yet in a country with a military-favored parliament and over 100 ethnic groups, a handful still in armed conflict with the military, each of these terms comes with footnotes. One of the lengthiest belongs to the Kachin people.

An ethnic minority group in Myanmar's northernmost state that makes up just 1.5 percent of the country's population, the Kachin have sought autonomy through armed struggle since the early 1960s. In October the Kachin Independence Organization, which represents the rebels, was one of several groups to turn down a government ceasefire offer.

Due to the conflict, which has displaced more than 100,000, Myitkyina is home to around 40 camps for internally displaced people (IDPs). White jeeps belonging to international aid organizations like the UN are common sights on city streets.

Among these polished vehicles of big-money aid rides another jeep with origins considerably more humble.

Since 2005, Sister Mary has run Myitkyina's Hope Center, a shelter for impoverished people with AIDS and HIV. The home currently provides care and medicine to 77 people aged 1 to 54 and employs six HIV-positive staff. Next to an IDP camp, it stands around 40 miles from the state’s conflict zone.

Approximately 520 people, the majority between 25 and 35, come through the home every year. All are allowed to stay as long as they take their respective medications. 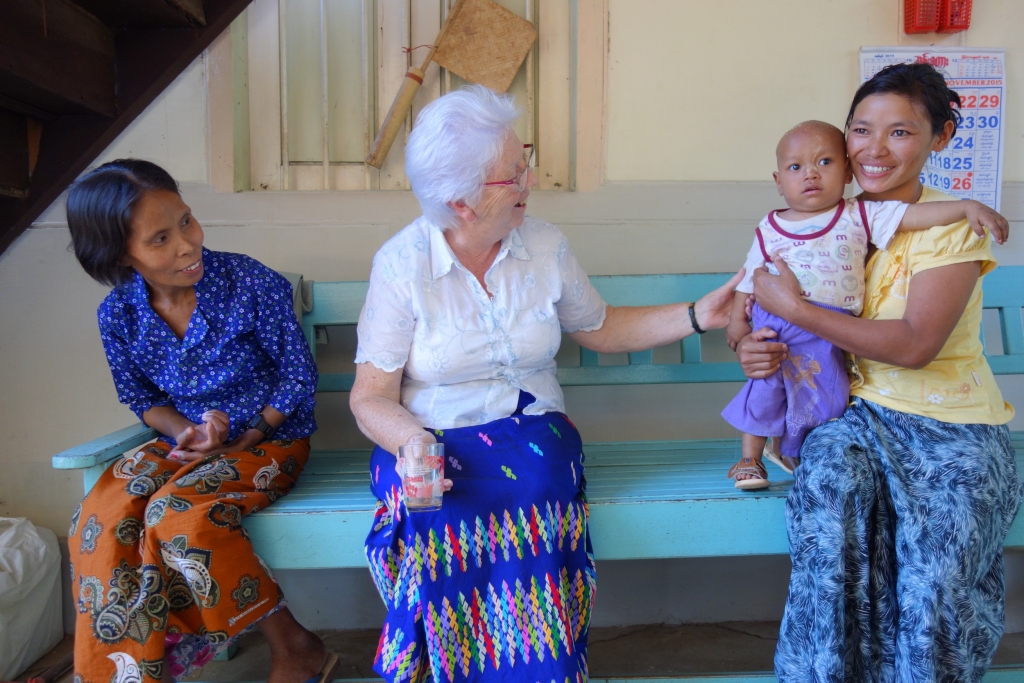 Sister Mary with one of her youngest residents, a 19-month-old child.

A disheartening array of health and drug stats speak to a perfect storm in Kachin State. Of all the nations in the world, Myanmar puts the lowest percentage of its GDP toward health care — 1.8 percent — and AIDS-awareness education is at virtually zero.

The country is also the second biggest producer of the world's opium, with cultivation concentrated in Kachin and the bordering Shan State. High rates of drug addiction among Kachin youths — up to 80 percent, according to one estimate — and heroin that sells for around $1 a hit also fuel the fire.

“Until 2007, everyone was dying because no NGO was giving out medicine,” says Sister Mary, who's now supplied with HIV-controlling antiretroviral drugs through the Global Fund. Other international aid organizations also provide support.

More from GlobalPost: Heroin use is so high in Myanmar that syringes now serve as currency

The Burmese government, infamous for harassing foreigners and assigning secret police to monitor aid workers, offers no assistance. It does, however, allow Sister Mary to operate unmolested — less out of appreciation for her work than for the “out of sight, out of mind” quarantine she provides.

“No government official has ever come in here,” says Sister Mary. “They don't know [what goes on at the Hope Center], and they don't care.”

To keep the home as judgment-free as possible, she's adopted a “don't ask, don't tell” policy of her own.

“We don't ask questions here. This is not a hospital. This is a home where people who are discriminated [against] are welcome,” says Sister Mary. “Whether you are KIA [Kachin Independence Army] or Burmese army or Christian or Buddhist, we are all one here.”

Her philosophy is a welcome beacon for residents, many with long histories of abuse, addiction, prostitution or abandonment. 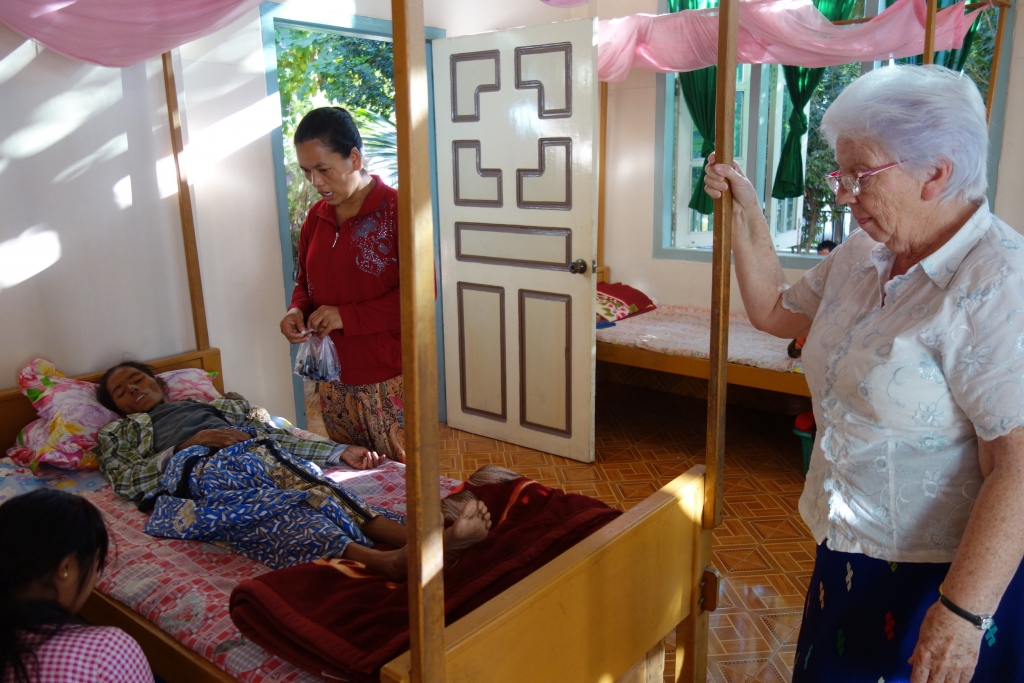 One resident, a skeletal-looking 38-year-old named Ohn Kyaing, recently took out a $500 loan to bribe her abusive husband to leave the family’s village indefinitely. Barely able to move, she relies on her 21-year-old daughter to do farm work to repay the loan. When Ohn Kyaing's health worsened, she and her daughter saw a pilgrimage to Sister Mary as their only hope.

“It took two days to get here by train,” says Ohn Kyaing from a bed at the Hope Center. “I couldn't stand. I couldn't walk. I was carried off the train by men.”

As with any residence of its kind, death is never far away. More than 150 residents have been buried in unmarked graves at a nearby cemetery. Aiming to ensure that every passing patient dies with dignity, each of the home's deceased receives a full funeral service, covered in total by a local actor-philanthropist.

“I attend every funeral,” says Sister Mary. “I want to set an example for the community that you respect [those dying of AIDS].” 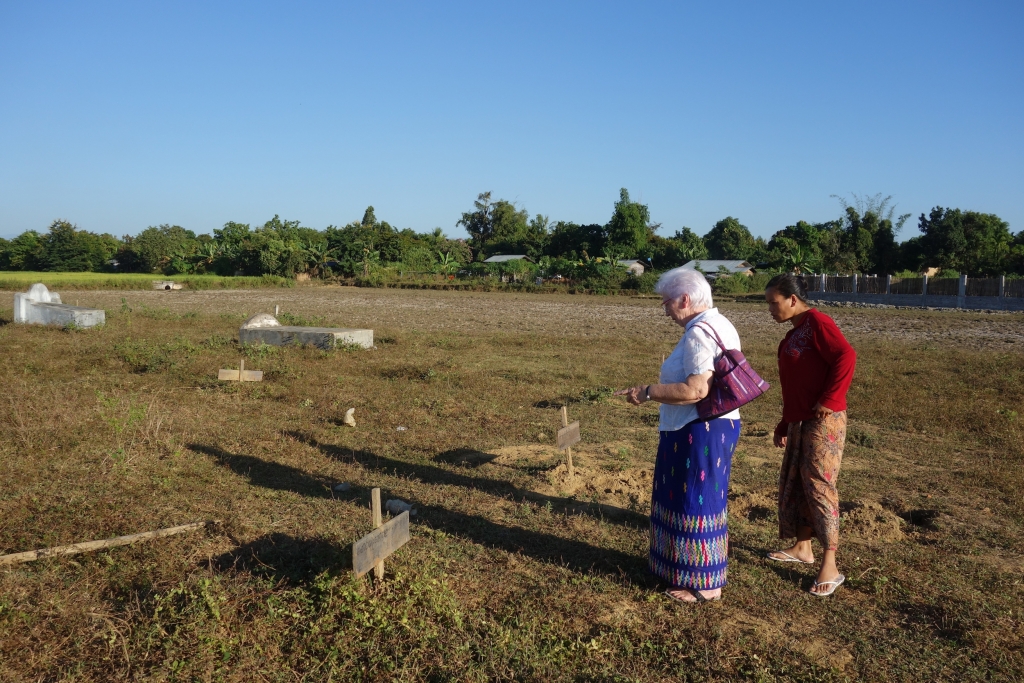 The cemetery where the Hope Center's late residents are buried.

Good intentions aside, a decade in the eye of Kachin State's HIV and AIDS epidemic has left the nun accepting of the harsh realities that accompany her life's work.

“No one's ever going to come back to visit here,” says Sister Mary, walking along the nameless graves of those once under her care. “This ain't no Arlington.”