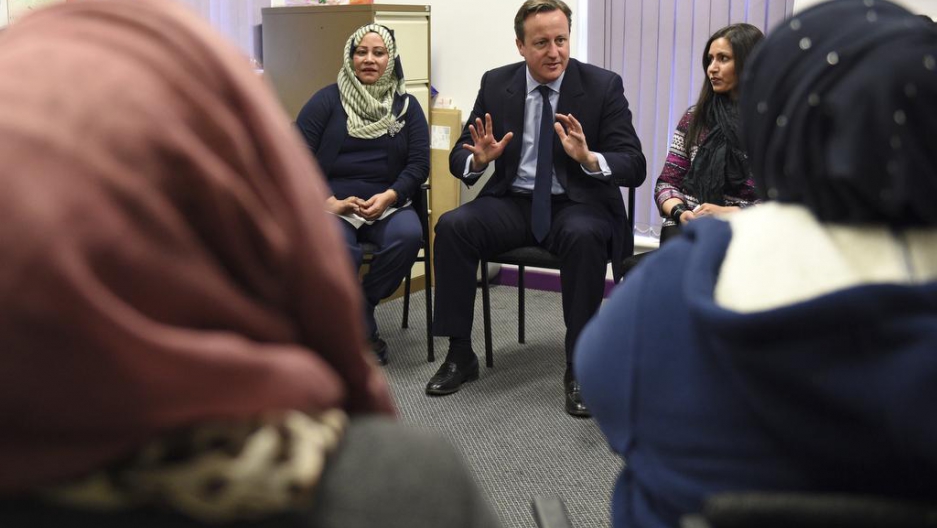 UK Prime Minister David Cameron speaks with women attending an English language class during a visit to the Shantona Women's Centre in Leeds, Britain, on Jan. 18, 2016.

After media reported that the British prime minister had spoken in a private conversation about the "traditional submissiveness" of Muslim women, he was set straight by a large group of very smart — and sarcastic — women of the Islamic faith.

Using the hashtag #TraditionallySubmissive, tens of thousands of Muslim women of all ages have tweeted their professional and educational achievements, many alongside photos of themselves, in a sharp rebuke of the British leader's remarks.

I am intelligent, articulate, opinionated, capable, adaptable & I can even make a decent souffle. What I am NOT is #TraditionallySubmissive

Submissive is most definitely not the word I'd choose @David_Cameron. #TraditionallySubmissive pic.twitter.com/DptxsiVF6Z

Muslim women are not a problem that needs solving. #TraditionallySubmissive @David_Cameron pic.twitter.com/6IcG3cZSth

my mom was so #TraditionallySubmissive she left home to go to med school in 1960s Pakistan. thanks to her, i'm a journalist and a professor.

"I personally prefer the ones from our slightly older generation, because I think it completely smashes the stereotypes apart," says Zaynab Mirza, who was one of the first people to use the hashtag. "I know David Cameron's comments were probably referring to the second- or third-generation, or women who I assume are young mothers right now. However the elder generation has absolutely smashed apart the stereotypes."

Mirza says she and her colleagues have been in awe of the older women who are responding because of the breadth of their experiences. They've learned multiple languages in addition to being mothers and grandmothers, and taken on extensive courses of study as well.

Mirza says she's definitely had the label of "oppressed Muslim woman" applied to her. She wears a headscarf, and says she's had to explain that wearing one is an empowering choice she made, rather than a choice her family made for her.

Shelina Janmohamed, the activist author of "Love in a Headscarf," launched the social media campaign after reading Cameron’s remarks, first reported by The Telegraph last week, that the "traditional submissiveness of Muslim women" prevented them from acting as moderating influences on young Muslim men who might become radicalized.

"My heart just sank when I saw the headlines," Janmohamed told the BBC.

"It's just making things harder for Muslim women. That's just one stereotype about Muslim women, it's not how we all are. We are vibrant, diverse, we're talented and we have opinions. The prime minister is always saying we need to take up British values, so I responded in the most British way I could — with sarcasm."

It wasn’t just Cameron’s remarks about submissiveness that riled these highly educated and capable Muslim women.

It was also his plan to spend $28 million (£20 million) to help 190,000 Muslim women improve their English language skills so they could better integrate into British society, and avoid what his office's press release called "a slide toward radicalization and extremism."

"We will now say if you don't improve your fluency, that could affect your ability to stay in the UK," Cameron said.

"All too often, because of what I would call 'passive tolerance,' people subscribe to the flawed idea of separate development. It is time to change our approach. We will never truly build One Nation unless we are more assertive about our liberal values, more clear about the expectations we place on those who come to live here and build our country together and more creative and generous in the work we do to break down barriers."

Perhaps the money would be better spent teaching Cameron and his advisers about British Muslim women in the 21st century.

The findings of a recent study of Muslim women in Britain “squarely challenges prevalent images of women from Muslim communities as passive, subdued and subordinated through evidence of their autonomisation and capacity of action,” said Daniele Joly, a professor emeritus in the Department of Sociology at the University of Warwick and author of the study "Women from Muslim Communities: Autonomy and Capacity of Action" published by British journal Sociology this month.

While women interviewed for the study had experienced discrimination, they also emphasized "the support they had enjoyed from British society" and "all agreed that the situation had much improved over the last 20 years," wrote Joly.

Muslim "women’s aspirations themselves had changed as a consequence of living in Britain because their horizon had expanded beyond marriage and family ... They generally recognized that living in British society granted them greater opportunities as women."

It might be time for Cameron to get to know them.

This story is crossposted from our colleagues at GlobalPost. Kierran Petersen from PRI's The World contributed to this story.

An earlier version of this story misspelled Zaynab Mirza's name. We regret this error.