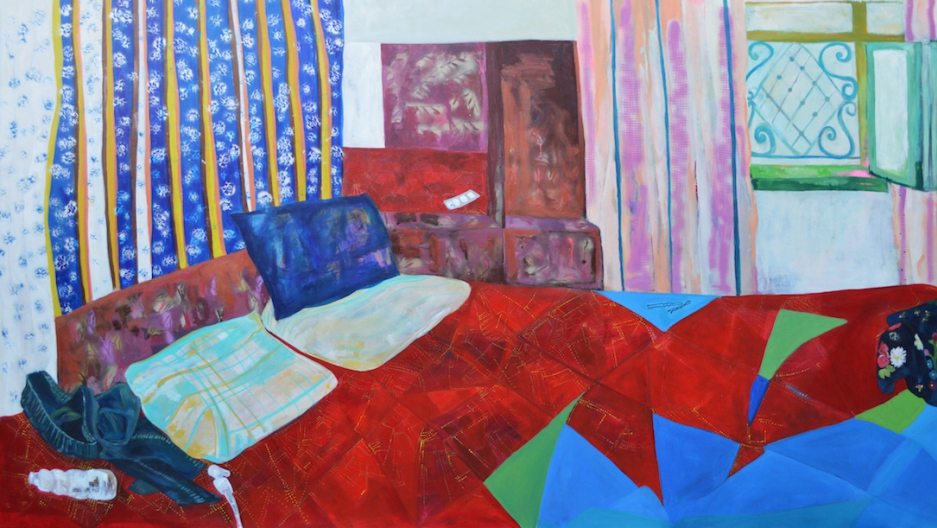 Rana Samara says she became interested in painting intimate scenes, post-sex, after visiting a friend in a Palestinian refugee camp where there's little privacy. "I started questioning like, how did people make sex? How did they sleep together?”

It’s a bold departure from the usual Palestinian artistic tropes — the olive trees of the West Bank, the trappings of traditional Palestinian heritage, the scenes of exile, war and Israeli military occupation.

“We have a lot of Palestinian artists that work on the Palestinian struggle ... but Rana’s works are different,” said Ziad Anani, owner of Zawyeh Gallery in Ramallah, where Samara’s paintings are receiving their first professional exhibition. “She likes the intimate space.”

Samara, a 30-year-old mother of three and a recent graduate of the International Academy of Art Palestine in Ramallah, paints in the style of Matisse or David Hockney — big colorful still-life portraits. In one, an orange peel has fallen on the floor next to the bed, and underwear hangs from the bedpost.

Samara, who’s based in Ramallah, became interested in scenes of intimacy as a second-year art student, after she visited a friend living in a West Bank refugee camp.

“I stopped in the front of the camp and I started questioning like, how did people make sex? How did they sleep together?” Samara said.

There’s very little privacy in West Bank refugee camps, crowded concrete shantytowns where Palestinians ended up after they were uprooted from their homes in the 1948 war that led to Israel’s founding.

“Then I started to meet women in the camp and ask them the question, how did you sleep with your husband? It’s a horrible space, because the buildings (are) next to each other,” Samara said. “One woman told me that her husband put his hand in her mouth to keep her voice down.”

She interviewed women in refugee camps and elsewhere in the West Bank about marital intimacy. Some women would invite her to come to their homes after they had slept with their partners; Samara would take photographs of the room as inspiration for her paintings.

One painting shows a pack of Viagra in the corner. In another one, she painted the patterns from the lingerie of a woman she interviewed.

Some of her Palestinian artist colleagues tell her she should be painting about more crucial things, like the Israeli separation barrier in the West Bank, she said.

“Many artists, like, give you critique. ‘You are a woman. Why do you want to talk about sex? We are Palestinians. ... Sex, I think, it’s last thing we should talk about.’ Why? Why [is it] not an issue?” Samara said. “Yeah, it’s an issue. We can talk about it. But I think I talk about it in a polite way. Not in a very rude way.”

While Samara is breaking taboos as a Palestinian female artist dealing with such intimate subject matter, it did not seem to faze people at the opening at Zawyeh Gallery. It’s the first of three contemporary art galleries to be established in the West Bank in the past few years, part of a growing effort to market Palestinian artists to collectors in the West Bank and around the world. The works of other established and emerging local artists are on exhibit at the gallery, too.

It was an impressive turnout at the opening. Among those there were Palestinian politician Hanan Ashrawi and a prominent Palestinian businessman and his wife who are contemporary art collectors. There were pastries and wine.

Another artist, Juhaina Habibi Kandalaft, exhibited paintings featuring women in traditional embroidered dress. Her works reflect Palestinian pride and nostalgia for the past. Kandalaft was born in Nazareth, in what is today Israel, in 1947, one year before Palestinians were expelled or fled in the war that led to Israel’s establishment.

Her works feature a more traditional depiction of Palestinian women, but she approved of Samara’s more intimate portraits. “It is not necessary always to talk about Palestinian core issues,” she said. “Palestinians have to talk about life as well.”

Samara said she has been accepted to a master's of fine arts program at the California Institute of the Arts, and is trying to raise funds to pay for it. Her dream is to exhibit her work at the Venice Biennale, the Olympics of the art world, as the official Palestinian representative.