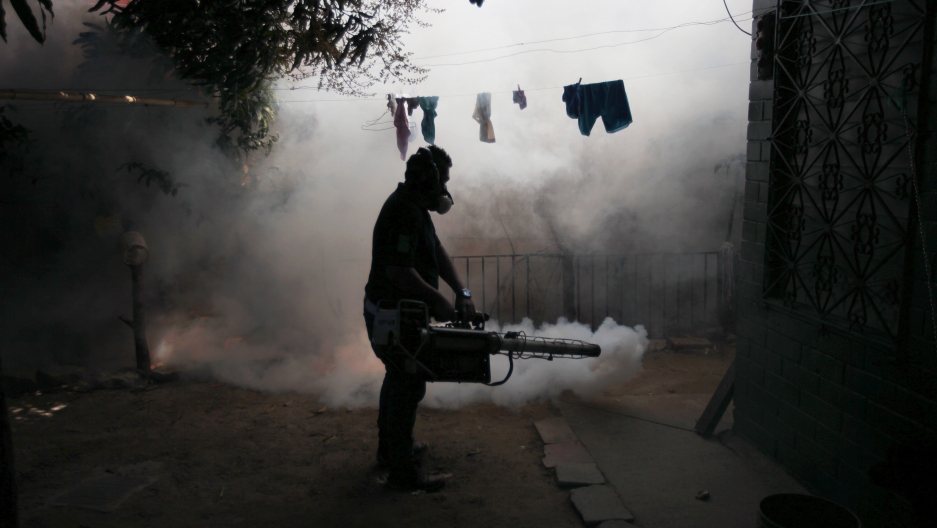 A health worker fumigates the Altos del Cerro neighbourhood as part of preventive measures against the Zika virus and other mosquito-borne diseases in Soyapango, El Salvador.

A number of countries in Latin America and the Caribbean are racing to respond to the rapid spread of the Zika virus. But El Salvador has gone further than its neighbors by advising women across the country to not get pregnant until 2018.

Zika is a mosquito-borne illness that can be transmitted from a pregnant mother to her baby. There is no vaccine to prevent infection or medicine to treat Zika, but generally, the symptoms are relatively mild, and include a fever and some muscle aches.

But after a number of prominent deaths, and a possible tie to microcephaly and paralysis, people are taking the virus much more seriously. The CDC has been steadily adding countries to its travel warning related to Zika, and specifically advising pregnant women to be cautious.

And critics — including many women’s rights advocates — are saying the recommendation is unrealistic.

“This is a case of a public health crisis colliding with a very strong legal and cultural controversy…This is obviously going to be extremely difficult in Latin American countries, including El Salvador,” says BBC reporter Luis Fajardo. “There are very high rates of unplanned pregnancies in most other countries. Even in the US, the planned pregnancy rate is somewhere around 50 percent.”

And women who find themselves facing unplanned pregnancies in El Salvador don't have many options.

El Salvador has one of the most restrictive abortion laws on the continent. There are essentially no legal avenues to get an abortion — even in cases of rape, incest or danger to the woman’s life. Between 2000 and 2011, Fajardo says, 129 women were sentenced for abotion-related crimes. A few of them are even facing murder charges, he says. On top of that, there are reports of women being put in prison for miscarrying.

Fajardo says that in this context, many women's rights advocates see this pregnancy recommendation as "wishful thinking" and say they're seeing this as the time to change the country's abortion laws. But there's no indication that the government is considering changing anything.

Women in El Salvador aren't supposed to have babies until 2018 because of #ZikaVirus. So will the government stop jailing them for abortion?

"The women's rights activists are saying that this is an untenable situation, and maybe that this heath crisis could create an opening for at least discussion of the issue in the political arena in El Salvador," the BBC's Fajardo says.