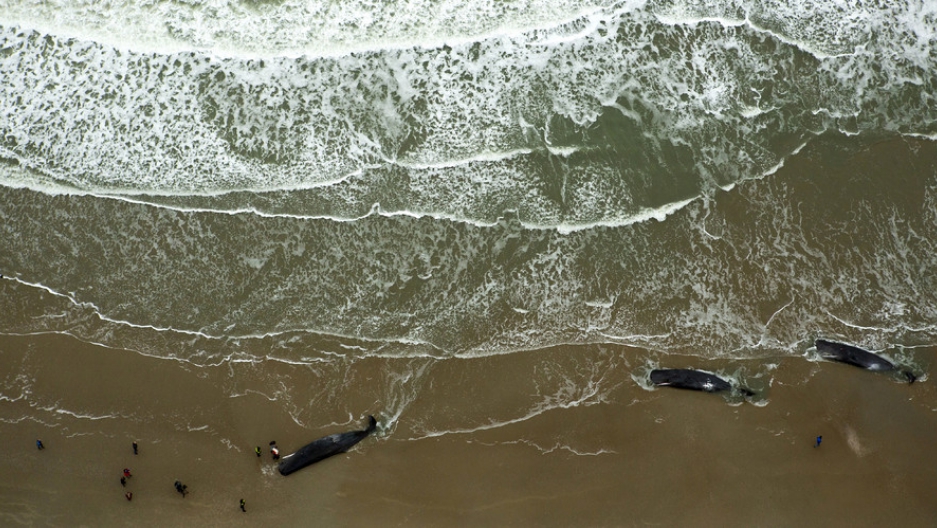 Dead sperm whales are seen on a beach off the coast of the Netherlands, January 13, 2016.

Whales face many known hazards, from harpoons to fishing nets to boat propellers. But what’s causing the largest mass stranding ever seen of sperm whales in the North Sea? Four sperm whales washed up on two beaches along England's North Sea coast. Twelve others were found dead on beaches off the coast of Netherlands last week.

“I suppose the quick answer is we don’t know,” says Andrew Brownlow, from the Scottish Marine Animal Stranding Scheme. He recently joined a team of veterinary and marine scientists to perform post mortems on some sperm whales that were stranded and died on the Wadden Islands, an archipelago off the coast of the Netherlands, Germany and Denmark.

“The reasons that cetaceans strand is a mystery, and it’s one that we’ve been looking at for decades,” says Brownlow.

Scientists do understand some of the many variables that are hazardous to whales, “It can be exposure to sound, it can be exposure to toxins in the marine environment, it can be because they’re injured in some way, they’ve been hit by something, sometimes it can just be because they’re in the wrong place, their navigation hasn’t worked and they’ve come into an area that has a very high tidal range, or it can be something new.”

Is it sound? "There are valid concerns that we are making the oceans noisier, which makes it harder for whales to navigate," he says. "However, it's likely the increase is because there are more whales, because of the embargo on whaling over the past 30 years."

But then again, with the recent North Sea strandings, it may be the structure of the undersea area of the southern North Sea that's the culprit.

“It’s a really bad place for these animals to be. Fundamentally it’s too shallow, around 150 feet deep, often shallower than that. This is a species that exists off of deep ocean trenches, dives as deep as 6,000 feet down to be able to forage. They navigate, communicate using acoustic clicks and we think in this very shallow environment that’s got very acoustically absorbing material like lots of sand and silt, they can’t navigate or communicate very well.”

Another theory is that sperm whales follow their prey, squid, but then end up in the southern North Sea which Brownlow says functions like a “whale trap. Once they get in there it’s very difficult to extricate themselves and get back out again.”

Brownlow compares their disorientation to humans trying to find our way through a dense forest in thick fog, “You can see the trees that are immediately close to you but you don’t get a feeling for the landscape, and I suspect that played a role here.”

Members of the SMASS team are on their way to give the Dutch scheme a hand with a mass stranding event (MSE)... https://t.co/3tqRNEb59u

Brownlow has joined up with scientists from Belgium and the Netherlands to study the latest surge in sperm whale strandings.

”We need to investigate this in detail because it could be a bad news story in the sense that it could be to do with what we as a civilization are doing to the marine environment as a whole and not just to these very charismatic sperm whales.”