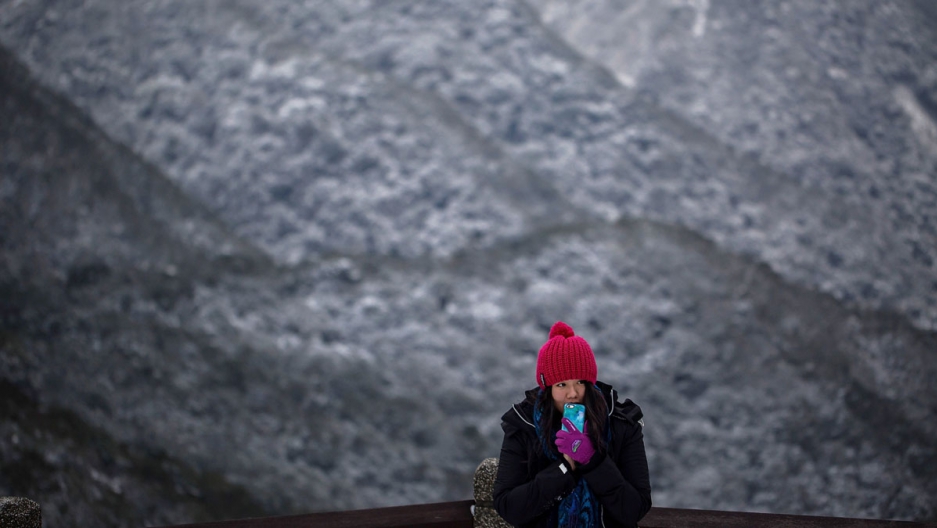 A woman takes photographs as snow is seen at the background on the Yangmungshan National Park during a snowfall in Taipei, Taiwan. Taiwan experienced a sudden drop in temperature over the weekend.

Frigid temps, lots of snow and a big dig-out.

It's been a rough past few days on America's East Coast. People lost their lives in the storm.

Now, as bad as this latest storm has been; let's just remember that we get hammered with cold weather each winter. So at least we're used to seeing our breath when we walk outside.

Not so for residents of Taipei, the capital of Taiwan. They're in the midst of a once-in-a-generation winter.

"Not only am I wearing a coat and boots outside, I'm actually wearing a down jacket and several layers in my home and two pairs of socks and I'm still cold," says Cindy Sui with our partners at the BBC. "Most offices and homes in Taiwan do not have indoor heating because, generally, the island doesn't see this kind of cold."

There's no way to warm up it seems. Some people are getting by with space heaters. But they don't work all that well, and if neglected, can be fire hazards.

Snow, thankfully, isn't that big of an issue. The mountains have seen a couple inches, attracting visitors. They play in it, build snowmen and toss snowballs.

The cities are mostly clear. And that's where the death tolls are piling up. At least 57 have died due to the cold weather. Sui says the temperatures dropped suddenly, going from 61 degrees to about 40 degrees.

Elderly people had a difficult time coping with it on their own. Sui says it speaks to social change on the island.

"So we're not seeing this traditional Taiwanese family where you have three generations under one roof. Now, a lot of elderly live by themselves. They're not looked after by family members," she says.

These cold fronts only happen every 44 years or so. And hopefully, Taiwan will be better prepared for the next time it hits.

Until then, it's parkas and wool caps for pajamas.