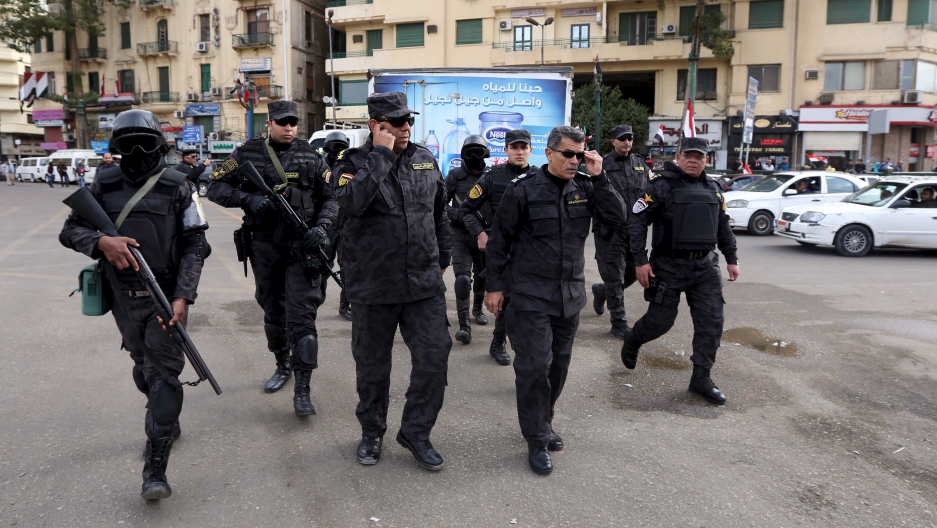 Egyptian police made a show of force in Cairo’s iconic Tahrir Square on January 25, 2016, as small pro-government demonstrations took place on the fifth anniversary of the uprising that toppled former dictator, Hosni Mubarak.

On the fifth anniversary of the January 25th uprising that toppled longtime Egyptian dictator Hosni Mubarak, protesters gathered in Cairo’s iconic Tahrir Square. Only this time, they were chanting in support of their ex-army-general-turned-president, Abdel Fattah al-Sisi.

And unlike the massive demonstrations that erupted in early 2011, these protesters were small in number, with only a few dozen people taking part.

“The reality is that there’s been a very strong intimidation campaign in the run-up to this day, to prevent any protesters from coming out to commemorate the anniversary,” says Heba Morayef of the Egyptian Initiative for Personal Rights.

No one was planning any large scale protests for this anniversary, Morayef says. But the Egyptian security forces were not taking any chances.

“There [were] widespread raids of downtown apartments of young activists, arrests, and a general mood of hysteria,” she says.

The Sisi government has not attempted to embrace the symbolism of the January 25th uprising that once captivated so much of the Egyptian public, along with people around the world.

“This is a regime that oversaw mass killings in the summer of 2013 for which not a single police officer has been investigated,” Morayef says. The government under Sisi, “has not felt the need to pretend to care about the rights and freedoms outlined in the Egyptian constitution, for example,” she adds.

Restoring public order is what the Egyptian government likes to talk about, not the values of the January 25th movement, which called for reforms of the police, political system and economy.

“All of that is being forgotten and being erased by the brute force of the security agencies,” Morayef says.

Most of the people who distinguished themselves as protest leaders back in 2011 are now either in jail, or in exile. That goes for Islamists from the Muslim Brotherhood and some of the most prominent secular, leftist protest organizers from groups like the April 6th Youth Movement.

“It’s no coincidence that they’ve been kept behind bars and, sadly, are probably likely to remain so for the near future,” Morayef says.

Unlike during the Mubarak era, the Sisi government has taken a uncompromising approach toward the outlawed Muslim Brotherhood organization. Whereas Mubarak gave the Brotherhood some leeway to function as an underground political movement, the current regime is taking steps to eradicate the Brotherhood as a political player altogether.

Since the ouster of the ex-Brotherhood leader, Mohammad Morsi in 2013, Egyptian authorities have put numerous Islamist leaders on trial, sentenced many of them to death, and sent a general message that the group will never again be allowed to return to the political stage.

“We’ve seen no sign of any scaling down of that repression,” Morayef says, nor any sign that the government might be willing to reach a political accommodation with the Muslim Brotherhood anytime soon.

Overall, Morayef doesn’t have much good news to report when it comes to human rights in Egypt.

“It’s tragic irony that we are today in a much worse situation than we were in 2010, in the lead-up to the uprising. During the last decade of Mubarak, the human rights community was left alone with periodic harassment,” Morayef says.

“Mubarak didn’t take opposition very seriously, so he kind of left us a gray zone within which to operate. And that gray zone no longer exists today.”