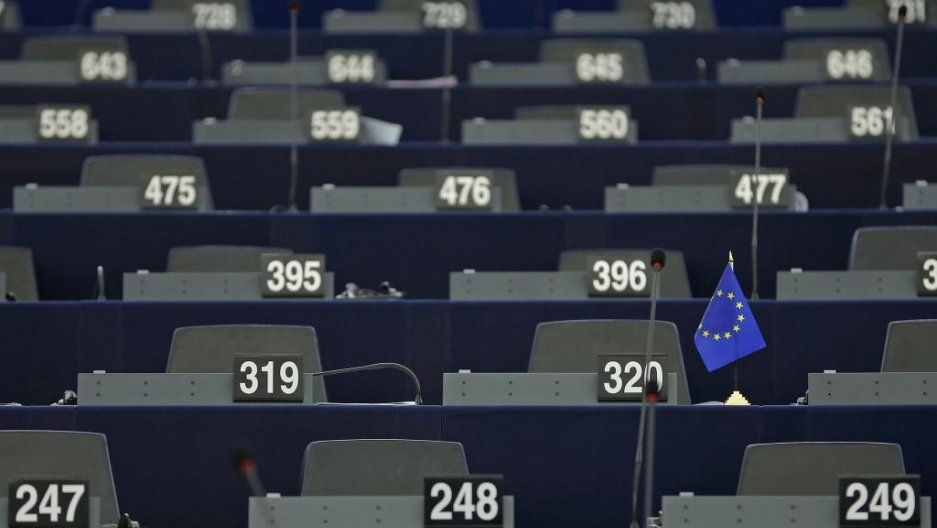 Candidates' campaign posters were still smiling down on villages across rural Spain weeks after national elections on Dec. 20.

Their longevity probably wasn’t meant to send a message. But it’s fitting they’re still up, since Spaniards may soon have to vote all over again.

The election produced no winning majority. And a month of negotiations has left none of the 10 parties represented in parliament able to forge a governing coalition.

Angered by years of economic stagnation or government graft, worried by immigration and fearful of terrorism, voters are rejecting traditional, centrist politicians.

As a result, Europe's democracies are looking dangerously dysfunctional — and some of them are verging on despotic. Thousands of people protest against the economic policies of the Spanish government during May Day demonstrations in the center of Madrid on May 1, 2012. Protesters massed across the country, venting anger over austerity, job reforms and an unemployment rate topping 24 percent.

In Spain, the election brought heavy losses for both the conservative People's Party and the center-left Socialists, who have alternated in power since the country emerged from dictatorship in the 1970s.

New forces surged — spearheaded by a youthful far-left party called We Can that captured 69 seats in Congress — on promises to roll back austerity and create jobs in a country where almost half the young people are unemployed.

Outgoing Prime Minister Mariano Rajoy, whose conservatives came first in the election, on Friday gave up his attempts to form a coalition. The main leftist leaders spent the weekend squabbling with each other.

Still, no obvious coalition of either the left, right or center looks possible, but King Felipe VI is trying to find a solution.

"We must continue moving forward with the willingness to cooperate and the spirit of togetherness," he told the nation in a year-end address. The monarch appealed for "politics based on dialogue, agreement and compromise."

New forces surged on promises to roll back austerity and create jobs in a country where almost half the young people are unemployed.

Without it, voters will be called back to the polls — in the hope that this time they produce a clear winner. Greece last year endured two parliamentary elections, a divisive referendum and months of political crisis. It's now run by an unlikely coalition of the radical left and nationalist right. Support for the government is slumping, and protests by farmers and civil servants last Thursday may herald a new wave of anti-austerity unrest.

A poll this month showed half of Greek voters expect the government won't make it through 2016. People wait to vote at a polling station during the general election in Lisbon, Portugal, October 4, 2015.

It is struggling to balance their demands for a rapid reversal of austerity with the fiscal prudence required by eurozone partners. Meanwhile, investors are getting jittery. Economists at Germany's Commerzbank this week warned Portugal risked becoming a new "problem child" for the EU’s currency bloc.

The last Italian premier to win an election was Silvio Berlusconi in 2008.

Since he was forced out amid sex scandals and looming economic collapse in 2011, the country has been ruled by a succession of premiers picked by backroom deals among lawmakers. Supporters of the Law and Justice Party walk during a pro-government demonstration in Warsaw, Poland, Dec. 13, 2015.

Since being swept into office in November elections, the government led by Poland's conservative Law and Justice party has faced a barrage of international and domestic criticism for seeking to expand control over the media, judiciary, and intelligence service.

"We risk seeing the emergence of a systemic threat to the rule of law," warns Frans Timmermans, vice president of the European Commission, which this month launched an unprecedented probe into whether Polish government policies comply with EU standards.

She wants the European Union to butt out. "Polish affairs should be resolved in our Polish home," she told the European Parliament in Brussels last Tuesday. "Whenever outsiders tried to fix things for us it turned out very badly.”

In power since 2010, and given an extended majority by voters in 2014, Orban has faced similar accusations of authoritarianism for policies restricting the media, activist groups and the courts. Flowers and posters are placed in the square in Cologne, Germany, Jan. 11, where the vast majority of dozens of New Year Eve assaults on women took place.

Differences over Russia and refugees go to the core of Europe's political dilemma. It needs unity and strong governments to confront a slew of problems: Russian expansionism in Ukraine, unemployment, the spillover of Middle Eastern wars and more. Yet voter fright over such issues is fueling ever-more fractious politics.

More from GlobalPost: These European countries are seizing cash and valuables from refugees

France's mainstream politicians are agonizing over how to stem the rise of the far-right National Front before presidential elections next year.

German Chancellor Angela Merkel is expected to run for a fourth term in 2017. But her left-right coalition looks shakier amid unease over her welcoming refugee policies, which has grown since a spate of New Year's Eve sexual assaults on women in Cologne. Support for the right-wing Alternative for Germany party is at record highs.

Meanwhile, Britain could throw Europe into disarray by pulling out of the EU after a referendum expected sometime this year.

This story was cross-posted from our colleages at Global Post.