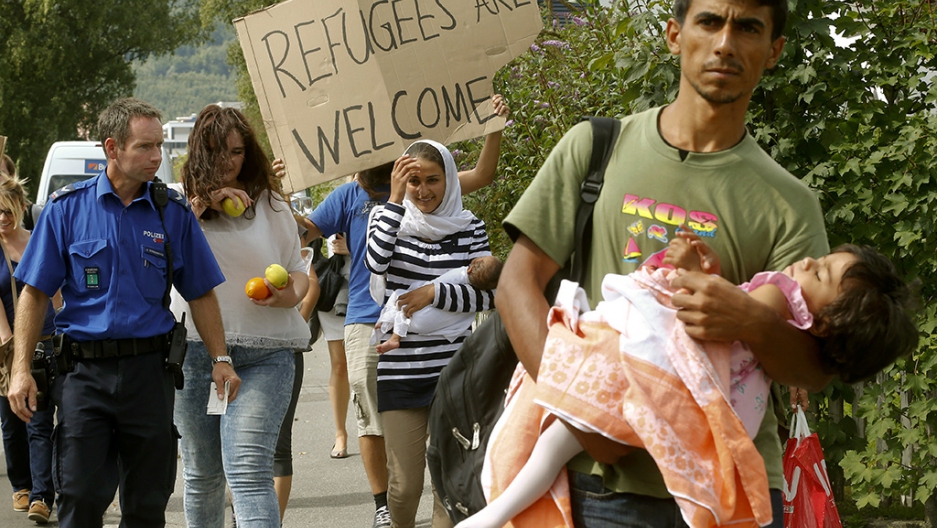 Migrants from Syria arrive at the railway station in the Swiss town of Buchs, Sept. 1, 2015.
Credit: Arnd Wiegmann
Share

KYIV, Ukraine — Refugees fleeing the Middle East and other troubled regions already face daunting challenges when they reach the European Union. But if they choose to stay in Switzerland, Denmark, or Germany, that decision could cost them even more.

Critics have been up in arms lately against regulations that allow officials in those countries to confiscate assets from asylum-seekers to help finance their stay.

The cut-off for when authorities start taking cash and valuables varies from country to country, ranging from $400 to $1,500. It’s one of many measures European officials have taken in recent months to help cope with the continent’s largest migration crisis since World War II.

They also include temporary border controls in the passport-free Schengen zone, which a group of six leading countries were expected to vote on extending this week.

Denmark passed its own legislation Tuesday. Refugees and asylum-seekers who enter with cash and valuables worth more than $1,450 can now have those assets seized, as PRI's The World reported.

Even before the vote Denmark had already been taking flak for what the UN Refugee Agency has called a “deeply concerning response to humanitarian needs.”

Critics have also spoken out over social media. Twitter accounts such as @SaveSwitzerland and @SaveDenmark have popped up, poking fun at what they believe is the hypocrisy of two wealthy European nations that shouldn’t have problems covering the costs of asylum-seekers.

The regulations are reportedly being applied in southern Germany, too, where the vast majority of the country’s refugees enter. But officials there, as well as in Switzerland and Denmark, are defending what they say is a standard federal law with a reasonable foundation — and one that actually promotes equality.

“If you apply for asylum here, you must use up your income and wealth before receiving aid,” Germany’s immigration commissioner, Aydan Ozoguz, told a local tabloid this week.

“That includes, for example, family jewelry,” she added. “Even if some prejudices persist, you don’t have it any better as an asylum seeker as someone on unemployment benefit.”

Meanwhile, Denmark’s ruling Liberal Party has called the Danish measure the “most misunderstood piece of legislation” in the country’s history. Officials there are stressing that authorities won’t be confiscating sentimental items, such as wedding rings.

The Swiss law allows refugees to reclaim their assets if they leave within seven months. According to the BBC, asset seizures in Switzerland took place in only 112 cases out of about 30,000 asylum applications last year.

All that may be so, but it’s unlikely the criticism will ease up any time soon.