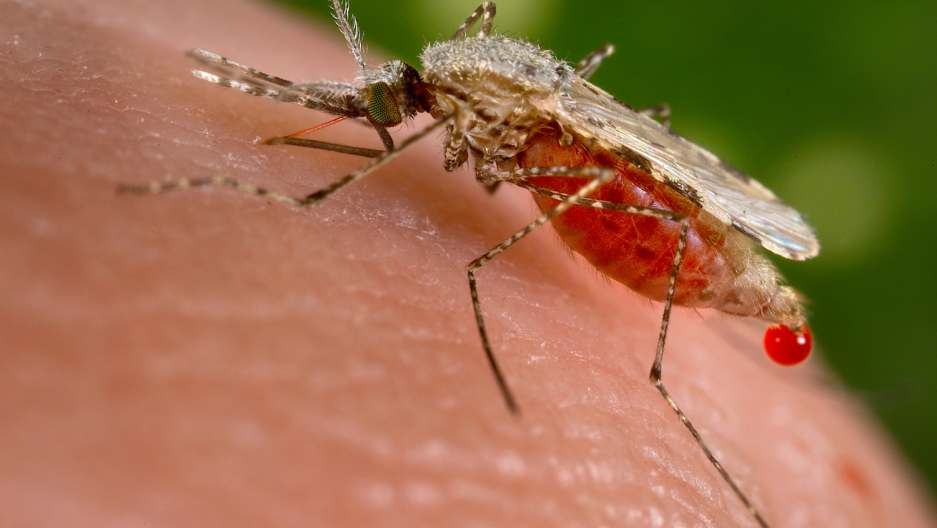 An Anopheles stephensi mosquito obtains a blood meal from a human host through its pointed proboscis in this undated handout photo obtained by Reuters November 23, 2015.

Parents in Brazil are nervous.

There's an increase in microcephaly, a condition when babies are born with unusually small heads. And the increase is being linked to a surge in cases of Zika.

But what exactly is Zika?

"It's related, quite distantly, to yellow fever virus," says virus researcher Derek Gatherer at Lancaster University in England. "Zika was also discovered in Uganda in 1947 in the great lakes region. But there we no reports of any serious illness associated with it."

He says the interest in Zika was so low that no case studies had appeared in the tropical medicine literature from 1947 onward to 2008.

Mosquitos spread Zika. And the classic symptoms are a relatively mild fever and muscle aches. "But in all of the classic cases, until the turn of the millennium, it always resolves successfully and no patients had ever died."

That's not the case in Brazil, where at least five people have died from Zika. Gatherer says it's serious, but still not that deadly when you consider there are 1.3 million case of Zika. "It might represent an indication that Zika is becoming more virulent," he says.

But what's caused real concern — and a CDC travel warning — is the disease's possible connection to the birth defect of microcephaly.

And while Gatherer says nothing is absolutely proven, "I think it would be unlikely if it's not proven to be connected, given what we've seen so far."

Brazilian health authorities announced Wednesday that nearly 4,000 babies have been born with microcephaly since they started tracking the problem in October. That’s compared to fewer than 150 cases in all of 2014.

On Thursday, a new danger from Zika surfaced: paralysis. The New York Times disease specialists in Brazil as saying the virus may cause Guillain-Barré syndrome, in which a person’s immune system attacks part of the nervous system. It is potentially life threatening.

Though Zika outbreaks have occurred elsewhere, the noted association with microcephaly has been new, perhaps because the number of cases during previous outbreaks in places like Micronesia and New Caledonia have been much smaller.

Viruses like dengue fever have been known to pass from pregnant mothers to fetuses, but it’s not yet clear if and how the Zika virus enters the placenta and damages the brains of babies.

The outbreak of Zika and microcephaly is centered in the drought-prone northeastern region of the country, where residents store water in outdoor reservoirs and containers to prepare for periodic water shutoffs. These areas provide ample breeding grounds for the mosquitos that spread Zika.

There is concern, however, that when the rainy season begins in February, the epidemic will spread to the more heavily populated areas around Rio de Janeiro and Sao Paulo.

Currently, Brazilian scientists are trying to better understand virus transmission, speed up the development of a Zika vaccine and come up with a new testing kit.

The army has been called in to Sao Paulo and other states to accompany health workers as they visit homes to identify and remove standing water, and public service announcements are airing on TV and radio. In some areas, mosquito breeding areas are being dosed with insecticides.

In the Brazilian city of Sao Carlos, 18,000 school children are being trained to check homes for mosquito larvae, according to project coordinator Caio Freire.

National authorities are reminding visitors to use insect repellent and long sleeves to avoid mosquito bites.

Meanwhile, the Centers for Disease Control and Prevention in the US last week recommended pregnant women consider postponing travel to Brazil and other countries where Zika transmission is ongoing, including Guatemala, Mexico, Panama and the US territory of Puerto Rico.