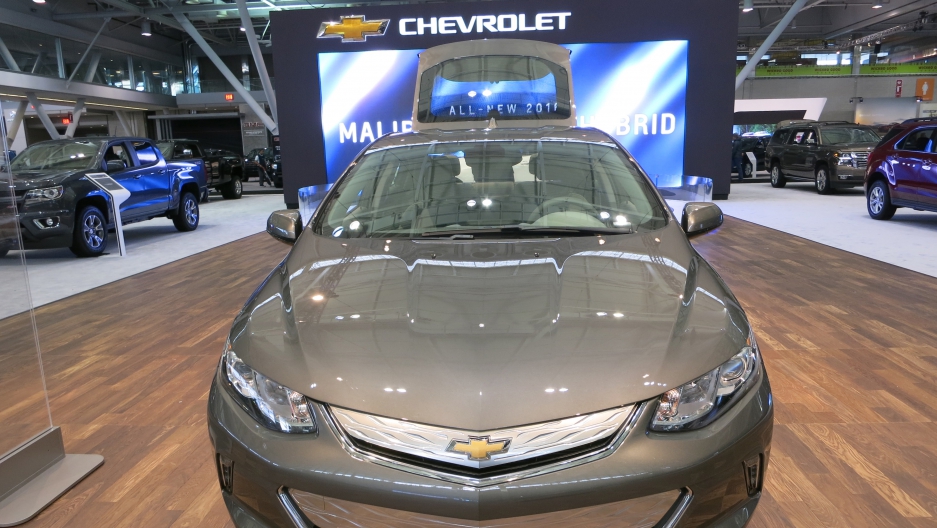 Hybrid vehicles like the Chevrolet Volt were front and center at Boston's auto show.

At the big annual auto show in Boston, cars slowly rotate on circular platforms and company reps tout their latest and greatest offerings. Many of the high-profile vehicles they’re putting front and center this year are green.

“Here at Toyota, we are not shy about our love for hybrid vehicles, sold nearly 8 million of them worldwide,” says Kristi Pourmousa, introducing Toyota’s new hybrid RAV-4.

“It almost becomes like a game to see how many miles you can get before you fill up,” says Kim Carpenter with General Motors, showing off Chevrolet’s Hybrid Volt.

Those hybrid vehicles from Toyota and GM use both gas and electricity. Looking toward the next evolution of vehicles, GM is also unveiling its all-electric Chevrolet Bolt this year.

“And the thing that we’re most excited about at Chevrolet is that it will have a range over 200 miles,” says Carpenter. “And it’s going to be affordable.”

Consumers should expect to see more and more electric vehicles soon in the wake of last December’s United Nations Paris climate summit, where nearly 200 nations agreed to sharply cut greenhouse gas emissions. Coming up with an agreement among that many parties may have been the easy part of the job though. Now, nations, industries, and companies have to reach their targets and transition to a lower-carbon world. The transportation sector accounts for more than a quarter of total greenhouse gas emissions in the US.

Besides the lower-carbon benefits of electric vehicles, John Sterman at MIT’s Sloan School of Management says all-electrics like the Bolt, as well as Tesla’s cars and the Nissan Leaf, are a joy to drive.

“You get max torque at zero rpm out of your electric motor,” says Sterman. “In fact, they have to put governors on them to keep you from snapping your head back with those g-forces.”

All-electrics also have zero tailpipe emissions, which means no harmful pollutants are discharged to impact our health. Of course the electricity to charge those cars has to come from somewhere. And unless that power originates from renewable energy sources, like solar or wind, electric cars still produce greenhouse gas pollution. Other problems with electrics: there’s not enough of them and not enough places to recharge.

“But the energy companies aren’t willing to invest the billions in infrastructure to provide that ubiquitous fueling until they’re sure they’re sure there’s going to be a market,” says Sterman.

A problem is that nobody wants to move first.

The auto industry’s cautious approach toward cleaner, all-electric vehicles is warranted though, says Andrew Hoffman at the University of Michigan.

“Right now you could just be solely focused on electrics, but the market isn’t strong so you’d be crazy.”

Hoffman — who has a dual appointment at the University of Michigan’s School of Natural Resources & Environment and the Ross School of Business — says with the car of the future so uncertain, auto companies need a finger in every pot.

“Electrics, hybrids, fuel cells … because if you bet wrong you could find yourself in trouble,” says Hoffman.

In the meantime, automakers keep putting out good old fashioned cars and trucks with gasoline-powered internal combustion engines. And with gas under $2 a gallon in the US, bigger vehicles are hot again.

This business model won’t last much longer though. A few years ago, the Obama Administration dramatically raised vehicle fuel economy standards, which are scheduled to gradually rise over the next decade. Sharon Basel with General Motors in Michigan says they’re working on higher-performing green vehicles to meet the standards, but consumers have to want their cars.

“It isn’t what manufacturers build. It’s what the public is buying,” says Basel. “The bottom line is getting products out there that customers love.”

Besides cool, green cars, GM has another approach to getting cleaner: diversifying its business. For example, the company is investing heavily in car sharing and ride sharing. Today it announced its new mobility brand that it's calling "Maven."

Ford is taking a similar approach, says John Viera, the company’s global director of sustainability.  He says Ford is shifting from a 20th century manufacturing company to a 21st century “mobility company.”

For example, Viera says when Ford looks at megacities in the developing world, they don’t see a lot of space to sell cars.

“If we still want to move around people and goods, and now we’re talking about a congested city, what we really need to be thinking about now is not producing more cars for people to buy because they won’t be able to move around, but how do we get creative?”

Creative ideas like automated vehicles or combining cars with other modes of transportation.

“We’re actually doing some experiments with what we call 'e-bikes,' with electronic bikes that could actually be packaged nicely in one of our vehicles,” says Viera. “You drive the vehicle let’s say to a certain location, you get out your e-bike, and you take that around in the city.” 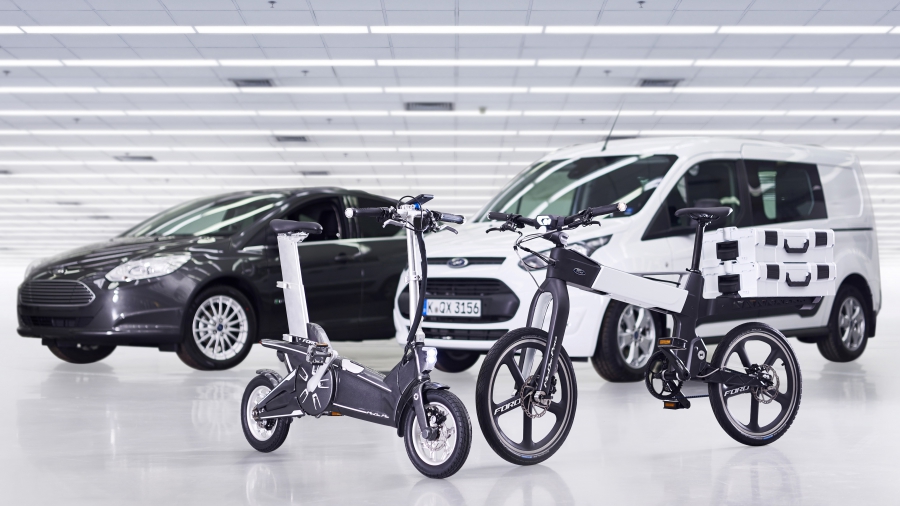 Ford's electronic bike will be able to fit into a car and be used to move around a city.

John Sterman at MIT says fewer cars, and by extension fewer roads and parking spots, would not only be better for the environment, it would be better for how we live.

“We have a huge opportunity if we can get people to move into different forms of mobility to give us back some of the most valuable, precious real estate we have,” says Sterman.

More parks, more green space, less congestion, it’s hard to fault that vision. But the car has been at the center of modern life for so long — quickly and radically shifting how we live will take buy-in from consumers, too.